“I am the future of the Sith!” 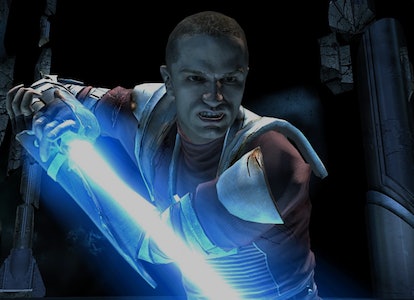 Andor occupies an unusual slice of the Star Wars timeline. Aside from Rebels, there’s no other movie or TV show that captures the crucial years when the Rebellion was just getting its start. We see the peak of the Rebellion in Rogue One and the original trilogy, but its grassroots beginnings among everyday citizens is totally unknown. It’s this uprising that Andor hopes to capture, but it’s not totally new ground for die-hard Star Wars fans.

Deep in Star Wars Legends (the books and video games de-canonized by Disney), the character who truly started the rebellion was actually a Sith — and not only was he a Sith, he was working under the most powerful villain in all of Star Wars. Could Starkiller show up in Andor and play a crucial role in the new canon as well?

As the son of two Jedi knights who married in secret, Galen Marek was born a Legacy Jedi. Before Order 66, his parents fled the Order and settled on Kashyyyk, where Darth Vader eventually found them. Galen’s parents were murdered, but Vader sensed extremely strong Force powers from the boy and took him under his wing.

Over the years, Galen Marek grew to become a strong Dark Side Force user, but because of the Rule of Two, Vader couldn’t truly take him on as an apprentice. So Vader kept their training secret and referred to the boy as “Starkiller.” (No relation to Starkiller Base.)

Galen Marek was the protagonist of Star Wars: The Force Unleashed, which focused on his rise as a Sith Lord. One of his final missions, however, makes him question everything. In preparation for a plan to overthrow Darth Sidious, Vader asks young Galen to sow unrest and rebellion in the Empire. This puts him on a path that intersects with Leia and Bail Organa.

There are two different endings to the game, but the one that’s accepted as canon is the “Light Side” ending. In it, Galen sacrifices himself in order to save his allies. (Andor opens in the year 5 BBY and is set to connect to Rogue One, which takes place in 0 BBY.)

How does this factor into Andor? Well, they both cover the initial moments of the Rebellion, and including Garek would be a perfect way to knock out two narrative birds with one stone. He’s both a Force user with complicated morality (basically a Star Wars staple) and a direct connection to Darth Vader (see previous parentheses).

I know what you’re thinking — Galen Marek and the Sith haven’t been spotted anywhere in promotional materials for Andor, and it’s releasing in only a couple of weeks. But Andor’s already been greenlit for 24 episodes, two different batches of 12. The first 12 can re-introduce the Cassian Andor character, and the back half can focus on this facet of the Empire and the Sith that we haven’t seen before.

And even if Lucasfilm was preparing to bring this fan-favorite Sith back into canon, there’s no way the studio would give it away in a trailer, right?

Andor premieres on Disney+ on September 21.