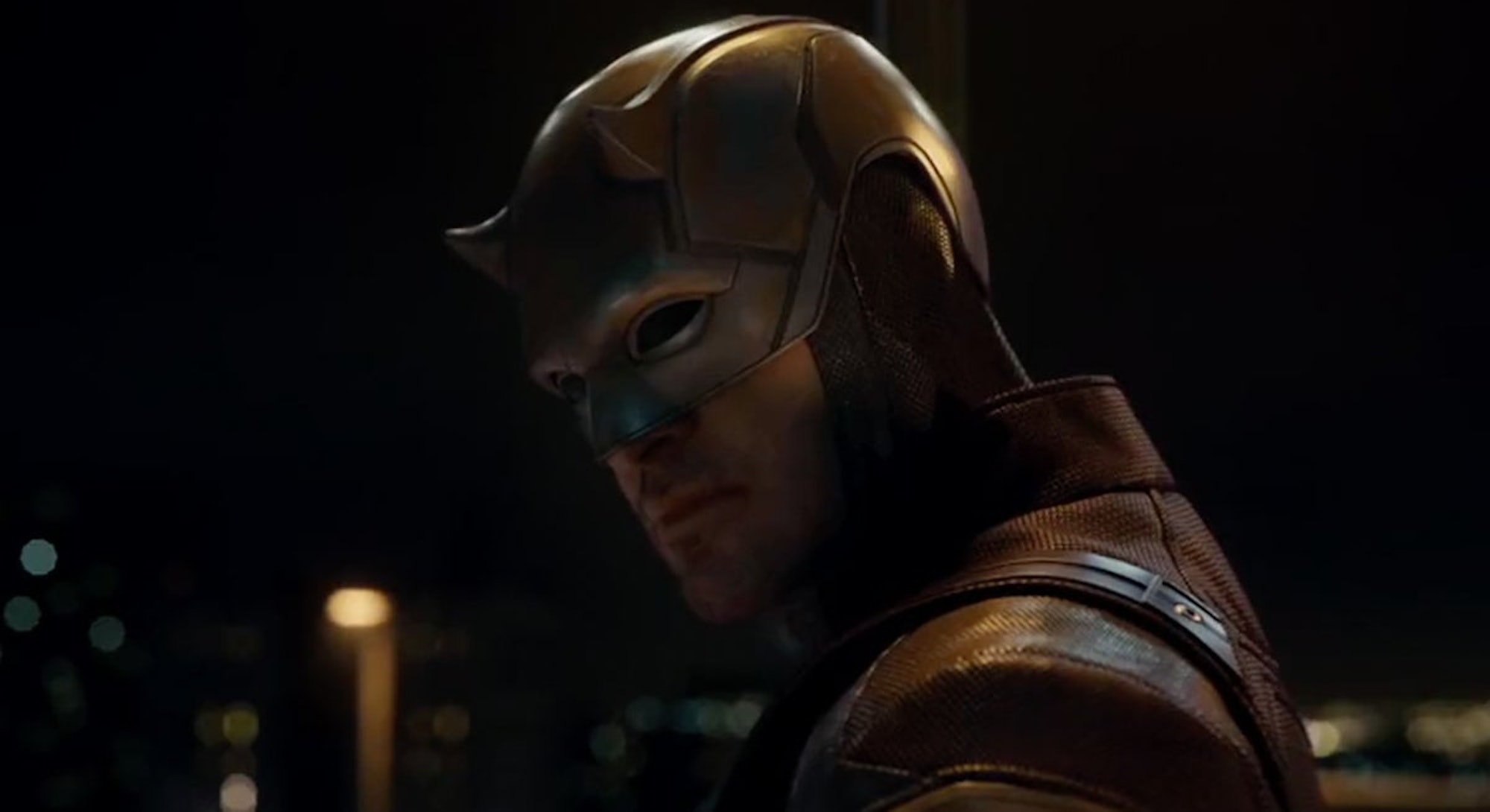 Don’t call it a second coming.

The reveal of a new 18-episode Daredevil series, Daredevil: Born Again, on Disney+ was one of this year’s most buzzed-about announcements. It’s been four years since Daredevil concluded on Netflix, and since that time fans have been clamoring for ‘ol hornhead’s return with #SaveDaredevil hashtags and support for the series stars, including Matt Murdock himself, Charlie Cox.

For nearly a year, Marvel has been laying the groundwork for the character’s triumphant return. The inclusion of the Kingpin (Vincent D'Onofrio) in Hawkeye, Matt Murdock coming through in a clutch as Peter Parker’s (Tom Holland) “really good lawyer” in Spider-Man: No Way Home, and the most recent appearance from Daredevil in She-Hulk: Attorney At Law, have all whet fans appetites for more Daredevil. Yes, he’s back. But when it comes to Born Again, the character will need to be approached differently from the Netflix series in order to sustain new stories.

Face it, folks, if Murdock wants to go the distance, the MCU reboot needs to move on from Frank Miller. These other comic creators could reveal what Born Again will look like.

There’s no denying Frank Miller’s incredible contribution to Daredevil. From creating new concepts and characters like The Hand, Stick, and Elektra, re-fashioning classic villains as Daredevil’s nemesis, like Kingpin, and Bullseye, to telling from of the Man Without Fear’s most iconic stories, Miller is the first name most comic readers think of when they think Daredevil. But, much like Miller’s equally iconic contributions to Batman, this material has been mined quite thoroughly several times over.

No, Daredevil will never be able to entirely outrun Miller’s shadow as he established so many of the core concepts and styles associated with the character. Every writer and artist to follow his run owes anywhere from a little to a lot to Miller, but the best ones have also managed to put their own stamp on the character in a way that’s been additive to the character’s mythology. So yes, even though the title, Born Again, is a reference to one of Miller’s most acclaimed Daredevil stories, which served as the basis for Season 3 of the Netflix series, the groundwork set for the Disney+ promises something different in store.

One of comics' most prolific female writers, Nocenti put her stamp on Daredevil during a four-year run from 1987 to 1991. Nocenti maintained the edge Miller had brought to the character but also re-focused Daredevil’s efforts on social justice during a time in which comic creators weren’t particularly interested in tackling such heavy issues.

From alcoholism, drug abuse, mental illness, sexism, and racism, Nocenti captured the urban decay left in the wake of the Reagan era. Typhoid Mary, a dissociative identity disorder-affected vigilante/villain who was introduced in Iron Fist season 2 and played by Alice Eve, became one of the most notable character introductions from her run. She also pit Daredevil against supernatural adversaries, including the son of Mephisto, Blackheart, taking the character out of his more grounded comfort zone.

Born Again could be well served by taking a hard look at social issues and really putting Matt’s law degree to the test. And given Marvel’s expanding supernatural corner, seeing Daredevil battle some literal devils would be a fun way for the series to distance itself from what came before. And hey, let’s get Alice Eve back as Typhoid Mary too, complete with the face paint this time.

While Mack, Bendis, and Brubaker’s runs were separate, one led directly into the other with such a smooth transition that they really feel like part of the same era. All three writers had a grounded approach to the character that harkened back to Miller’s tenure, though further drew him into the orbit of Marvel’s street-level heroes like Spider-Man, Luke Cage, Iron Fist, and Jessica Jones. Mack introduced Echo and blinded the Kingpin, elements we saw play out in Hawkeye and which will seemingly drive Echo’s (Alaqua Cox) self-titled series, in which Daredevil is heavily rumored to play a significant part in before Born Again.

Bendis introduced a new love interest for Murdock, Milla Donovan, who is also blind. Most of the arcs focused on Matt Murdock’s secret identity being exposed and Matt Murdock’s mental breakdown, followed by his arrest by the FBI, for which he is sentenced to prison. Given how heavily Mack’s work has already influenced Daredevil’s return, it seems natural that Bendis and Brubaker’s runs will play heavily into Born Again, given the popularity of the stories and the fact that both authors’ works have been instrumental in building the MCU. And of course, their runs are also the quickest means to reunite Murdock with Jessica Jones (Krysten Ritter), Luke Cage (Mike Colter), Iron Fist (Finn Jones), and The Punisher (Jon Bernthal), and yes, Spider-Man

Waid is often credited with pulling Murdock out of the dark, bringing the character back to his roots as a charming swashbuckler. This doesn’t mean the writer was beyond tackling tough issues, but his run alongside artists Paolo Rivera and Chris Samnee was notable for its more colorful depiction of Daredevil’s world of heroes and villains, and a less traumatized Matt Murdock who went back to relying on his wit more than his self-abuse.

As is a Daredevil constant, issues protecting his secret identity persisted, along with new adversaries in the form of the Purple Man’s offspring, the Purple Children. Waid gave Matt a new love interest in the form of district attorney Kristen McDuffie. He even moved Daredevil out of Hell’s Kitchen and took him to San Francisco. This iteration of the character seems to heavily influence Daredevil’s appearance on She-Hulk: Attorney at Law, where Murdock is enjoying his time as Daredevil and isn’t afraid to wear a smile. Given the popularity of Waid’s Eisner-winning run, and the popularity of the character’s appearance in She-Hulk, Born Again will most likely be primarily inspired by this take.

An actual lawyer took the reigns of Daredevil in 2015. Soule had the tough task of not only following Waid’s run but also writing the book during the period in which the Netflix show was running. Soule managed to find the best of both worlds, picking up on threads from Waid’s run while also bringing Daredevil back into the shadows, with a depiction that fans of the Netflix series could more easily recognize, including a black costume.

This run gave Daredevil a vigilante partner, Blindspot, and established Kingpin as Mayor of New York, both elements which are rumored to play into Born Again. Soule also delivered some of the best legal-central stories for the character, something that we definitely want to see more of in Born Again. The court cases should be just as compelling as the vigilante crime-fighting. While Born Again may feature a less broody Daredevil, I suspect Soule’s run will come second in the reference collection when it comes to positioning Daredevil in the larger MCU.

Daredevil is currently soaring under the pen of Chip Zdarksy, but his tenure isn’t completed and Marvel Studios always has a bit of a runway before they start adapting contemporary comics. That run, and Matt’s partnership with Elektra, who has also taken up the mantle of Daredevil, is certainly one to keep an eye on in the future.

One thing is certain. With all the great writers and artists who have lent their talents to Daredevil over the decades, the Devil will get his due.