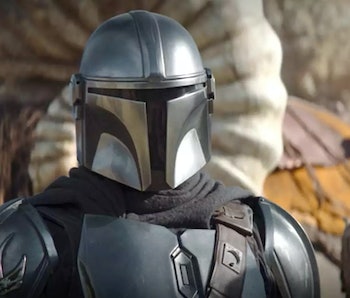 Damon Lindelof is ushering in a new era of Star Wars. The showrunner, best known for his work with shows like Lost, The Leftovers, and 2019’s Watchmen, is slated to co-write a Star Wars film that will join Taika Waititi’s and Kevin Feige’s in the development process. But according to a Hollywood Reporter article, this project may have a special cameo planned. Here’s how Lindelof’s work could change how we look at The Mandalorian.

THR reported that Lucasfilm gathered a secret writer’s room, which included Lucasfilm representatives and creatives Lindelof has worked with, to brainstorm ideas for this new project. The movie will reportedly will take place after The Rise of Skywalker and, notably, THR claimed The Clone Wars creator and The Mandalorian co-showrunner Dave Filoni might have been present at the meeting.

But why would Dave Filoni, who works within the timeline of the Skywalker Saga, be consulted for a new movie set after it? Redditor LordUltimus92 theorized that one of Dave Filoni’s most treasured creations will appear in Lindelof’s film, and so he was on hand to consult and ensure the crossover was handled well.

The theory suggests the movie will feature Grogu, but in a future where he’s outgrown his egg-gobbling, baby-babbling stage. Because his species ages slowly, that doesn’t really narrow down when the film could take place. In The Mandalorian, Grogu’s 50 years old and can barely communicate, so to see a grown-up Grogu we may have to jump ahead centuries.

This theory is based on several big assumptions. THR didn’t confirm Filoni’s presence at the meeting, nor do we know for sure when Lindelof’s Star Wars movie is set. Still, it makes sense. Now that the sequel trilogy and the Skywalker Saga are over and done with, the Star Wars movie universe may want to look forward while still keeping ties with its current canon.

Interestingly, the reverse approach is unfolding in another facet of the Star Wars universe. The High Republic series of novels and comics is set centuries before the prequel series, yet they still share a character with the main Star Wars continuity: A younger Yoda. This movie could do the same from the other end, telling a new story in a new era while still keeping a common element.

It would be smart to move beyond the mediocre sequel trilogy while reminding viewers of the popular TV shows. However, this would change the way we watch The Mandalorian. While we currently see the series as a sequel to the original trilogy, getting to know an older Grogu would make it seem more like another prequel. If we know where the little green guy ends up, will we really be worried when he’s inevitably kidnapped by another villain? It’s a calculated risk Lucasfilm may have to take.