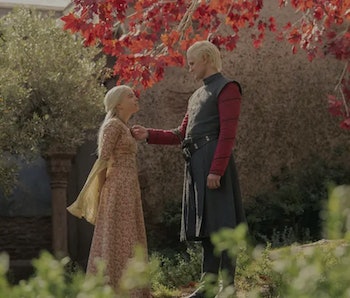 In the spirit of its predecessor, the latest episode of Game of Thrones prequel series House of the Dragon not only has an incestuous sex scene between uncle Daemon and niece Rhaenyra, but also a wedding to really hit the Targaryen Exceptionalism home.

Major spoilers for Episode 7 of House of the Dragon ahead.

Much like the incestuous couples of Game of Thrones, inbreeding isn’t off the table for Daemon (Matt Smith) and Rhaenyra (Emma D’Arcy). While each recent widow (and newlywed) has their own set of children from separate marriages —  for Rhaenyra, three sons with Ser Harwin Strong and, for Daemon, two daughters with Lady Laena Velaryon — they will now be expected to produce cousin-children for more potential heirs to the Iron Throne. But, unlike the star-crossed sibling Lannister lovers Jaime (Nikolaj Coster-Waldau) and Cersei (Lena Headey), the Targaryen princess and prince will be encouraged to have kids, rather than punished for it.

Up until Episode 7, House of the Dragon has been mostly faithful to its source material, clinging to the fictional medieval-fantasy history delineated by George R.R. Martin in his A Song of Ice and Fire prequel texts. But Episode 7 of HBO’s HOTD takes an unexpected — and, arguably, better — turn when it comes to the fates of Laenor Velaryon (John MacMillan) and Ser Qarl Correy (Arty Froushan). (In the books, Qarl kills Laenor and then himself. In Episode 7, Laenor’s murder is only faked, and we later see him escaping with Qarl. Daemon and Rhaenyra planned his “disappearance” so they could get married.)

Which leads to the question: If the series is willing to twist canon in this case, will House of the Dragon return to its roots and follow book canon when it comes to Daemon and Rhaenyra’s marriage? Or might the show’s writers’ room surprise us again?

The spinoff series is seemingly confirming that, due to their consensual sexual interest in one another, Rhaenyra will bear Daemon’s children. In the books, they have three: daughter Visenya, who does not survive infancy; and two sons, Aegon III and Viserys II, who will grow up to be next Kings of the Andals, the Rhoynar, and the First Men. How Aegon III and Viserys II wind up on the Iron Throne may veer into serious spoiler territory for the rest of House of the Dragon Season 1 and its confirmed second season, so we’ll hit pause in recounting the Targaryen dynasty tree there. For now.

The Inverse Analysis— HBO had its chance to keep Daemon a power-hungry murderer and detestable groomer who only has love for the Iron Throne. Instead, the show “redeems” Daemon, romanticizing his union with Rhaenyra and then doubling-down on his potential for goodness by sparing Laenor from death. In doing so, the show is practically begging audiences to “ship” the uncle and niece as a dynamic duo that makes each other genuinely happy, a characterization of the incestuous relationship that is more aligned with book canon.