“Maybe I wasn’t prepared to be here tonight.” 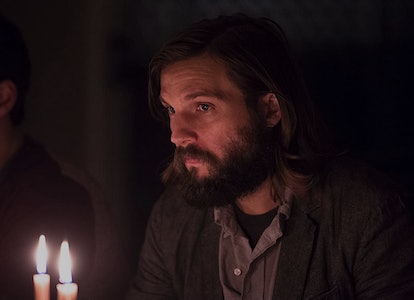 Going to a normal dinner party is already stressful enough. Making conversation for hours with a random assortment of friends, acquaintances, and strangers is one thing. But when the host of the party is your ex-wife and she invited a few friends from the cult she just joined, well, that’s even worse.

This isn’t just a scary scenario meant to twist the knife as we all prepare for an awkward return to post-Covid polite society, it’s the plot of one of Karyn Kusama’s best films. The director behind misunderstood cult classic Jennifer’s Body followed that movie up with one about an actual cult.

The Invitation is one of Kusama’s best and most underrated movies. Lucky for you, it’s streaming now on Netflix. But before you fire up your TV and microwave some popcorn, there are a few things you should know.

The Invitation tells the story of a very uncomfortable dinner party. The guests are a friend group that’s been fractured by the divorce of Will and Eden. The movie quickly makes it clear that the absence of their child is to blame, but the painful details aren’t revealed until much later.

Meanwhile, the entire party slowly plays out. Will brings his girlfriend Kira, and Eden and her new husband David are hosting in what was once Will’s home. Like I said: it’s awkward, but that’s still better than what comes next.

It soon becomes obvious that Eden and David are part of a cult. Another member, Pruitt (played by classic “that guy” actor John Carroll Lynch, who sticks out in a cast of unknowns), shows up. He tells a very personal and upsetting story during what’s supposed to be a fun party game. It gets even more awkward.

The trick to The Invitation is that for most of the movie, you’re never really sure if Will and his friends are in danger, or if he’s just feeling paranoid because he’s at a dinner party with his ex-wife, her husband, and their guru. Will floats through the house he once called home as old memories play out onscreen, filling in so many blanks without revealing what comes next.

Eventually, the party moves from the living room to an upstairs dining room, and The Invitation pivots from tense to outright violent. I won’t reveal who’s inflicting the violence (the movie’s best moment is a series of rapid-fire twists that will completely confuse you before finally revealing the truth), but trust me when I say that the slow build-up is worth the wait.

In a 2016 interview with SlashFilm, Kusama revealed one particularly interesting detail worth keeping in the back of your mind as you watch The Invitation. The plot of the film was influenced directly by the house it was filmed in. Specifically, the fact that the dining room was upstairs (which is kind of weird when you think about it) altered both what comes before and after the movie’s most pivotal scene.

“This house was unusual because the space for the dining room was upstairs,” Kusama said. “It created this interesting moment in the story where it was sort of like, OK, the pre-dinner party is over and now the night will begin. So we were able to sort of move everybody upstairs in this way that I felt kind of had a sort of interesting metaphorical possibility in terms of just sort of seeing everybody move to this next level, literally.”

The Invitation makes the most of its setting, from the layout of each room in the house to the specific way the living room window frames the front lawn. You constantly feel both the sprawling possibilities and claustrophobic limitations of this mansion on a hill.

Again, that’s no mistake, and it took three days of rehearsal to get the most out of that space.

“The rehearsal process was so useful for me, first and foremost, to really understand the physical movement of the night,” Kusama said. “Because we really shot the whole movie in that house and had to be…just had to be kind of confined to the house. I just needed to understand the space really well and understand sort of where characters were moving to, when they kind of departed from the group, departed from the action, and when they wanted to kind of be a part of things again. All of that stuff just made the night feel more real to me once we could kind of make those decisions.”

Whatever Kusama did, it worked. The Invitation is a powerful exploration of the absolute worst-case scenario for your first dinner party after the pandemic. It’s a movie that will stay with you long after it’s over, thanks in part to a stunning final shot with far-reaching implications. (Are we ever getting a sequel, Karyn?) Just remember: there’s almost no chance the next party you go to is as bad as this one.

The Invitation is streaming now on Netflix in the U.S.