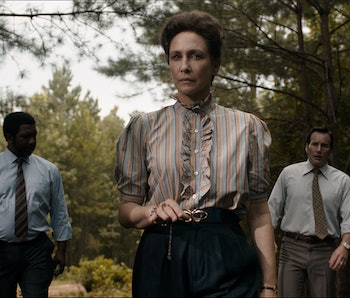 In the newest entry in the Conjuring Universe, the Warrens hit the road. In The Conjuring: The Devil Made Me Do It, Ed and Lorraine Warren figure out a case of demonic possession that, believe it or not, made its way to the Connecticut Superior Court in 1981.

While the movie, directed by Michael Chaves (The Curse of La Llorona), dramatizes the real events of the 1981 Trial of Arne Cheyenne Johnson, often known as the “Devil Made Me Do It” case, still contains a twisty plot full of demons, cults, and monsters fans of the Conjuring Universe come to expect.

Here’s what happens at the end of The Conjuring: The Devil Made Me Do It, as well as how it compares to the real 1981 murder case.

The Conjuring 3: The Devil Made Me Do It ending explained

Warning: Spoilers for The Conjuring: The Devil Made Me Do It ahead.

In The Devil Made Me Do It, Ed and Lorraine Warren (Patrick Wilson and Vera Farmiga, reprising their roles of Ed and Lorraine respectively) enter the 1980s as they participate in an investigation of the trial of Arne Cheyenne Johnson, played in the film by Ruairi O'Connor.

Both in the real-life case and in the movie, Arne is accused of murdering his landlord (Alan Bono in real life, Bruno Sauls in the movie) a few months after being possessed by a demon that last took up residence in 11-year-old David Glatzel (Julian Hilliard, WandaVision).

With Arne on trial, the Warrens figure out the origins of the demon that possessed David and Arne. They soon figure it was through a totem left by an occultist who was a devout member of the Disciples of the Ram. The Warrens consult a contact of theirs, a former priest named Kastner (John Noble, Lord of the Rings). They soon learn that in order to break the curse that now plagues Arne, they must destroy the altar belonging to the Occultist who made the curse must be destroyed.

But as the Warrens find out, Kastner’s daughter Isla (Eugenie Bondurant) had developed an interest in the occult, joining up with the Disciples of the Ram despite his protesting. Because this is a movie, it is of course Kastner’s daughter Isla who made the curse. The climax of the movie has the Warrens in Kastner’s basement, confronting Isla and destroying her altar to free Arne of the demon that possesses him.

While the Warrens broke the curse, the movie ends similar to how the real case ended: Due to the difficulty of proving the supernatural forces that the Warrens claimed haunted Arne, Arne is convicted of manslaughter and served five years. However, Arne married his sweetheart Debbie Glatzel (the older sister of David, played by Sarah Catherine Hook) whilst in prison; the movie ends with the claim that the two are still married to this day.

How much of The Conjuring 3 is a true story?

Naturally, there’s a lot to dismiss immediately with The Devil Made Me Do It. Whatever your beliefs, it’s safe to say zombie corpses and occult witches are maybe just the filmmakers being as Hollywood as possible. But here are some interesting broad points to keep in mind:

As far as the filmmakers are concerned, the mere fact the case was “real” is enough.

“It’s one of [the Warrens’] darkest cases,” Chaves said in a Zoom press conference attended by reporters. “These are always marketed as the ‘darkest Conjuring film,’ and I think in so many ways this really is. When you look at the case, it’s one fo their most controversial cases. I think the whole thing is just so fascinating.”

As if to drive home the story’s “realism,” the movie’s credits contain real audio of David Glatzel’s possession. Said Chaves:

“Maybe you’re totally a sceptic, maybe you don’t believe in demons or God or any of that. But you can’t listen to that tape and say that something powerful was not going on there. You can’t listen to it, and not connect to the emotion in that, connect to the real terror that that family was going through. I was raised Catholic, I’m always a sceptic, but always someone who wants to believe. And so I always go back and forth. James always talks about finding the emotion and really delivering the emotion.”

Will there be a Conjuring 4?

The Conjuring Universe is one of the most successful post-Marvel film franchises, with spin-offs like Annabelle and The Nun that dive into the histories of the relics and horrors known to the Warrens. Furthermore, the main Conjuring still has decades to cover until it catches up to when the Warrens “retire”; Lorraine, who died in 2019 at age 92, stopped investigating after Ed died in 2006. So, it’s safe to say the Conjuring isn’t going anywhere just yet.

At the press conference, Chaves hinted at the future of Conjuring staying in the ‘80s to explore the era of the Satanic Panic. “Lorraine during the ‘80s would work with detectives and police departments,” explained Chaves.

“It was a time that people forget, but there were actually a lot of psychics and clairvoyants working with police departments, so much so that the Department of Justice actually issued a handbook in 1989 because so many departments were working with psychics. They were like, ‘We need to actually formalise some kind of working rules of working with psychics.’ The other thing in the ‘80s is that this is the dawn of the Satanic Panic. I think there were a lot of cool textural things that it plays as a backdrop in this movie, and it’s kind of fodder for something that could be explored in future cases.”

The Conjuring: The Devil Made Me Do It is now playing in theaters and streaming on HBO Max.

More like this
Entertainment
14 hours ago
Hellraiser (2022) is the best horror reboot since Halloween (2018)
By Jake Kleinman
Culture
Sep. 23, 2022
You need to watch the best legal thriller of the century before it leaves HBO Max next week
By David Grossman
Culture
Sep. 27, 2022
8 thrilling sci-fi movies and shows new on HBO Max and Netflix in October 2022
By Robin Bea
Related Tags
Share: