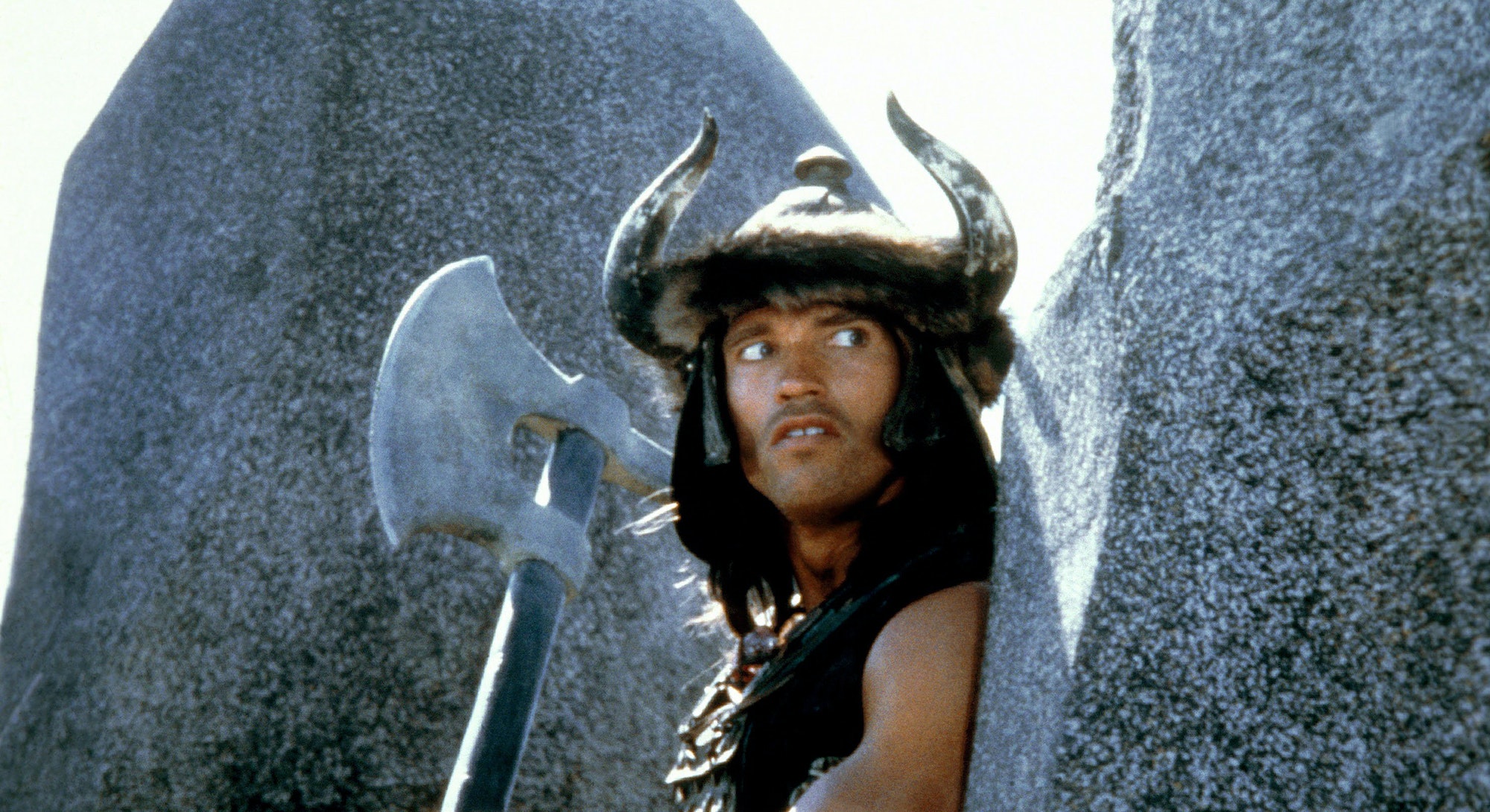 Conan The Barbarian’s producer Ed Pressman first had an inkling that it would be successful years before the action epic was actually released.

“I was walking in New York with Arnold [Schwarzenegger]. He hadn’t even done a picture yet and people were treating him like a star from the very beginning,” Pressman tells Inverse. “They responded to him with unusual interest. They’d come up and ask, ‘Who is this guy?’”

40 years after Conan The Barbarian grossed nearly four times its $20 million budget and became a cult classic thanks to its home video release, it’s safe to say Pressman’s hunch was correct.

Even now there’s something deeply fascinating and gripping about the film. For those of you that need a reminder, Conan The Barbarian tells the story of an orphaned boy who watches the evil Thulsa Doom (James Earl Jones) destroy his village and murder his parents. He’s then enslaved for years and forced to push “The Wheel Of Pain.” Once he’s an adult he finally breaks free and travels across the beautiful land of the Hyborian Age to gain his revenge.

“I think it might have been an early version of a superhero,” says Cassandra Gava, who portrays the Witch in Conan The Barbarian. “It’s about someone beating the odds, taking their revenge, and stamping out evil. It had a universal appeal.”

“It was a bigger version of this sort of film than audiences had ever seen,” adds Pressman. “It was more original and cutting edge, and Arnold was the centerpiece of it all.”

Conan The Barbarian’s origins actually start with another movie. Filmmaker George Butler was putting together his documentary Pumping Iron, about the 1975 Mr. Universe and Mr. Olympia competitions when he asked his good friend Pressman to watch an early screening and provide feedback.

“I couldn't help but react to Arnold's presence in that film,” Pressman says. “That's when I first really focused in on him.”

He immediately started to think about what sort of character Schwarzenegger could bring to life on-screen.

“His presence was undeniable,” the producer continues. “At that point, I didn’t know about Conan The Barbarian, but when I looked at the covers of the magazines and books, I could see it was Arnold.”

Even after Pressman sat down to meet Schwarzenegger for the first time, it still took several years to make Conan The Barbarian.

“I never had a doubt during all those years that if we could get the financing together we would make a major film,” says Pressman, who spent this time “getting the legal situation straightened out” because the “rights [to the film] were so splintered.”

Lancer Books had initially bought the rights to Robert E. Howard’s Conan stories back in 1966, but they’d been frozen due to the company’s financial issues.

After Pressman took a major interest in the property, it took him two years to secure the rights. During this time, he was in legal disputes with Howard’s literary agent Glenn Lord and L. Sprague de Camp, the writer who had brought Conan The Barbarian to a wider audience in the 1960s.

Ultimately, in 1977, Conan Properties Incorporated was formed by Lord and de Camp to handle all of the licensing details for the character, and shortly after Pressman finally had the film rights he desired.

Once that “real mess” was sorted, Pressman then had to find financing. After being rejected by all of the major studios in Hollywood, Pressman finally sold the project in 1979 to legendary Italian producer Dino De Laurentiis, who brought in his daughter Raffaella to produce.

All the while, Oliver Stone had been “developing a script without a director,” says Pressman. Fresh off winning the Best Adapted Screenplay Oscar for Midnight Express, Pressman believes that Stone was interested in directing Conan The Barbarian, too.

“We developed a script without a director,” says Pressman. “Although, Oliver in the back of his mind really wanted to direct it. But it was difficult to get a studio to back him as a director.”

Instead, they wanted a more established filmmaker to oversee its blend of action, fantasy, sci-fi, history, and adventure.

After traveling to London to meet and be rejected by Ridley Scott, Adrian Lyne, and a number of other directors, Pressman found the perfect man in John Milius, who’d written The Magnum Force, Apocalypse Now, and Jeremiah Johnson and directed Dillinger and The Wind And The Lion. It also didn’t hurt that he lived just three blocks away from where they were working on the film in Los Angeles.

“John saw it as a great literary masterpiece, which most people didn’t understand,” says Pressman.

However, Milius and Stone soon started to butt heads. Specifically, Milius had issues with Stone’s incredibly “ambitious and way too expensive” 150-page script for Conan The Barbarian.

Pressman says that Milius had “his own idea of what the script should be.” While he took inspiration from Japanese films like Kwaidan and Seven Samurai, Milius also stayed true to the raw emotion of Howard’s original Conan stories, as he wanted the character to react in an instinctive and intense fashion.

As a result, Pressman admits that “there was a fractious relationship between” Milius and Stone. Despite these issues, Pressman insists the pair’s talents and sensibilities meshed perfectly. “John was great with action. Oliver was always great with character work.”

“Pick up the cup. Look to the left. Look right.”

Pressman’s unerring confidence in Schwarzenegger meant that, even though he’d only had bit parts in a handful of feature films at that point, Milius didn’t consider any other actors for the leading part. His only request was for Schwarzenegger to look more athletic, which meant the Austrian had to undergo an 18-month training regime that included running, weight-lifting, horseback riding, rope climbing, and swimming.

“Arnold had such affection for Milius,” says Gava (the Witch). “It was his first major film, so Milius would guide him through a lot of stuff. He would say to him, ‘Pick up the cup. Look to the left. Look right.’ It was very specific and moment to moment.”

While Schwarzenegger’s role as the titular barbarian had practically been guaranteed by Pressman, Gava’s casting was much more unconventional. First of all, she only heard about the audition by accident because her friend was going for the part.

“We all had to perform the orgasm scene,” says Gava. “I was outside listening to everybody. I just kept thinking, ‘This doesn’t sound organic. Everybody is going through the motions.’”

Cassandra Gava on the set of Conan the Barbarian.Vues de Vestel Tiva/Facebook
A costume fitting.John Bloomfield

So Gava quickly formulated a plan for how she could stand out.

“I was crawling around and basically grabbed [John Milius’] boots, started playing with them, and built up to it by stroking the leather,” she says. “I remember he had these big brown leather boots that went up to his knees. Then, at the culmination point, I yanked them off. Everybody was shocked. They looked at me like I was insane. I don’t even know if you’d be able to do that in an audition today. I just had this attitude of, I have nothing to lose.”

Once filming began in Shepperton Studios, England, in October 1980, before moving on to Spain, Gava says that the entire cast and crew came together to form a little family. They cooked for each other and everyone seemed to “just be having fun.” They even managed to stay positive when the production came face to face with the attempted Spanish coup d’etat of February 23, 1981.

“They all loved Arnold.”

“We were eating food in this cool cafe when all of a sudden we heard all this noise. Somebody told us to get under the table,” says Gava. “We all did and shut the blinds. We sat under the table for an hour so, grabbing food and eating it under there.” Luckily, production was only shut down for a few hours. If the disagreement had escalated, though, Gava had her own plan for how to end it. “I remember saying to Arnold, ‘You better go out there and save the day.’”

Early test screenings for Conan The Barbarian immediately proved audiences were just as enamored with Schwarzenegger as both Gava and Pressman.

“It was a very targeted audience, but they all loved Arnold,” the producer says. “The reaction from the sneak previews was huge. It was supposed to open in early summer, which around then for Hollywood was June. But we moved it up to May.”

Premiering on May 14, 1982, Conan The Barbarian debuted at number one at the box office.

It proved that Schwarzenegger had a huge appeal, securing his place as a Hollywood action star. More than that, it kick-started his domination of the genre for the next decade and beyond.

Soon enough, rather than being gawked at on New York streets, he couldn’t even walk down them without being mobbed. Not bad for an Austrian bodybuilder.