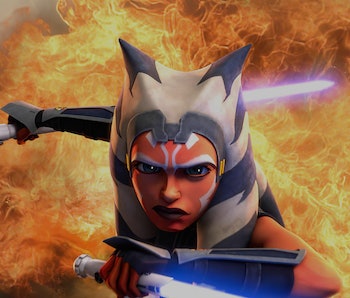 This isn't the older Ahsoka we saw on Rebels and certainly not maybe-ghost Ahoska we briefly heard from in The Rise of Skywalker. Chronologically, The Clone Wars season 7 will occur right before the events of Episode III: Revenge of the Sith, proving we can't get enough of Anakin's tipping-point phase.

This season will also deal with the fall of Mandalore and the return of Darth Maul. Here's an easy-breezy way to reacquaint yourself with the most tumultuous era of Star Wars.

In terms of stuff that will matter for Season 7, you can totally skip the first 3 seasons altogether. You could argue Clone Wars doesn't really get going until Season 4. In this two-episode arc, you'll find out how Darth Maul came back to life and why he's soooo pissed. These episodes are the most important to understanding how the character changes from the time of the prequels.

Watch these episodes on Disney+ here.

Here's Ahsoka's origin story, in a nutshell: She's Anakin's Padawan. He used to call her "snips," and she used to call him "Sky-guy." (I know. I know.) Anyway, by Clone Wars Season 7 she has been kicked out of the Jedi Order and is operating on her own. This plays a huge part of her eventual return on Rebels, and might connect to her brief voice cameo in Rise of Skywalker. Ahsoka isn't in Season 6 of Clone Wars at all (other than flashbacks) because she was kicked out of the Jedi Order.

You need to know why Ahsoka left the Jedi Order to truly understand her character in Season 7, and these three episodes — "The Jedi Who Knew Too Much," "To Catch a Jedi," and "The Wrong Jedi" — explain that journey. After these episodes, we assumed that Anakin and Obi-Wan never saw Ahsoka again, But Season 7 is going to change that, making this three-parter of Ahoska's big fall-out a must. Plus, important canon stuff aside, these episodes are straight-up awesome.

The Clone Wars Season 7 is scrunched between the events of Episode III and the start of the show Rebels, so it's just as important to know where Ahsoka is going. We also know a younger Kanan Jaruss will appear in Clone Wars Season 7, still going by his original name, Caleb Dum.

This episode of Rebels centers on adult Kanan and an older, wiser Ahsoka. If you're trying to connect all the dots, here's a pivotal moment where all these characters meet again under dramatically different circumstances.

Watch this episode on Disney+ here.

Star Wars: The Clone Wars will hit Disney+ on February 21.