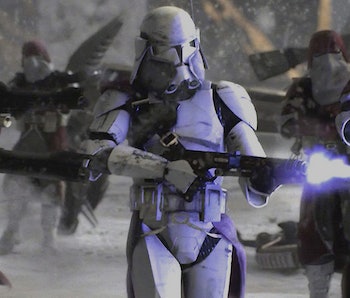 When Disney+ announced The Clone Wars would return for a seventh season covering the events of Revenge of the Sith, it was apparent what the climax would be: Order 66, the brutal heel turn by Sheev Palpatine ordering all clones to turn against the Jedi. However, it was unclear just how the show would portray this incident, given that Ahsoka Tano is the point-of-view character for most events in Clone Wars, and we know she survives. Now, one recent Clone Wars Easter egg may hold the key to what we can expect from the series.

Eagle-eyed Reddit user LordofHighgarden noticed the appearance of Bacara, a clone commander who has only previously appeared in Revenge of the Sith. Bacara was the commander of the 21st Nova Corps, also known as the Galactic Marines. The Marines served under Ki-Adi Mundi, a Jedi Master and Jedi General most recognizable by his tall Cerean head.

Mundi and Bacara were in battle on Mygeeto when Order 66 went into effect. Bacara turned on his own General and commanded the clones to open fire, killing Ki-Adi Mundi.

Bacara's inclusion in Clone Wars may seem innocuous, but there's a far greater implication. While speculation is swirling over what the Disney+ version of Order 66 will look like, it's likely we'll see a variety of angles on the galaxy-altering protocol. The brief montage of warriors being cut down in Revenge of the Sith didn't adequately convey what a devastating loss this was for the Jedi. Now, Season 7 has the chance to take another swing at this watershed tragedy.

That said, don't expect an out-and-out killing spree – Clone Wars is a children's show, after all. However, we can expect to see Ahsoka escape and cope with the staggering number of Jedi losses. Including Bacara and Ki-Adi Mundi would further underscore that sense of devastation.

Clone Wars has introduced a whole lot of characters who we know will not survive Order 66, like Plo Koon and Shaak Ti. Plo Koon gets shot by his own clones, while Shaak Ti will be slain by the newly turned Darth Vader at the Jedi Temple.

The best solution, probably, is a montage. The Force binds Ahsoka to all these Jedi, and she'll feel a disturbance when Order 66 kicks in. Sensing the loss of these Jedi, especially Plo Koon, who discovered her as a child, would spur her to start her escape, an escape we know will lead to Rebels, and eventually, The Mandalorian.