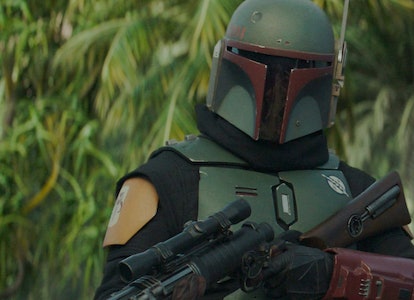 But within the non-canon Legends universe, rancors have a more illustrious history, one that aligns with a recent set leak from The Book of Boba Fett.

In the upcoming Disney+ spinoff series, set to arrive in December, Boba will attempt to tame a rancor on the streets of Tatooine, according to StarWarsNewsNet. The Book of Boba Fett is set years after the original trilogy, meaning the rancor included can’t be any of those we’ve seen so far on screen.

Legends, however, offers plenty of rancors for The Book of Boba Fett to choose from.

Rancors are native to the planet Dathomir; since the alleged scene seems to take place elsewhere in the galaxy far, far away, it’s unlikely that Boba will encounter wild rancors. Like Pateesa, a gift from Bib Fortuna, could this mystery rancor also belong to Jabba?

If so, all signs point to The Book of Boba Fett introducing Malakili, Jabba’s animal trainer (who has a history with the circus). Could Boba become part of Jabba’s new posse in the series, training a selection of terrifying animals alongside Malakili for use in bounty hunting? Malakili was briefly seen in Return of the Jedi, but he was fleshed out in “A Boy and His Monster: The Rancor Keeper’s Tale,” a Legends short story.

If the rancor isn’t Jabba’s, one other possibility is that it’s the pet of another crime lord, one who does not employ an experienced animal trainer. Theoretically, such a rancor could easily get loose and require Boba to wrangle it. Many other Hutts in Legends lore had rancors as pets; Borvo the Hutt is one example.

While canon had Borvo running his underground crime empire in Naboo, there’s no telling how the new series could change this character to make him a foil for Boba.

Yet another possibility is that the rancor could be owned by the Nightsisters, who have a long history in Legends of domesticating rancors and using them in combat. Could Boba be facing off against the Nightsisters?

Regardless of whether or not this rumor turns out to be, the prospect of live-action rancor action is incredibly exciting. Hopefully, Boba will be able to wrangle such a creature. Maybe he’ll even feed his enemies to it, in a rather poetic reversal.

The Book of Boba Fett premieres on December 29 on Disney Plus.