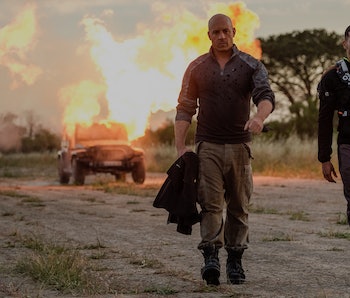 Bloodshot, the new superhero movie starring Vin Diesel, is the first film adaptation of a character from Valiant Comics. Since its founding in 1989, the cult comic publisher has given Marvel and DC a run for their money. The pending success and popularity of Bloodshot could kick off a new Valiant Cinematic Universe. However, producer Dinesh Shamdasani told Inverse there's no concrete plans for a VCU.

At least, not yet.

"When we were at Valiant, there was a philosophy that the best idea wins," Shamdasani told Inverse at New York Comic Con. "The best story, the best business decision to support creative. For us, that meant the shared universe."

Before producing Bloodshot, Shamdasani and business partner Jason Kothari were hardcore Valiant fans who bought their favorite publisher after the bankruptcy of its parent company, Acclaim. Valiant returned with a rebooted universe in 2012, and titles like Bloodshot, X-O Manowar, Ninjak, Archer and Armstrong, and Faith became hits.

Like Marvel and DC, Valiant wields its own shared universe of characters. What's more, "Valiant is the only universe built from the ground up to be a shared universe," Shamdasani says.

But that was then. This is 2020, and "the philosophy is now different" Shamdasani says, as audiences know all too well how shared universes work. "If we're going to carve out a legacy in film and fight the largest brand film has ever seen, then we need to take every opportunity to be unique."

Whether Bloodshot becomes the biggest superhero movie of 2020 or not, "The shared universe is not a key factor."

Prior to the massive 2014 Sony Pictures hack, Sony entertained a seven-picture deal with Valiant. "They were all in on Valiant." But the publisher passed.

"We didn't want to do that," Shamdasani says. "We wanted to spread it around so we could get competitive. So we said no. I don't think anyone's ever said no for a studio."

In return, Valiant pitched a more modest slate centered on Bloodshot and the superhero ensemble Harbinger, culminating in a movie based on the Harbinger story arc "Harbinger Wars."

"Dream fantasy plan, just internal," the producer says. Sony was on board until the hack revealed the plans. Years later, Harbinger returned to original rightsholders Paramount Pictures, who have restarted development on a separate Harbinger movie.

Had things gone the way they were supposed to, Shamdasani says Diesel wanted to include a key character from the Valiant Universe — the mastermind Toyo Harada — in Bloodshot. A whole post-credits scene was written in an earlier version of the script that would have involved Ken Watanabe in a cameo as Toyo Harada, telepathically controlling a huge dire wolf that talks to Diesel's Bloodshot (now geared up with katana swords and guns, like in the comics).

Both the scene and Harada were omitted when forces outside Diesel and Shamdasani's control led Bloodshot to be a stand-alone movie.

"No one wanted Harada more than Vin," Shamdasani says. "We had a scene we wrote, no joke, that Vin loved so much that at four o'clock on a Saturday he called me up to his penthouse and performed this scene, including an imitation of a wolf. He was that in love with it."

"We always knew we wanted to [make movies], it would be a dream come true if we can get these characters on the big screen," Gorinson tells Inverse. "Me and Dinesh always saw that as our larger goal at Valiant. The way to get these characters in front of the biggest audience possible. Show the world what we had known was great about them all along. Now we’re there. It’s weird and stunning to see a dream like that come true."

No one behind Bloodshot is ruling out a new "Valiant Cinematic Universe" just yet. "There's an ebb and flow," Shamdasani tells Inverse in a more recent call. While Bloodshot is under Sony and Harbinger is at Paramount, a shared universe is a bridge the producers will cross when they get there.

"[Bloodshot] remains a solo film that if we’re lucky enough in success, certainly there will be sequels," Shamdasani says. "I don’t know if it’s going to spring out into its own universe. It’s not built that way. But neither was Iron Man, and we tried to mimic that model."

Bloodshot is in theaters now.