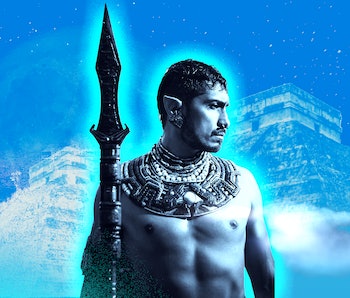 When Namor rises to the surface of the Marvel Cinematic Universe, his home world of Atlantis won’t look like the picture you probably have in your head. In fact, it’s not Atlantis at all. According to director Ryan Coogler, everything about Namor’s new look was meant to give audiences a fresh perspective.

In Black Panther: Wakanda Forever, the sequel to Marvel’s monumental 2018 hit Black Panther, Wakanda faces a crisis when the underwater kingdom of Talokan attacks to protect its own secrets from leaking to the surface.

Talokan is ruled by Namor the Sub-mariner, portrayed by Tenoch Huerta. One of Marvel’s oldest characters, in the comics Namor was the protector of Atlantis, the fabled sunken city from Greek mythology. But in the MCU, Namor and Atlantis are reimagined to reflect a Mesoamerican identity. Talokans speak Yucatec Maya, and everything from their architecture to their clothes echoes indigenous South American civilizations.

The “Atlantis” of Wakanda Forever is a far cry from the sunken city seen in films like The Little Mermaid, Aquaman, and Stargate. Director Ryan Coogler, who co-wrote with Joe Robert Cole, tells Inverse that their movie’s interpretation of Atlantis was meant to give audiences a new experience.

“There have been a lot of representations and creative depictions of Atlantis based off of Plato’s Atlantis, the Greco-Roman concept of a city sunk into the sea. That idea exists in a lot of different ways,” Coogler tells Inverse. “We wanted our film to exist alongside those movies and be different. It was really out of respect to the audience, not wanting to give them something similar to other things that have come before it.”

Coogler adds that the general concept of a city lost to the waves wasn’t exclusive to Greek and Roman mythology. This freedom allowed the MCU to plant Talokan wherever it wanted. For Wakanda Forever, Coogler saw an opportunity to bring Mesoamerican culture into the Marvel Universe in the same way Black Panther imagined an amalgamized Africa to embody Wakanda.

“If you Google lost cities or lost continents, this idea of things sinking into the ocean and disappearing, or even people that live in the water, you’ll see that idea represented in myths all over the planet,” Coogler says. “So that encouraged us to try to find a way to do it differently.”

Associations between the fictitious story of Atlantis and the real civilizations of Mesoamerica are often steeped in racist narratives. For centuries, pseudo-historians have claimed that the technological feats of the Aztecs, Mayans, and their contemporaries were thanks to fantastical intervention by Atlanteans. Such ideas are not only scientifically bankrupt, but divorce indigenous South Americans from their accomplishments.

In Black Panther: Wakanda Forever, Talokan and its people stand on their own. How they’ll factor in the future of the MCU, including the coming fight with Kang in Avengers: The Kang Dynasty, remains to be seen. But while Talokan isn’t Atlantis anymore, its protector is still Namor, the fearsome Sub-mariner.

“In the Black Panther film we released in 2018, we did the work of making sure the choices we made were culturally specific,” Coogler says. “We did deep, deep dives and employed academics and consultants to make sure we were getting it right, and representing them with intention and respect. We want to do the same thing when bringing another culture to life. We settled on classic and post-classic Mayan civilizations around the Yucatan region as a base for our story. From there, it started to really take off.”

Black Panther: Wakanda Forever will open in theaters on November 11.