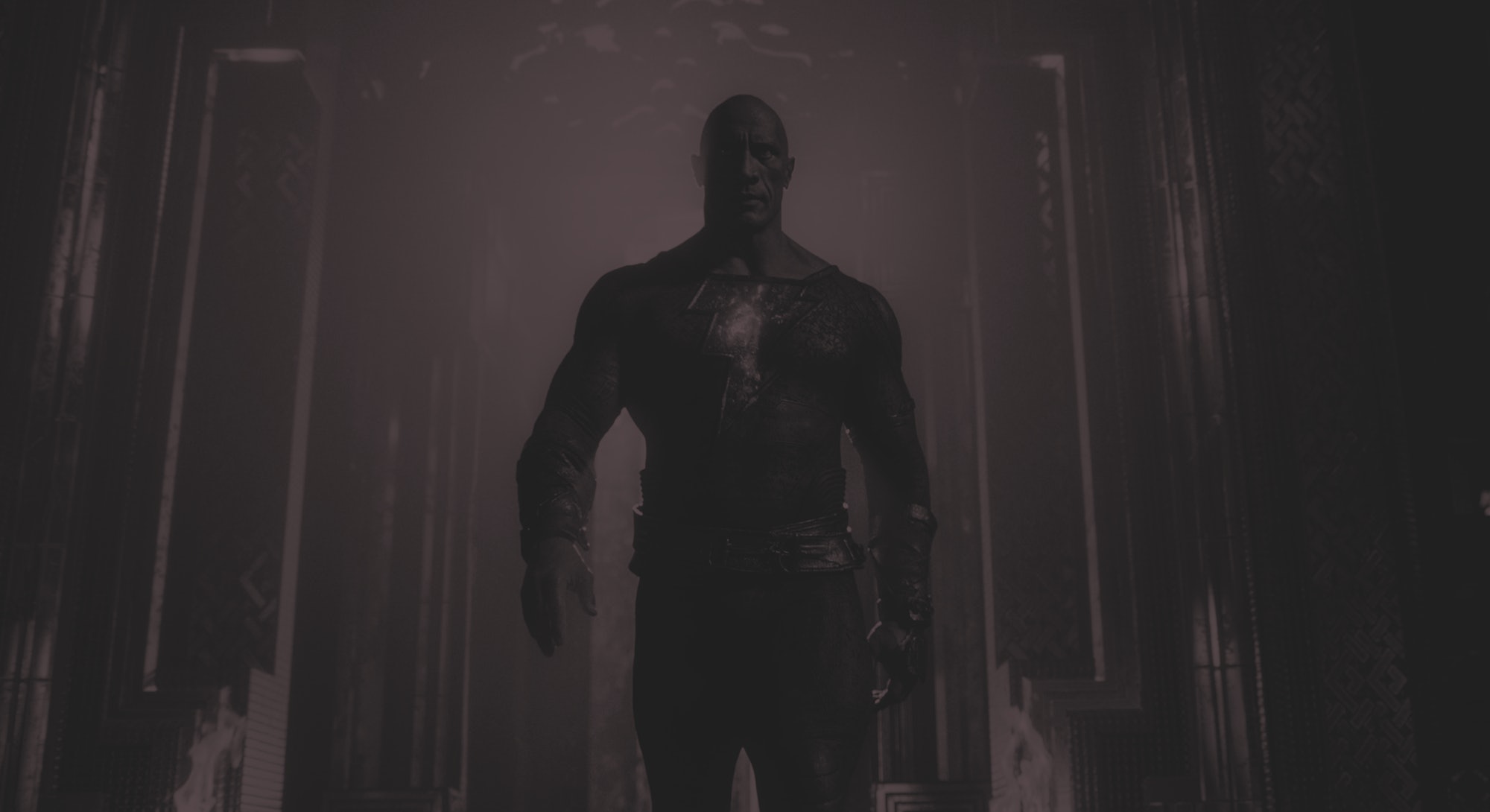 To bring Black Adam to the big screen, it wasn’t enough to hoist Dwayne Johnson on wires.

“There’s a look when actors are on wires. You can kind of just tell,” producer Hiram Garcia tells Inverse.

Dwayne Johnson, formerly “The Rock,” enters the DC cinematic franchise in Black Adam, from director Jaume Collet-Serra. Johnson plays Teth-Adam, an enslaved man from an ancient civilization who awakens in the 21st century with godlike powers.

Warning: Spoilers for Black Adam ahead.

Black Adam is Johnson’s entry into the DC Universe, an expanding canon that includes icons like Superman, Batman, Wonder Woman, and Black Adam’s true comics rival, Shazam. Since the first reveal of Black Adam in 2020, Johnson has threatened to alter the “hierarchy of power.”

Development of Black Adam began even further back, since at least 2007. Movie technology, and Johnson’s stardom, have only evolved since. So when work on Black Adam truly began, the filmmakers felt it was inefficient to strap strings on Johnson to make him hover off the ground, as the godlike Black Adam usually does in his epic monologuing.

Garcia, Johnson’s longtime business partner and producer on Black Adam, tells Inverse that some cutting-edge movie magic separates Black Adam from other superheroes of the past.

“We used technology that’s never been done before,” Garcia says, describing “giant, programmable robotic arms” that created “smooth and buttery” movement and “devices that would allow [Johnson] to be off the ground as he was moving through set.”

Garcia, of course, didn’t invent this technology. (He names Oscar-winner J.D. Schwalm and VFX supervisor Bill Westenhofer as the ones who made it happen.) But as one of the producers on Black Adam, Garcia tells Inverse such steps were necessary for Dwayne Johnson’s monumental debut in the DC Universe. “We did things that had never been done before that would help set Black Adam apart from other movies you've seen,” he says. “It was important for us to make sure that when he flew, it felt awesome.”

In an interview with Inverse, Garcia describes the long journey it took for Black Adam to open in theaters, including efforts to arrange that surprise mid-credits cameo and why Dwayne Johnson doesn’t rock Teth-Adam’s signature widow’s peak in the movie.

From the outside, a DC superhero movie with Dwayne Johnson sounds like an immediate green light. What took Black Adam so long to get here?

It took a couple of things. First, it took getting the story right. That was key. You’re introducing Black Adam to the world. Even though he’s a big comic book character, he’s not your typical hero. You’re gonna have to do things different. You’re gonna have to do this movie with an aggression and edge that honors the character. Black Adam is known for how he conducts himself. He’s violent. He’s hard to handle. We wanted to make sure we honored those things.

It took iterations. At one point there was going to be a Shazam and Black Adam movie. The characters are both too big they needed their own space, so fans could just invest in them without shortchanging them. It really took off once we separated Black Adam from Shazam! Shazam!’s tone was family-friendly. We wanted Black Adam to have a darker, more edgy tone.

Dwayne Johnson’s Black Adam was originally meant to serve as the villain of 2019’s Shazam! (above), but producer Hiram Garcia says the character received his own film over the course of development.Warner Bros. Pictures
On the basis of Black Adam’s darker tone and epic story, Dwayne Johnson now stars in his own film, Black Adam. Producer Hiram Garcia teases a confrontation with Shazam in the future.Warner Bros. Pictures

What about Black Adam do you think resonated with Dwayne Johnson? What interested him about Teth-Adam that other DC characters did not?

He also wanted to kick the crap out of a lot of guys. He loves to be a disruptive force. There are a lot of great powerful heroes in the DC Universe. We’ve seen anti-heroes before. But we’ve never seen an anti-hero like Black Adam on the big screen, at his power scale. This is a character that, when they arrive, it’s gonna send ripples. That kind of disruption is appealing to us.

We looked at all options, from the ears to the widow’s peak. But a lot of times, that stuff just looks funny on screen. It ends up being distracting. There have been so many iterations of Black Adam. We wanted to go with the human Black Adam, as opposed to a version that came from another planet and had pointy ears. We liked the later iterations when he [was] a human on this planet. That eliminated the ears. I think the widow’s peak was just going to look silly. We didn’t want audiences distracted as DJ became this character. I think he does a great job of disappearing and really just seeing Black Adam on screen.

Black Adam made his comics debut as the nemesis to Shazam (then Captain Marvel) in 1945, in The Marvel Family #1. Above: Black Adam on the cover of Shazam! The New Beginning #3, published June 1987.DC Comics
Dwayne Johnson, in Black Adam.Warner Bros. Pictures

Dwayne Johnson has been picking a fight with Superman, but fans know Black Adam has always been Shazam’s rival. Does Black Adam have sights on fighting Billy Batson, too?

Black Adam has his sights on the entire DC Universe. We’ve always envisioned that Black Adam should cross paths with all the heroes. That's what we'd love to do. Obviously we have a great relationship with the actor that played Superman, so there was always something fun there. It was always in response to what fans were calling for. They just knew: Superman is the strongest in the DC Universe. And they knew if DJ was going to play Black Adam, that [he] was going to be extremely powerful as well. Fans love the wish fulfillment of these two meeting.

But we've always loved the idea of Black Adam facing all of them. That includes Shazam, Batman, Wonder Woman, Aquaman, you name it. We want a character to cross paths with all these great heroes, and if we're able to do what we want to do, we have ambitious storytelling we would love to figure out, bringing all those dreams and wishes fans have to fruition.

Spoilers here, but how was Dwayne Johnson instrumental in bringing Henry Cavill back as Superman in the mid-credits scene?

To get Henry to continue the story of Superman was a privilege. I’m the biggest Superman fan. The fact we were able to pull it off, we’re proud. It was a highlight of our careers.

It was a collective team effort. Dany [Dany Garcia, Hiram’s sister and Henry Cavill’s representative], Dwayne, and I have spoken about this for years and worked on it and from all angles. Dany has been working diligently on this for the last six years through her relationship with Henry. Dwayne and I have been working on it on the ground side with a relentless approach. It’s been a collective effort to bring this dream come true.

It wasn’t easy. There’s been regimes that have passed through DC and Warner Bros. What I appreciate is that the new regime, and our partner at New Line, Richard Brenner who’s always had our back, understood and supported our vision. That wasn’t the case before. It was a battle to make it happen. We would not relent. Many people tried to get us to stop, but we weren’t going to do it. We were told “no” an unbelievable amount. We’re crazy and we don’t stop, and we got the answer we wanted.

We took it right to the final moment. I’m talking, we got authorization as late as you could in a movie and finish the effects. The VFX partners were like, “We don’t know if we’re gonna pull it off.” We’re like, “We got him. You got to.” They did and it came out great. We’re just so proud because we knew what the fans wanted. It’s what we wanted, as fans.

As a movie, Black Adam touches on heavy themes like Western imperialism, slavery, and occupations. How would you describe Black Adam as a political film?

I wouldn't call it political. We’re in entertainment, we want to entertain. But we do love Black Adam being able to do things other heroes can’t. That’s fun. Black Adam puts audiences in a situation where you can’t really argue with what Black Adam’s doing. You can say it’s violent, but he’s not wrong. The DC heroes try to live an ideology of “Heroes don’t kill.” But it isn’t necessarily right Batman continues to capture the Joker. He will eventually break out and kill more innocent lives. Black Adam’s solution is, “I won’t let them live, and I’ll protect countless lives.”

Black Adam plays in the gray. All his motivations are rooted in family and his people. If you mess with anything he cares about, he is going to act swiftly and violently. He has his sense of justice where he’s judge, jury, and executioner, and that’s an interesting dilemma for heroes to deal with.

You have another major star in the film: Pierce Brosnan, who plays Doctor Fate. What do you think compelled an actor like Brosnan to a big superhero movie like Black Adam?

I think Pierce could tell what we had built. I never like to speak for a legend, but my guess is, he could feel the passion we poured into this project. Doctor Fate in our movie is the elder statesman. His insight into the future gives him a perspective that is so elegant, and that was appealing to him. He’s joked so many of his friends found themselves in amazing movies, Lord of the Rings, Harry Potter, or Marvel. He had been looking for one that was going to be his. When we were able to get Pierce, talk about a dream come true. We’re going to come back to him a lot more and try to make more films with him.

Tell me you played GoldenEye on N64 with Pierce Brosnan.

One of the all-time great multiplayer games. It didn’t happen, but the fact you bring it up, we really should have done it.

Black Adam has a lot of explicit nods to Clint Eastwood movies. What are the parallels meant to symbolize for Dwayne Johnson’s superhero debut?

That was Jaume. He understood the vision we were going for. He felt Black Adam was a “Dirty Harry” within the universe, and he felt it was a Western. One of DJ’s favorite actors is Clint Eastwood, so that was Jaume’s brilliance of creating that homage as Black Adam is getting his footing and what this world is like after 5,000 years. That Dirty Harry vibe really started to make Black Adam pop for us.

Regarding the future of the JSA, who else from the DC Universe are you looking to recruit in Black Adam sequels?

As filmmakers, we’re superstitious. We never like to get too far ahead of ourselves. It starts with the fans. If fans give us permission, we have so many stories we want to tell within the DC Universe. I don’t want to run names because I know that gets tricky, but there are characters we’re excited to bring into the JSA, as well as explore the JSA’s complicated past and how they would be functioning moving forward. We have big plans for that side.

You can’t run names, but maybe I can. Alan Scott? Jay Garrick? Stargirl?

Every single one of them is on the radar. For me, Spectre is right in my sights. Like, “How do I get him in there?” But we’re on it. We want to make all the fans excited, because at our heart, we’re fans. We just want to see this stuff on the big screen.