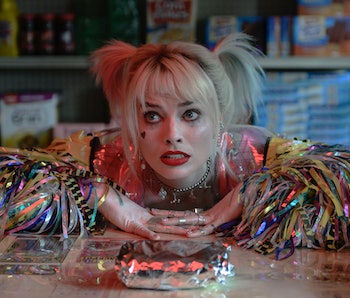 As we lightly spoiled to you earlier this week, there is something special after the credits of Birds of Prey (and the Emancipation of One Harley Quinn). It's not a scene, to be clear. There isn't a scripted moment between two characters talking to each other. But, it's still something, especially if you're looking forward to what's next from DC Films.

Warning: Spoilers for Birds of Prey ahead.

After the credits roll, there's a little something extra. With the Warner Bros. title still playing, Harley talks to the audience via voice-over. "Oh, you're still here?" she says. (Of course we're still here, Harley, it's a superhero movie.) As a "treat" for staying through the credits, Harley begins talking about Batman, saying "Did you know that Batman—" before she's cut off.

Like we said: It's not a scene. It's just something fun and extra, like the "post-credits" breathing of Michael Myers in 2018's Halloween. It's also delightfully trollish, keeping in spirit with Birds of Prey as a madcap movie that's slightly self-aware of itself.

Why Harley's talking about Batman

Besides the fact that Birds of Prey is a movie set in the same DC Universe as movies like Batman v Superman, Suicide Squad, and Justice League, Harley is toying with the audience because the next big Batman reboot is coming in 2021. Next summer, director Matt Reeves will reintroduce the Dark Knight played by Robert Pattinson, in a movie that as far as anyone knows is still called The Batman.

While the movie is expected to share continuity with the DC cinematic universe, the specifics are unclear. Especially since the Batman in the "DCEU" is still the older, grizzled one portrayed by Ben Affleck, who left the role last year. So there's a lot of intrigue in the air over Batman, because no one knows what the next era will look like. Harley seems to know something, but the powers that be are keeping her from telling us more.

Birds of Prey is in theaters Friday.