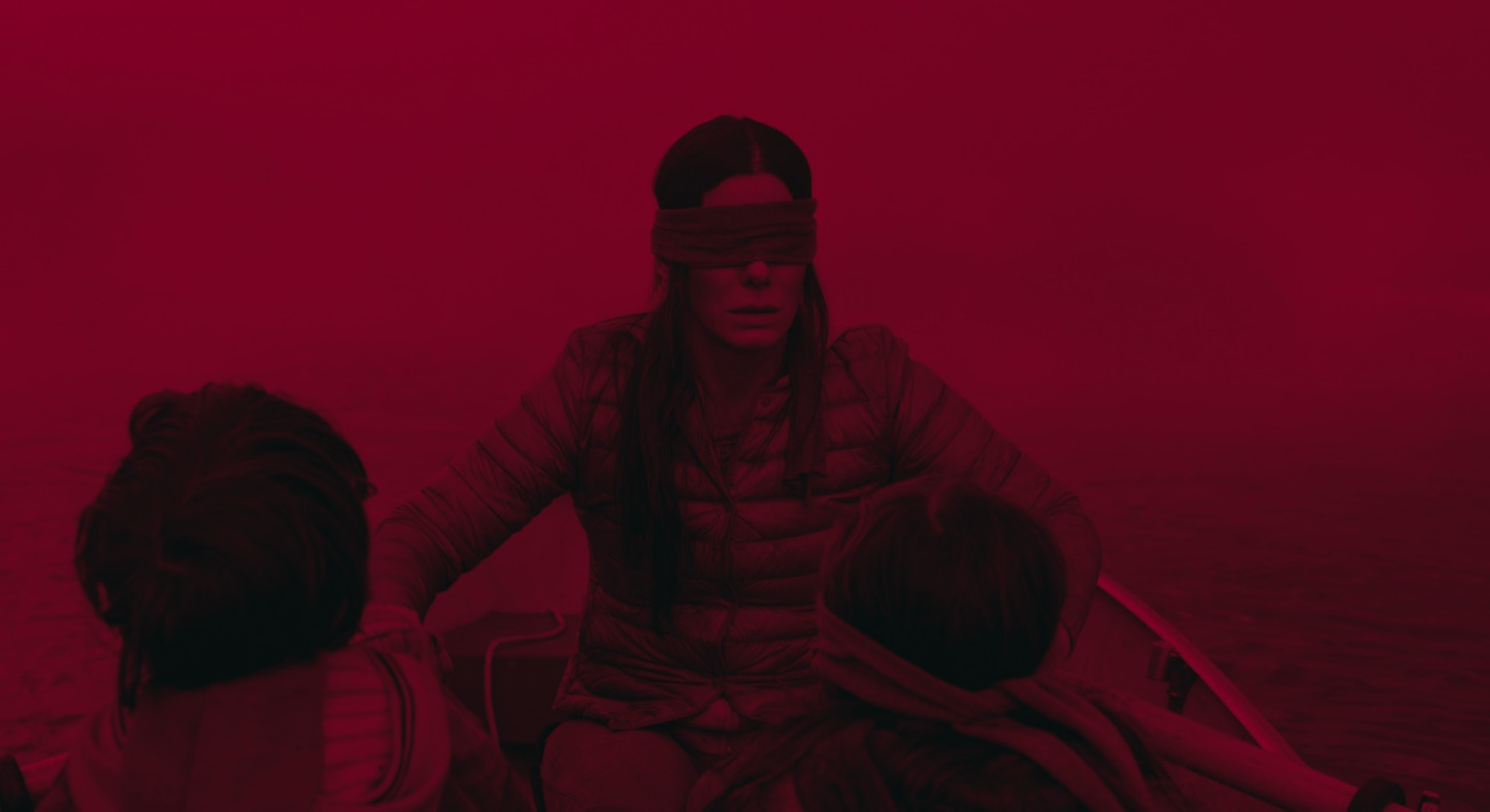 The interview is over, but Bird Box author Josh Malerman really wants to show me something spooky in his house.

In a horror story like the one that made him a famous writer, this might be a huge red flag, but I'm safe on the other side of a Zoom call and Malerman is about as far from a scary movie villain as you could imagine. An aging hipster who went from living with his friends in Williamsburg in the early 2000s and touring as a rock band (he wrote the Shameless theme song at a house party in Georgia while on tour) to publishing the story that inspired Netflix's most popular movie of all time, Malerman comes across as a genuinely nice dude who also happens to be obsessed with horror.

"Look at this dude, this is the original," he tells me, holding up a copy of The Shining soundtrack, part of a collection of horror movie vinyl covering one wall of his cozy home office. He's also got a coffin-shaped bookcase made by his brother and packed full of old paperbacks, and a pair of replica zombie heads from the movie Creepshow. Even his closet is full of scary masks.

There was a point to this interview, of course. The long-awaited sequel to Bird Box (the book, not the movie) is coming out on July 21. Titled Malorie after the character Sandra Bullock brought to life on Netflix screens around the world, the new novel picks up where the original book/movie left off, meaning fans of the film should be able to jump right into the sequel novel.

"Malorie opens at the school for the blind, which is where the movie ends," Malerman says. "Then it jumps a few years later, and it really takes off 10 years after that."

“I can say that it is in development.” — Josh Malerman on a sequel to the movie Bird Box

He adds that a sequel movie is already in the works, though for now, the details surrounding it are as secret as the unseen monsters that haunt his story.

"I can't say much, but I can say that it is in development," Malerman says. "Sometimes it’s weird, all this secrecy, but I'm game."

For the uninitiated, Bird Box takes place in a post-apocalypse caused by a creature we never see. Looking at the monster causes anyone to go insane and either ally with it or kill themselves. As a result, the survivors are forced to wear blindfolds or cover their eyes whenever they go outside, which makes finding sanctuary particularly difficult.

Released on Netflix over the 2018 winter holidays with Sandra Bullock in the lead role and a cast that included John Malkovich, Sarah Paulson, Lil Rel Howery, and the rapper Machine Gun Kelly, Bird Box was a monster hit. Almost 26 million people watched it in its first week, according to Netflix. And in a recent Inverse poll of over 1,200 readers, it was also the most popular Netflix sci-fi movie by a wide margin.

That success (and seeing Bullock bring his character to life) inspired Malerman to write Malorie. However, he says the first movie didn't change how he approached writing the sequel.

"It took about the same amount of time. I was also aware that there was a possibility that Sandra Bullock wouldn't be playing Malorie," Malerman says. "When you first start writing novels, especially now, how do you not see them cinematically? We grew up on movies. So with Bird Box, I always saw it cinematically. It almost reads like stage directions. It felt the same writing Malorie, but I didn't have Sandra Bullock in mind when I wrote the first one."

“I didn’t have Sandra Bullock in mind when I wrote the first one.”

In the middle of a global pandemic, when video conferencing software like Zoom isn't just a fun way to interview someone across the country but an everyday necessity for millions of people, it's easy to draw parallels between Bird Box and our own scary reality. In one world you cover your eyes outside or go insane, in another you cover your mouth and noise in public or risk getting sick (or going viral for throwing a temper tantrum at Walmart).

But Malerman is reluctant to compare the two, despite some obvious similarities.

"You look out your window, you go mad," he says. "I can understand the links, but I'm hesitant to draw a parallel between a good scare and a bad scare."

He continues, revealing that he sometimes forgets where Bird Box ends and the real world begins.

"But I understand that Bird Box would fit into this sort of lockdown life that we're leading. I even had an odd moment where I was getting ready to leave the house and I was like, Okay, I need my mask, and my gloves, and you can’t look outside. So even like I understand it. It fits in with today's world."

Malorie will be available wherever books are sold on July 21.