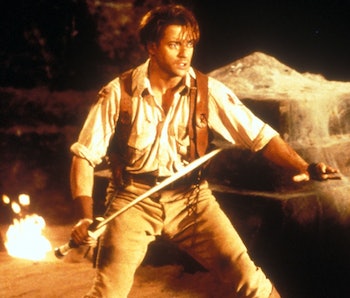 Action-adventure movies are some of the most entertaining stories that Hollywood has to tell, but that doesn’t mean it’s easy to get them right. Indeed, for every Raiders of the Lost Ark or Curse of the Black Pearl, Hollywood produces a Jungle Cruise: a soulless, formulaic film that fizzles more than it sparks.

In the decades since Steven Spielberg, George Lucas, and Lawrence Kasdan came together to perfect the blockbuster with Raiders, the chasm between great Hollywood adventures and lackluster ones has only widened. But that doesn’t mean there haven’t been any genuinely great or memorable adventures released since that film’s debut.

In fact, 1999 saw Hollywood make one of its best post-Raiders adventure flicks in the form of The Mummy. One of the most fun and lighthearted American studio blockbusters of the past thirty years, the film is only elevated by star-making turns by its leads.

Never seen it? No problem. The Mummy is available to stream now on HBO Max.

While 1999’s The Mummy is considered a remake of the Boris Karloff-led 1932 classic film of the same name, it feels more like a reimagining of the property than anything else.

Set in the mid-1920s, The Mummy follows an ambitious librarian named Evelyn Carnahan (Rachel Weisz) and her brother Jonathan (John Hannah) as they team up with Rick O'Connell (Brendan Fraser), a rugged American adventurer, in search of Hamunaptra, the legendary Egyptian city of the dead. Along the way, they run into a band of greedy Americans interested in stealing the ancient city’s rumored treasures, as well as a group of Egyptian warriors tasked with protecting the city’s secrets and hidden dangers.

Of course, Rick, Jonathan, and Evelyn’s quest takes a dark, unexpected turn when Evelyn reads a passage from the Book of the Dead. In doing so, she accidentally awakens the film’s titular monster (played here by Arnold Vosloo), freeing him to unleash his wrath upon the world.

What follows is an epic, silly, and twisty action-adventure — one that, thanks to the inclusion of some flesh-eating beetles, contains a number of genuinely terrifying moments of body horror. And, like all great Hollywood adventure movies, The Mummy shines because of the talents of its stars.

In this case, those stars happen to be Brendan Fraser and Rachel Weisz, two actors who give performances so exuberant, magnetic, and frankly hot that people are still talking about them to this day.

For her part, Weisz soars as the ambitious, overly inquisitive Evelyn, while Fraser delights as the capable but sarcastic-as-hell Rick. Apart, the two stars are as reliably good as they’ve been throughout their careers; but together, they energize The Mummy with a playful, romantic spark that films like, say, Jungle Cruise desperately wish they had.

Fraser and Weisz elevate The Mummy, leaning into its silliness without ever appearing to make fun of it. They know — as does writer-director Stephen Sommers — that movies like these only succeed by charming viewers, ensuring they forget about trifling matters such as plot and logic (both of which The Mummy, thankfully, cares very little about). Weisz and Fraser reflect this in their performances, which are big, loud, and delightfully unselfconscious.

That there have been very few action-adventure movies released over the past 30 years as good as The Mummy is, honestly, a bit depressing. But the relative dearth of robust entertainment in this area of Hollywood is also a powerful testament to the enduring glory of The Mummy.

The Mummy is available to stream now on HBO Max.