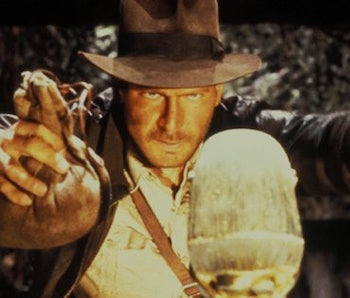 June 12 marked the 35th anniversary of director Steven Spielberg’s classic film, Raiders of the Lost Ark, which kicked off the Indiana Jones franchise — and left an indelible legacy in Hollywood.

The 1981 film, conceived by Spielberg’s compatriot George Lucas, starred Harrison Ford as a swashbuckling archeologist out to fight the Nazis and find the Ark of the Covenant. It was a perfect fusion of the movie serials from the 1930s and 1940s that the pair grew up watching, along with a bit of James Bond flair thrown in for good measure. The movie was a massive hit, and redefined the blockbuster genre trail first blazed by Spielberg with 1975’s Jaws. And along with its own three sequels, it also spawned a whole slew of imitations and impersonations that still impacts pop culture today.

After Raiders of the Lost Ark was released, action cinema was never the same, but so many other genres were influenced by it as well. Here’s a look at a few examples of this classic’s lasting impact.

Tthe final shot of Raiders of the Lost Ark basically provided the entire basis for Chris Carter’s groundbreaking sci-fi series (which had a much-maligned and very brief revival). Carter even said as much talking to TVInsider earlier this year, saying that Indiana Jones is “the reason I’m doing what I’m doing.”

The single image of a man slowly wheeling the Ark of the Covenant into a vast, nameless government warehouse gave rise to the idea of the conspiratorial show and all the the mysteries that David Duchovny’s Fox Mulder and Gillian Anderson’s Dana Scully investigated over the years. Though The X-Files isn’t as adventurous or purposefully pulpy as Spielberg’s classic, the show represents the more academic and procedural side of the movie’s best moments.

A celebrated and intelligent college professor running around the world looking for priceless artifacts? The concept was basically ripped off from Indiana Jones wholesale by author Dan Brown, in his popular series of Robert Landon books.

Like Indy, Brown’s Harvard professor protagonist puts himself on the line of fire in order to uncover centuries old mysteries, and they even both had a hand in searching for the Holy Grail at one time or another. While the Langdon character (played by a mullet-toting Tom Hanks in director Ron Howard’s movie adaptations) is more apt to think his way out of a situation with pseudo-science mumbo jumbo in things like The Da Vinci Code or Angels & Demons, Indy would just punch or shoot. Brown owes his most popular creation to Spielberg’s own creation because it plays on fundamental notions of adventure but the two go in very different directions.

It makes sense that a movie as rousing as Raiders of the Lost Ark would get video game-ified, but we’re not talking about the original Atari 2600 game. Tomb Raider came along and put a female spin on the adventuring archeologist trope made famous by Raiders, spawning its own mini video game empire in the process, which yielded two big screen adaptations starring Angelina Jolie in the role of the globe-trotting lead character Lara Croft. A reboot, starring Academy Award-winning actress Alicia VIkander, is currently in the works. But perhaps no other video game series has cribbed from Raiders of the Lost Ark quite like Uncharted, which is so similar that the makers of the game might as well give Spielberg some money for every game they sell. It isn’t egregious to the point of straight up plagiarism, but the Uncharted series takes it cues from the kind of romanticized Saturday morning serial adventures that inspired Raiders, and even plays off the same idea as Tomb Raider. Still, the similarities are uncanny.

Spielberg is nothing if not a genius, but he’s definitely been mining his own filmography for new ideas since he threw a humorous nod to Jaws in his infamous box office World War II comedy bomb 1941. Besides picking apart a panoply of opposing perspectives about war in movies like Saving Private Ryan, Schindler’s List, Munich, War Horse, and Bridge of Spies, he’s also returned to explore self-referential but differing images of aliens from Close Encounters, to E.T., to War of the Worlds. But the most specific palimpsest for Spielberg is Raiders, which he delved back into for inspiration in subsequent works like The Goonies (which he produced in 1985) or 2011’s animated The Adventures of Tintin, which is like a more staid, kid-centric version of his Indiana Jones story despite being adapted from Belgian cartoonist Hergé’s source material. You could also argue he tried to return to the scrappy roots of Raiders in the decades-delayed 2008 sequel Indiana Jones and the Kingdom of the Crystal Skull to relatively middling results.

Spielberg and George Lucas created a phenomenon by repackaging the stories from their youth to make into big blockbusters, and perhaps nothing else embodies that tendency more in contemporary Hollywood than the mighty Marvel Cinematic Universe. By taking what was for years a substandard form of entertainment in comic books and turning it into top level spectacle, the MCU continues what Spielberg began in Raiders of the Lost Ark in an overly grandiose way.

The MCU even has its own nod to Raiders with the old-fashioned Captain America: The First Avenger, directed by Spielberg disciple Joe Johnston. In 2011 he told the LA Times that the Raiders parallels weren’t a coincidence:

“When you sit down to watch [Captain America], it’s certainly not Raiders of the Lost Ark, which is a very different kind of film in the final analysis. But sometimes when we had questions and we were stuck we would say, ‘What would Indiana Jones do? What would be the answer to this in Raiders of the Lost Ark?’ I’ve always loved Raiders and the great achievement of it was the tone and the fresh feeling of the movie. It was period but didn’t feel like it was made in the period. It felt like a contemporary film about this period in the past, and that is the goal we have with Captain America.”