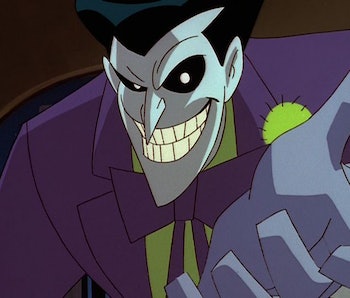 The Joker is Batman’s greatest foe, but it isn’t often that we delve into the Clown Prince of Crime’s troubled psyche. What actually scares the Joker? It certainly isn’t the Dark Knight, whom he takes great joy in antagonizing. However, a fascinating new theory explains why Joker’s greatest fear is actually the Internal Revenue Service. Yes, really. So let's dive in.

In 1952’s Detective Comics #180, called “The Joker’s Millions,” the purple-wearing villain inherits millions of dollars only to realize he’s being punked by the criminal King Barlowe and the money is fake. In hindsight, the Joker should’ve known that Barlowe wouldn’t have left him a single cent given that they were enemies, but it’s rarely the case someone’s clever enough to fool the Crown Prince of Crime.

“The Joker’s Millions” was adapted onscreen in the 1998 episode of the cartoon The New Batman Adventures (a continuation of the popular Animated Series). In the episode, he says that he’s “crazy enough to take on Batman, but the IRS? Nooo, thank you.” Joker spends the entire episode grappling with his predicament. He’s torn between telling the IRS the truth to avoid tax evasion crimes and admitting that he’s been pranked by Barlowe and risk facing city-wide humiliation. But why is Joker so afraid of the IRS finding out about his counterfeit inheritance to begin with?

Reddit user Burnnoticelover suggests the reason for why Joker is so scared of being caught by the IRS is because the “insanity defense would never work for financial crimes, and he would go to state or federal prison instead of Arkham.” The gist of the theory is that Joker is comfortable with being sent to Arkham because he knows every nook and cranny. He understands the systems of Arkham and can easily escape without issue.

On the other hand, landing in federal prison would not do the Joker any favors and is far more of a permanent state. If he’s locked up there, there’s absolutely no way he’s getting back to his life of terrorizing Gotham City. Think of all the crimes Joker has committed and how many other criminals he’s betrayed, killed, or put in prison. Those very same people wouldn’t take too kindly to him and would likely want revenge, leaving Joker to fend for himself with no way out.

The Inverse Analysis — This theory is sound. Knowing Joker’s history means he’d want to continue slipping through the cracks of the legal system. The IRS is also an entity that functions outside of Gotham, which is where Joker primarily operates. If he gets in trouble with the IRS, there’s simply no way for the villain to control his fate and he’ll permanently lose his reputation and freedom. “The Joker’s Millions” is considered one of the sillier Joker stories, but the fact that his greatest fear is getting caught by the IRS and not Batman means the Dark Knight might have to step up his game.

On top of that, it's a pretty telling indictment of the United States prison system that the Joker would rather go to Arkham than a regular jail. The fact that this story first debuted in 1952 makes it all the more impressive (and depressing) that this still feels like the smart choice almost 70 years later.

The New Batman Adventures is currently available to stream on DC Universe.