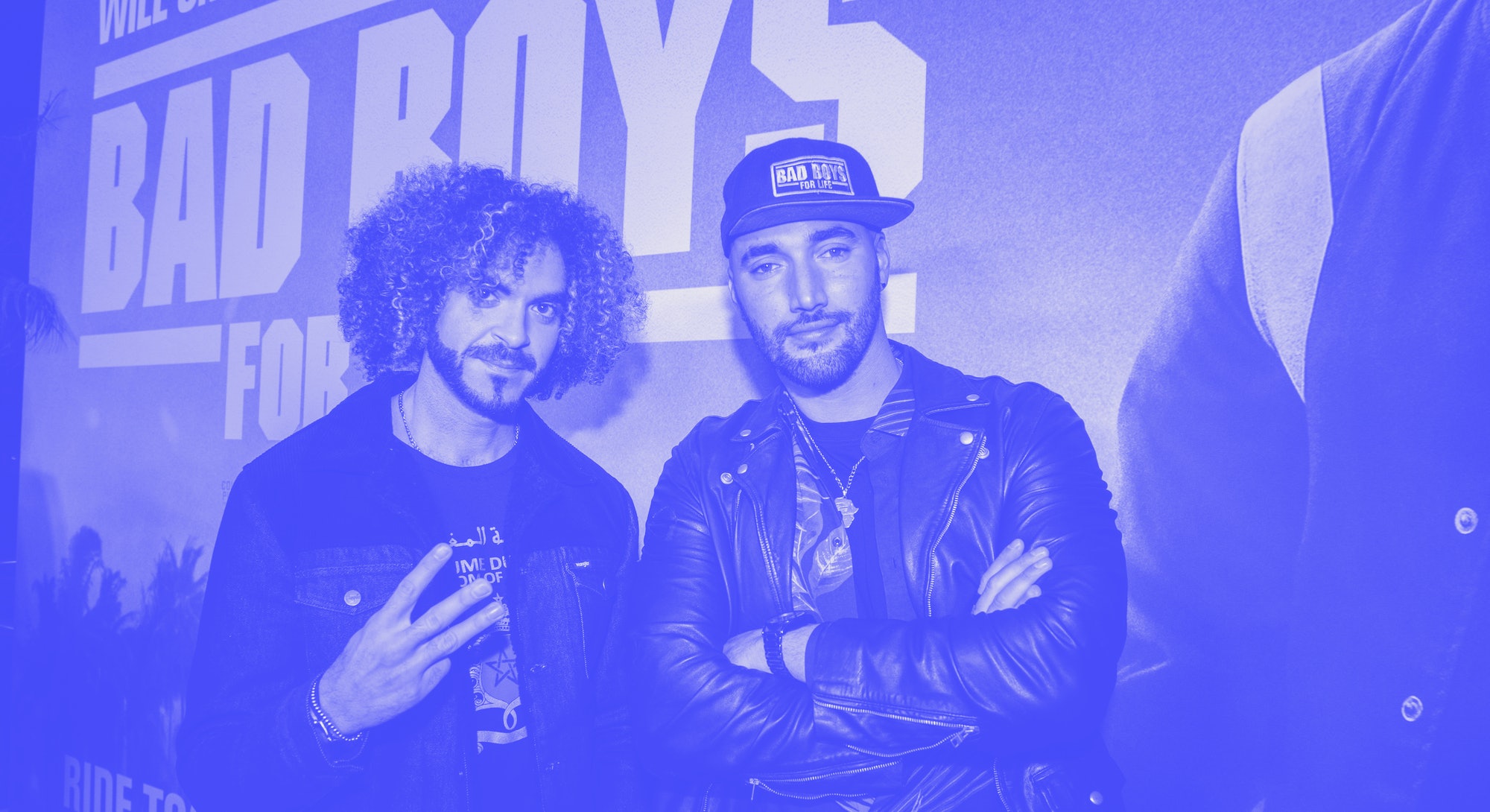 For the first time in a long time, Michael Bay wasn’t in control. While shooting his cameo in the movie Bad Boys for Life, the long-awaited third film in the buddy cop action films starring Will Smith and Martin Lawrence, the veteran filmmaker took directions from two millennial Muslims from Belgium who grew up loving Hollywood movies -- Bay’s explosive blockbusters most of all.

On the set, dressed in a summer suit and playing the role of wedding DJ, Bay gave only one piece of advice to the 30-somethings making their first studio picture. “Don’t fuck up my baby.”

“It was like meeting a teacher,” co-director Adil El Arbi tells Inverse. “We reminded him of him when he did Bad Boys.”

That day, Adil El Arbi, 31, and Bilall Fallah, 34, were 5,000 miles away from the LUCA School of Arts (also called St-Lukas) in Belgium, where they’d flunked out their first year and nearly gave up on movies altogether. Instead, they beat the odds, embraced their cultural identities, and made it to the big time to direct the bombastic Hollywood action flick they’ve forever dreamed of. But however much of a fairy tale ending that sounds, it’s not where their story ends. Because, for El Arbi and Fallah, Bad Boys for Life is just the beginning of a lifelong effort to change how the world sees the Muslim community beyond the narrow stereotypes Hollywood still falls back on more often than not.

“As a kid, I thought we were Americans, because the Americans are the good guys in Hollywood movies. So, you just assume, you know?” El Arbi says. “You hope that being a filmmaker here, you can show another vision of Muslims and Moroccans. We got an opportunity that nobody else [has] maybe in the world.”

In theaters now, Bad Boys for Life stars Martin Lawrence and Will Smith reprising their roles as two hotshot Miami detectives who become targets of a vengeful South American drug lord. The film picks up the dormant Bad Boys series first directed by Bay, who rose through Hollywood in the ‘90s from his iconic “Got Milk?” commercials and blockbusters like The Rock and Armageddon. He directed four out of five films in the Transformers series, which have a combined gross of $4 billion worldwide.

Although regularly criticized for his objectification of women and ostentatious directing style, nicknamed “Bayhem,” Bay’s movies remain quintessentially Hollywood, and exactly the films El Arbi and Fallah obsessed over when they met thirteen years ago as film students. It was an instant friendship.

The two saw in each other something they never saw anywhere else: Themselves.

Besides being the only second-generation children of Moroccan immigrants at St-Lukas, the duo also held a deep affection for American cinema. Hollywood big shots like Jerry Bruckheimer, Steven Spielberg, and Michael Bay carried more weight to them than the indie directors their white classmates raved about.

He adds, “You have Michael Bay, it's an event.”

"As a kid, I thought we were Americans, because the Americans are the good guys in Hollywood movies."

Adil El Arbi was born the child of Moroccan market vendors in Antwerp, the second most populous metropolitan city in Belgium. “I grew up in a not so chill neighborhood, you could say,” El Arbi recalls. “Antwerp in the '90s was a very racist city. You just felt the atmosphere because the racist party was the most popular party during this period. It was great growing up in Antwerp, but at the same time, if you're Moroccan, it was not the easiest thing to be.”

The hostile world outside compelled El Arbi to stay indoors and get lost in movies like Indiana Jones and Back to the Future. “I was not very sociable. I would only go home and watch movies. Television was my best friend.”

At eight years old, El Arbi learned a famous name that stuck with him forever: Steven Spielberg. “It started with Jurassic Park,” he says. “It was the first time I would see behind the scenes footage, and this guy with the hat and the beard and the glasses seemed to be making all the movies. I thought, I want to have his job.”

Meanwhile, 40 minutes away, Fallah was growing up in a middle-class family in bilingual Brussels. “There, you have two languages,” Fallah explains. “You have Flemish and you have French. If you talk French, you were cool, and if you talked Flemish, you were not. You were a sellout as you grew up there. So for me, it was really difficult to find myself in the beginning.”

Somehow, the two convinced their parents to let them attend Sint-Lukas, the only independent art school in northern Belgium. “My parents were very old [school],” El Arbi says. “I was an only child. They were worried that I would be fucked up or whatever.”

Despite being Muslim, El Arbi’s parents sent him to Catholic school, where “there were only white people.” The colors of El Arbi’s classrooms hardly changed at Sint-Lukas, where El Arbi attended on a government scholarship. “Our film school was an art school, and it was very white. White Belgians studied art.”

At Sint-Lukas, El Arbi and Fallah connected over their similar “cultural education” — most especially the guilt that comes when you’re the child of immigrants studying the arts, not medicine or business. You know, a “real job.” Also, they looked like each other. “There was no public figure of any color. No actors, no politicians. So you felt isolated,” El Arbi says. “That's why we connected right away, because we had the same background, the same struggles.”

"When you study in art school and you mention Hollywood, it's a bad word. You mention Michael Bay, that's no bueno."

The two worked on each other’s student films, acting as production assistants when they weren’t directing. It was an invaluable experience that allowed them to sync up their creative visions. “We were really on the same level,” says Fallah. “Every time I was making my short movie, he was on my set. Anytime he was making a short, I was on his. We organically started to work and became a duo.”

Then they hit their first major roadblock. They flunked out of school.

“Both of us didn't pass,” says El Arbi. Based on his tone, I can tell he’s still irritated all these years later. “Our movies were not the greatest, but other people, they made even worse movies and they passed! I was like, what the fuck is going on?”

“When I said to my parents, I want to do movies, my father said, ‘You better make it work,’” Fallah says. “Because every parent wants a secure job [for their kids], and being a director was not. It was super important the first year I pass. And we didn't pass. I felt devastated.”

Their failure wasn’t for lack of trying. “I studied like a motherfucker,” El Arbi says. They passed their written exams, too, but “the most important exam is the short film you make.”

Titled Etikettieren (“Labels,” in Dutch), El Arbi’s movie was about racism in Antwerp. By his own admission, Labels was not good. “It was really very cheesy,” he says, laughing about it now. “It had no plot. There was a racist character and a super artsy character. It was just cliches. I deleted the movie. It doesn’t exist.”

But the experience was a necessary kick in the ass. “What it made us understand is that when we made those shorts, they were not personal. They were just a game. We would make movies distant from our lives. That’s what we learned. We understood we get to tell stories, and our stories are not told. That's how we started to make more successful movies.”

“One of the teachers said to me, ‘You will never be a filmmaker,’” says Fallah. “There was a point I was thinking, ‘Let's go to the army and go to war and make documentaries there.’ But by being flunked, it pushed me to be more serious with what I was doing.”

In 2014 the directors worked on their first feature (funded through the Flemish Audiovisual Fund) Image, an urban drama about an ambitious reporter shooting a documentary about Moroccan immigrants in Brussels. But it was their acclaimed second feature, 2015’s Black, that put them within spitting distance of Hollywood.

A retelling of Romeo and Juliet, Black takes place in modern Molenbeek, a Belgian city closely tied to Islamic terrorism; a 2016 report by Politico called Molenbeek “a terrorist safe haven.” The film’s young cast was made up of unknowns native to Molenbeek, all telling a story about the streets they roamed every day. The success of Black at the Toronto International Film Festival gave them a chance to meet their heroes, including Jerry Bruckheimer, the legendary producer of Arbi and Fallah’s favorite movies including the original Bad Boys.

"We understood we get to tell stories, and our stories are not told."

Fast forward several years and one FX pilot (Snowfall) later, Adil El Arbi and Bilall Fallah found themselves on the set of Bad Boys for Life, directing none other than Michael Bay himself for his cameo. “He was kind stressing his lines, but he did it perfectly,” remembers Fallah. “We did a 360, Michael Bay-style shot around Michael Bay. That was, for us, super important.”

With Bad Boys for Life in theaters, El Arbi and Fallah are a lifetime away from the film buffs who bonded over a love of action movies. They now know first-hand what goes into making “Bayhem.”

“Michael Bay is an innovative director. I always looked up to him,” says Fallah, “But I have even more respect now because when you make an action movie, it’s so fucking difficult. When I look at those scenes now, I know the pressure, the budget, having all this crew to lead. That alone is difficult. I learned by making this movie.”

“‘Bayhem’ is, in our mind, how you get the camera moving,” says El Arbi. “It's kinetic, it's extravagant. And it's difficult to achieve. Lots of people will try and it will not work. We're not Michael Bay. We're different directors.”

But as Muslims, have El Arbi and Fallah ever felt alienated by Hollywood’s stereotyping of the Middle East?

“Only sometimes,” says El Arbi. “When a movie has stereotypical Middle Eastern characters, I'm like, ‘I'm not like these guys. These are bad guys. I'm the Americans.’ We all want to be American when you grow up, even if you’re Muslim. My family would say they’re portraying a racist view of Islam. I'm like, ‘But the movie's cool, so it's good.’ That's how you grew up.”

It wasn’t until El Arbi grew into adolescence, alongside the events of 9/11, that he reckoned with Hollywood’s xenophobia. “As racism becomes more clear in your life, you start to be more critical of it. But Hollywood still remains your first love, and you still love America.”

Just by being here, El Arbi and Fallah hope to inspire real change. “To have Will Smith and Martin Lawrence and Sony say, hey, let's give this big-ass franchise to two Moroccans and Muslims, that is something you cannot forget. They didn't care. They just thought, let's give them a chance."

Bad Boys for Life is in theaters now.