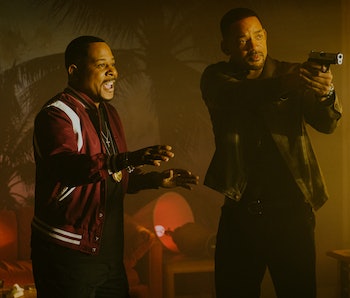 They aren’t superheroes, but Martin Lawrence’s Marcus Burnett and Will Smith’s Mike Lowrey have returned after 17 years and are back on the prowl for bad guys in Bad Boys for Life. Like a Marvel movie, the ending has a credits scene — not technically a post-credits scene, because it plays just before the credits actually roll — that may hint at the next movie.

And in an interview, co-director Adil El Arbi tells Inverse what the next Bad Boys movie could be called. (And if it’s not the title, well, it’s just a very good one that any studio executive would be boneheaded not to use it.)

Spoilers for Bad Boys for Life ahead.

At the end of Bad Boys for Life, devil-may-care Miami detective Mike Lowrey (Smith) learns that he has a son, Armando (Jacob Scipio), born out of his affair with Isabel (Kate del Castillo), the wife of a powerful South American drug lord whom he’d taken down in an undercover operation.

When Armando and Isabel roll into Miami to exact revenge, Mike is on their list, which necessitates Mike to re-team with his ride or die partner Marcus (Lawrence) and a new squad of millennial cops dubbed “AMMO.”

With Isabel defeated and Armando behind bars, Marcus settles into retirement as a new grandfather. But because crime never sleeps and a new case has begun, Mike needs a new partner. While AMMO is certainly, you know, there, Mike needs someone he can actually trust, mano-a-mano.

Because Mike has long shirked putting down roots, he finally has a real opportunity to build a relationship with his son. And he appears to do it the only way he knows how: Taking down bad guys, one by one. Mike offers Armando a chance to shave off years of his sentence by aiding his daddy in a case. Does he accept? The film ends before an answer is revealed, though it’s heavily implied that he does.

While a Bad Boys movie only could, and should, star Marcus and Mike, it’s entirely possible that a fourth movie could involve Mike working alongside his son, who has a tremendous mean streak that will require some serious parenting. Imagine that movie as the next Bad Boys.

Is there a fourth Bad Boys coming soon?

Naturally, the only way for another Bad Boys movie to get a green light is if Bad Boys for Life turns a profit. That may happen. In a Friday report from The Hollywood Reporter, the movie is on track to being the number one movie of the weekend with a $6.4 million gross out of preview screenings alone.

That’s very good, especially for an R-rated action film opening in January, a dead zone for blockbusters. The movie is on pace to outgross the competition, which includes the release of the Robert Downey Jr. family film Dolittle.

In an interview with Inverse, director Adil El Arbi, who co-directed the film with best friend and collaborator Bilall Fallah, admits he doesn’t know if there’s a fourth Bad Boys movie in the works. But he did offer up a cool title.

“I can only say, I don’t know at this point if there’s going to be a Bad Boys 4 or a Bad Boys Forever,” El Arbi tells Inverse.*

Bad Boys Forever? That’s genius. In a perfect world Bad Boys for Life would have been the title for the fourth movie and not the third. (Bad Boys 4 Life? Get it?) But if a fourth movie happens and someone actually wants to take advantage of an idea native to the franchise, then Bad Boys 4ever is a hell of a title.

Bad Boys for Life is in theaters now.