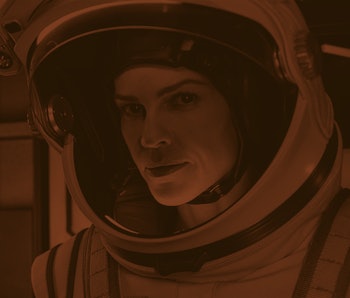 Away touched down on Netflix on Friday, and there's a decent chance you've already binged all 10 episodes of this gripping space travel drama. The show hasn't been renewed for Season 2 yet, but showrunner Jessica Goldberg tells Inverse she already has some big ideas for what comes next, from bringing in Space X (or some fictional private technology company) to exploring some of the biggest questions in the universe.

Warning! Spoilers ahead of Away Season 1 🚀

Seriously, if you haven't finished Away yet please go watch it now before reading the rest of this article. Don't worry, I'll be here waiting for you, right below this screenshot of Hilary Swank as Commander Emma Green.

Still here? Great. So, as you know, Away ends with the crew successfully touching down on Mars, but as they exit the ship, their adventure has just begun. There's still a 14-month mission plus the 8-month journey home, and a lot can happen in that time.

For Goldberg, the biggest question is whether the crew will discover life on Mars. After all, it's widely accepted that the red planet once looked a lot like Earth and could have supported life, so is it possible some of that life is still hanging around?

Before you ask, Golberg isn't talking about walking and talking aliens.

"When I say life, I mean like a microorganism," she says. "I don't mean an alien, the show would never go in that direction."

“I don't mean an alien, the show would never go in that direction.”

Beyond alien life, landing on Mars could also represent a major step towards turning humanity from a one-planet species into a galaxy-spanning empire. And this could mean the introduction of Space X and its founder Elon Musk — or a fictional approximation of the technology entrepreneur determined to get humanity to Mars.

For Goldberg and her team, it was important that the first season of Away focused on the world's five largest space agencies working together to put the first humans on Mars. It's an uplifting, if somewhat unlikely story, given the fact that in our own world the only organizations seemingly capable of this are private companies like Space X.

"I do feel that's a story that's super important," Goldberg says, "Right now, we can't get anywhere without that private sector money, and I think it would be great to bring that storyline in."

She adds that it was an idea they discussed "a lot," and that if Away is lucky enough to get a second season "that would be a part of what we continue to explore."

The story of Away is just as much about the characters as it is the space travel, and Goldberg is already thinking about what could happen to those characters in Season 2. How will Misha the "super-uber-masculine man" cope with losing his eyesight? Will Kwesi start to question his religious faith if they discover life on Mars? And what about Emma's husband Matt and daughter Lex back home?

"Somehow, that family managed to stay very tethered to each other in the first season," Goldberg says, "but this is 14 months on Mars and then 8 months back. So just all those questions seem so exciting.

She adds: "It feels like there's a great season two."

Away Season 1 is streaming now on Netflix.