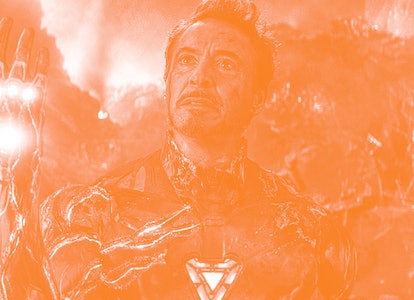 It’s hard to believe it’s been two years since Avengers: Endgame hit theaters. Since theaters were shut down less than a year after its release, the magic of seeing the portal moment in a crowded arena hasn’t really been captured since.

But in an attempt to replicate that ecstatic feeling, star and MCU veteran Robert Downey Jr. has released two clips showing the stripped-down versions of two powerful Endgame moments — one that will forever go down as an iconic line, and one left as a deleted scene.

He Is Iron Man — On his Instagram story (and captured by helpful Redditor u/sweatshirtjones), Downey Jr. marked the Endgame anniversary by showing the moment he filmed the iconic “I am Iron Man” moment, kneeling in a room of complete green screen, wearing only the top part of his trademark suit over a black t-shirt and jeans.

The clip is quiet, so prepare to amp up your volume to hear him whisper the line that would change the MCU forever.

Despite the “Iron Man, unplugged” vibe, this moment is just as powerful without all the VFX bells and whistles. Just one man, doing what he knows he has to do in order to save the world.

Of course, the other stuff makes it much cooler to watch in a theater, but this glimpse just proves how much of the MCU’s success is due to the actors.

As RDJ says after he snaps, “Mind BLOWN!”

He’s a Soul Iron Man — Meanwhile, on Twitter, Downey Jr. released another video of a lesser-known moment, but one that’s also rich with emotion.

It captures the filming of a deleted scene where Tony Stark enters the Soulworld through the Soul Stone just after his own “snap.” where he encounters an older version of his daughter Morgan, played here by Knives Out’s Katherine Langford.

While this scene didn’t make it into the final cut of the film, it just proves Endgame was initially even more emotional than the ultimate three-hour-long masterpiece. Tony was able to say goodbye to his daughter and see her grow up, even if it’s not the way he wanted it.

The Inverse Analysis: The fact that these two moments are how Robert Downey Jr. chooses to remember Endgame proves just how instrumental Tony’s journey is to the movie and to the Marvel Cinematic Universe altogether. For him, and for us, Endgame was a love letter to the character of Tony Stark, giving him the sendoff he deserved, and a legacy we would see come to fruition in 2021 with The Falcon and the Winter Soldier.