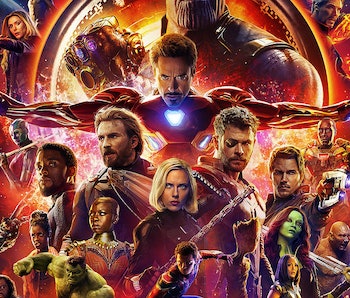 The next Avengers movie is a distant light of hope at the end of the movie delay tunnel. Despite a year having passed since the last MCU installment, it seems inevitable the Marvel Universe will pursue another ambitious crossover beyond Phase Four. But where can we go from here? Defeating Thanos was a challenge that spanned two movies, incorporated time-travel, and killed off some of pop culture's most iconic heroes. It might be difficult to top that.

Luckily, there's a villain from the comics who definitely fits the bill. Here's why this cosmic baddie makes perfect sense as the focus for Marvel's next massive big-screen crossover.

Galactus is one of those comic-book characters who heighten the stakes simply by existing. He's basically a god, has seemingly limitless powers, and is omniscient. He's known as the Planet Devourer, and that nickname is not figurative. He survives on the cosmic energy leached from stars and planets as he consumes them.

In the comics, Galactus was mainly a Fantastic Four villain, though he appeared in other comic runs too, including those of beloved Avengers like Thor and Doctor Strange. The mythology behind him is vast and spans entire incarnations of the multiverse, but it's a safe bet to say he's one of the most powerful figures Stan Lee ever created.

This is the perfect time for the Avengers to face off against a possibly insurmountable foe. After the loss of their leader, they're going to need to find a way to prove themselves, and any villain less powerful than Thanos wouldn't suffice. Plus, there's a possibility other Avengers would need to be called in, making it truly a team effort.

Galactus's inclusion in Marvel's next big-screen crossover would also have a bonus benefit. His inclusion would be a direct tie to the Fantastic Four, whose absence from the canon has only become more conspicuous through the different phases of the MCU. In fact, Galactus allowed Norrin Radd to transform into the Silver Surfer, convincing the cosmic being not to devour his home planet of Zenn-La. There could be an opening for him to join the team as well.

If Galactus is so immortal, how could the Avengers kill him? They could starve him of his food source, planets and stars, but keeping a god-like figure from munching on planets is even more difficult than it seems. The only weapon that holds the ability to strike fear in Galactus is the Ultimate Nullifier, wielded by Reed Richards to force Galactus into sparing Earth in The Fantastic Four Vol. 3 #49.

Galactus would be the logical next step for an Avengers villain, considering the need for escalation from Thanos, and the February 2021 introduction of the Eternals in their own feature, making way for a whole new league of supervillain: a faction so mythical and otherworldy that they are godly in their own right.