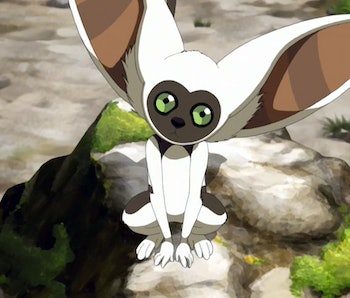 The secret life of pets. Avatar: The Last Airbender would be nothing without the quiet comfort of Aang’s loyal pet lemur, Momo. Aang first discovered Momo in Season 1, after visiting the Southern Air Temple, and the two became inseparable after that. The flying lemur soon joined Aang’s crusade to stop the Fire Nation and, as one of the last remnants of the Air Nomad culture, bonded with Aang on a deep, emotional level. However, Momo wasn't always the same lemur we know and love today and an intriguing fan theory suggests there's more to Momo than meets the eye.

Reddit user PM_ME_SOME_ANY_THING argues Momo is the reincarnated form of Monk Gyatso, Avatar Aang’s previous guardian and mentor. One hundred years prior to the start of Avatar: The Last Airbender, Aang studied under the tutelage of Gyatso at the Southern Air Temple. Gyatso was kind, gentle, and was considered to be the greatest airbender in his lifetime.

The theory stems from the fact that Momo is the one who led Aang to Gyatso’s remains in Season 1 and stuck with the Avatar all throughout the remainder of the series, never returning to the Southern Air Temple or flying off to be elsewhere.

What’s more, Aang often spoke to Momo like he was a person, confiding in him about his doubts, fears, and deepest thoughts. Sometimes, Aang even came to conclusions about what he should or shouldn’t do in any given situation after mulling it over in one-sided conversations with the flying lemur. By comparison, Aang’s bond with Appa, his trusted bison, was much more typical of a pet-human relationship.

Of course, Avatar: The Last Airbender never confirms whether humans could be reincarnated into animals. That said, the animated series is heavily influenced by aspects of Hinduism and Taoism, both of which maintain the belief that human spirits don’t die and can be reincarnated in the form of animals. So, it’s possible that Monk Gyatso was reborn as Momo. It would certainly explain his and Aang’s connection despite Gyatso having a limited amount of scenes on the show.

While Momo may potentially be reincarnated, his character design was actually influenced by My Neighbor Totoro's titular character. In the book Avatar: The Last Airbender - The Art of the Animated Series, series co-creator Bryan Konietzko also revealed that Momo was called Momo-3. Konietzko described this early incarnation as "a little robot, a cyclops monkey" who hailed from an advanced technological civilization.

This early version of Momo had a much larger head, one that also included Aang's blue Avatar arrow. Momo-3 also carried a staff similar to Aang's, which the robot monkey kept at his side. However, the creators decided to forego on the more futuristic version of Momo so that he would look more like an adorably cute lemur rather than a mechanical sidekick. It's safe to say that Momo's final design is aesthetically pleasing and better suited to The Last Airbender's vibe.

The Inverse Analysis — As it turns out, the creators of Avatar: The Last Airbender did have plans to connect Momo and Monk Gyatso after all. The Avatar Extras for Season 1’s “The Southern Air Temple” episode revealed that early drafts of the show included Momo being a reincarnated Gyatso. However, those plans were apparently scrapped in the final version of The Last Airbender.

It doesn't seem like this tidbit was ever brought up again in any follow-up interviews with the creators. Even so, the theorist was right on the money. It’s too bad this wasn’t actually included on the show because it would have added a lot more depth to Momo and Aang’s relationship, while underscoring the never-ending nature of the Avatar cycle.

All three seasons of Avatar: The Last Airbender are streaming on Netflix.