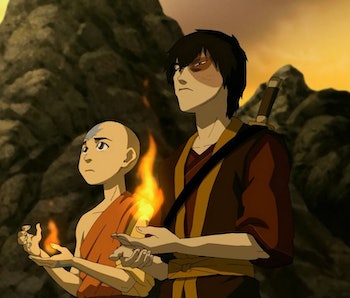 Bending powers have historically been passed down through genetics on Avatar: The Last Airbender. A firebender can’t train if they aren’t born with the ability. It’s an indisputable piece of mythology that is reiterated in the show's sequel series, The Legend of Korra. However, there seems to be a discrepancy regarding the origins of bending, as told by both animated shows. Now, an intriguing Avatar theory may reveal the truth about an age-old bending mystery.

The Last Airbender purports that humans mastered how to bend fire, air, water, and earth by learning from badger moles, dragons, and other original benders. Meanwhile, The Legend of Korra states that human benders originated some ten thousand years prior and that lion turtles, once mankind’s protectors that housed entire cities on their backs, passed down the power of the elements. The two origin stories conflict with each other, with Legend of Korra seemingly retconning badger moles as the original benders instead of lion turtles. So, what is the truth?

Reddit user JayNotAtAll theorizes the lion turtles did pass on bending abilities, but that the stories of them being the original benders were lost to time. The theorist adds that at some point after Wan, the first Avatar, a mass genocide wiped out most of the benders.

The ones who remained likely hid their powers to evade death. As the generations went on, the art of bending began to dissipate. That is, until humans began to learn how to control the elements from dragons, badger moles and others, which is why they’re referred to as the original benders in The Last Airbender. It’s possible that this is also the reason that no one really seems to remember Avatar Wan in Legend of Korra.

The idea of mass genocide is incredibly tragic, but also plausible in light of the history of the Fire Nation, who wiped out all of the Air Nomads save for Aang, who was frozen in ice. It’s not hard to imagine that non-benders may have grown fearful of those with powers and wanted to eradicate them, resulting in the historic discrepancy of the bending’s origins.

It’s still possible for both origin stories to be true. Perhaps the lion turtles passed on the power to bend elements to humans, but didn’t teach them how to master the ability. After all, every bender has to train to fully master the control of the elements. Aang didn’t learn how to control his airbending in his sleep, and it took Katara some time to evolve her waterbending skills. Enter the badger moles, who trained Toph in the use of her earthbending, and the dragons, who trained Aang and Zuko in mastering the art of firebending.

Though the lion turtles once populated the earth, there’s only one left. It’s possible that most humans have simply forgotten that they’re the original benders after thousands of years. Of course, the discrepancy remains regarding who the original benders are. We may never know if the lion turtles bestowed the other animals with the gift of bending or if badger moles and other creatures were born with the skills already. But, perhaps not all mysteries are meant to be solved.

More like this
Entertainment
Jan. 26, 2023
Critical Role's best campaign is finally becoming an animated series
By Dais Johnston
Culture
Jan. 24, 2023
Bruce Timm’s Justice League was a blueprint for the superhero team-up series
By Hoai-Tran Bui
Entertainment
5 hours ago
How The Last of Us Episode 4’s Ending Sets Up a Tragic Subplot — With a Twist
By Dais Johnston
LEARN SOMETHING NEW EVERY DAY.
Related Tags
Share: