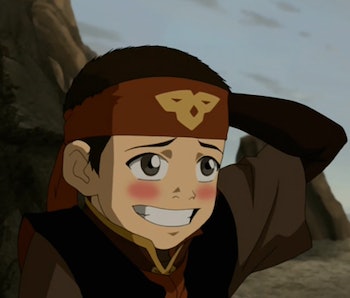 Avatar: The Last Airbender is sort of like the 1999 movie Blast From the Past. They're both stories about people who are removed from society for a long time and then attempt to reintegrate into a strange new world. Except, Brendan Frasier only spent a few decades in a bunker, while Avatar Aang was frozen in ice for 100 years. So when Aang is found and rescued by Katara and Sokka, his vocabulary is understandably outdated.

There's one phrase in particular that still doesn't make sense even when you consider Aang's fish-out-of-water backstory, but a fun new theory uses an Easter egg from sequel series The Legend of Korra to explain this a mystery

In Season 3, when Aang uses the alias Kuzon to infiltrate a Fire Nation school, he whips out the local phrase, “Flameo hotman.” Prior to Aang’s disappearance, the word flameo was used as a greeting or to say goodbye, while hotman typically meant “sir.” Aang was thrilled that he could use this terminology to address his classmates and even Sokka and Katara. However, everyone kept giving him strange looks whenever he said it. Later, when he used hotman to address Zuko, the Fire Nation prince was shocked.

Building off of a previous theory that suggested “Flameo hotman” was a phrase Kuzon taught Aang as a joke, Reddit user CyHoot believes that not only did Kuzon teach Aang the wrong vocabulary, but that he “also got him to swear at everyone he met.”

The word flameo resurfaced again in Season 2 of Legend of Korra (a sequel series set one Avatar cycle into the future) when Lin Beifong, Toph’s daughter, asks, “What the flameo just happened?” in regards to Mako and Avatar Korra’s break-up. However, the way that Lin used it on the show was definitely not to say hello or goodbye. It’s possible the word simply evolved over time, transitioning from a greeting to a curse. This happens all the time in our world (the word awful used to reference things that inspired awe and now it’s main use is to describe something terrible).

Of course, it’s never confirmed whether Kuzon was the one who taught Aang the Fire Nation phrases since he’s only mentioned briefly in The Last Airbender. We know that Aang was gone for some time and the world moved on without him, so it’s possible he just didn’t consider the fact that a century alters the use and meaning of certain words. That aside, the Legend of Korra definitely helps to explain why everyone kept looking sideways at Aang whenever he said “flameo” and “hotman” in the same sentence.

The Inverse Analysis — The words flameo and hotman are also referenced in the 2019 novel The Rise of Kyoshi, which chronicles the life and times of Avatar Kyoshi nearly 400 years prior to the events of Avatar: The Last Airbender. Written by F. C. Yee and Avatar co-creator Michael Dante DiMartino, the book is considered canon and confirms that “flameo hotman” was indeed a Fire Nation phrase. In fact, “hotwoman” was also employed by the Fire Nation’s people.

While Aang’s use of flameo hotman was likely meant for comedic relief on the show, the Easter egg points to a disconnect between Aang’s past and present life. He’s always been a kid caught between two distinct lifetimes and Avatar: The Last Airbender sometimes explored the dichotomy in subtle ways.