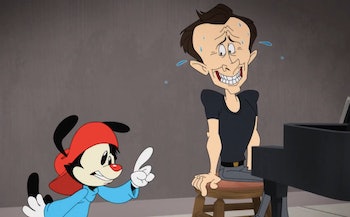 Rebooting any show over 20 years after it ended is a daunting task, but thankfully, Animaniacs remains zany to the max in its new iteration on Hulu. The Steven Spielberg-produced reboot manages to capture not only the humor and animation style of the original, but also the music that made Animaniacs such a standout success in the ‘90s.

A big part of the reboot's success is its songs, which capture the same tone as the original while updating the references and style — be it with pop culture jokes or new genres like a battle rap or a K-pop number. Episode 10 even sees Randy Rogel, the Animaniacs original composer and songwriter, returning in cartoon form with a new song.

In the episode, the Warners discover a Russian knock-off of their show and find a kidnapped Rogel on the set forced to write music, including a knockoff version of “Wakko’s America” listing the former Soviet states.

“They had me work on a parody of our theme song called Animanyet,” Rogell tells Inverse.

Rogel, who first joined the Animaniacs team by pitching what became the classic "Yakko's World," says part of what made the original songs so distinct was his theater background. “Most people were writing pop or rock songs at the time,” he says. “I looked more towards Broadway.”

“Yakko’s World,” of course, is the song where Yakko Warner (voiced by Rob Paulsen) lists every single country in the world to the tune of the Mexican Hat Dance. Though Rogel says he never intended to write a geography lesson for kids, but it worked, and it wasn’t long before Animaniacs creator Tom Ruegger and executive producer Steven Spielberg asked Rogel to pen a series of educational earworms, starting with Wakko singing the U.S. state capitals.

“By the time they asked me to do a song about the universe I finally said, ‘Guys, we can do more than list songs!’” he recalls.

Rogel ended up writing most of the songs from the original series, and a couple of the new ones too.

Like the original, the Animaniacs reboot is full of pop culture references, some of them incredibly specific (like a joke about the 2013 Oldboy remake) but most are broad enough they don't feel dated — even if the episodes were written two years ago. This was important to Rogel, even back in the '90s, and it sometimes led to him butting heads with Warner executives.

In one segment titled Video Review, the movies at a video store come to life at night. The executives wanted to include recent (by then) movies like Happy Gilmore and Cadillac Man, but Rogel was more focused on Casablanca and The Wizard of Oz — the final episode includes a mixture of both recent and classic movies.

“I was always careful when I wrote those songs with pop culture references,” Rogel says. “I wanted them to be relevant forever, rather than movies just for the time.”

Though the new episodes show not much is different in terms of humor and references, there’s one area where Animaniacs has changed a lot. As Rogel tells it, back in the ‘90s, he mostly worked on the songs on his own, whereas “they have many more hands on deck now.”

For example, one of Rogel’s song from the Animaniacs revival started with a simple idea: what if Dot wakes up one day and she has a zit? “The reason she's horrified is that her fans love her so much that they'd be destroyed to see a zit,” Rogel says.

He pitched it to showrunner Wellesley Wild, who suggested that the zit itself was a person who was horrified that he had a Dot on him. This type of collaboration turned what might have been a classic Rogel solo song into a significantly bigger production.

As Vulture reported, the "Catch Up Song" from the first episode alone required "a team of well over 100 people roughly 240 hours total to produce just this two minutes of the show." Compared to the way Rogel pretty much ran the Animaniacs music on his own during the original run, newcomers Tommy Reilly and Roddy Hart tell Inverse that most of the new song lyrics came from the episode writers.

“For the most part, the writers would give us some lyrics, and then we'd add a couple of lines or shape them to make them work as a song,” Reilly says.

Because the number of people involved in the songs for the Animanics reboot (from composers to songwriters to episode writers) was bigger, everyone was involved in different parts of the process simultaneously. “One moment we wrote a song, then the next we're orchestrating a song Randy wrote or even performing a song.”

“We did three songs in Episode 2 alone and they’re as varied and frantic as they come,” Hart adds.

Each segment in Animaniacs' second episode features its own original song in a different style. There’s a Despacito-inspired music number involving a Justin Bieber-looking cyclops, a medieval minstrel song, and a Broadway-inspired anthem about cartoons demanding the right to vote.

Not only do the writers jump around from segment to segment, but more often than not, they have no idea what the context of a song will be. But that’s nothing new for Animaniacs, and Rogel wrote most of his songs in a vacuum back in the ‘90s as well. Jamming three or more unrelated sketches together and calling it an episode worked back then, and it still works today, even if the viewing experience can sometimes feel a bit jarring as a result.

“I would write a song about all the countries of the world,” Rogel says, “and then the show would cut away to a story about selling cookies to Albert Einstein.”

The new Animaniacs is streaming now on Hulu.