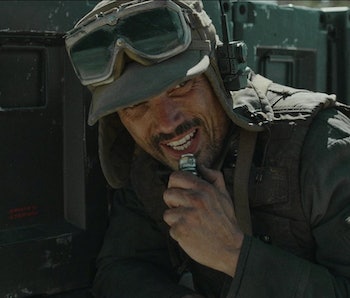 By the time of Rogue One: A Star Wars Story, Captain Cassian Andor fully understands his relationship with the Rebel Alliance. But just five years earlier, his feelings about the Alliance were ambivalent at best, partly because the Alliance as we know it didn’t exist yet. By the end of Andor Episode 10, however, one galaxy-changing partnership has been formed.

Spoilers ahead for Andor Episode 10

In Andor Episode 10, the prisoners on Narkina 5 finally escape... except for Kino (Andy Serkis), who can’t swim. The prisoners scatter in all directions, and as the episode closes, we see Cassian and Melshi (Duncan Pow) setting off together.

It turns out this prison storyline has been a not-so-secret Rebellion origin story all along. Eagle-eyed fans clocked the appearance of Pow as Ruescott Melshi back in Episode 8 when Cassian was first brought to the facility. Now Episode 10 concluded with the two of them teaming up.

Rogue One’s ending makes more sense now. Just before the movie’s big climax, Jyn, Cassian, and the gang are joined by a sizeable chunk of Rebel soldiers. These folks are all volunteering to help with the daring mission and, in this moment, Cassian tells Jyn, “We’ve all done terrible things on behalf of the Rebellion.” Tellingly, these soldiers are willing to follow Cassian despite his background. Melshi is front and center, and he’s later instrumental during the raid on Scarif.

In the context of Rogue One, we didn’t know why Melshi and these other Rebels were so willing to break with the rest of the Rebellion and join this dangerous mission. But Cassian’s bond with Melshi makes this more understandable. We now know at least one reason why there’s a real sense of loyalty between them: They broke out of prison together.

So, now that they’re free, just how close will Melshi and Cassian get to formally joining the Rebel Alliance? Andor Season 1 only has two episodes left, so there’s still time for quite a bit to happen. However, because the Rebellion is so fractured at this point in the timeline, whatever version of the Alliance that Cassian and Melshi potentially join won’t be like what we saw in Rogue One and A New Hope. In fact, Andor hasn’t made it clear if anyone other than Saw Gerrera has an actual base.

In A New Hope, we’re told the Rebels had an outpost on Dantooine before their operations moved to Yavin 4. So, if Melshi and Cassian end up anywhere of note in the final two episodes, maybe they’ll be on Dantooine.

If Andor Season 1 does end with Melshi and Cassian joining the actual Rebel Alliance, that poses interesting questions for Season 2. If Andor Season 1 is all about setting up the Alliance, does that mean Season 2 is a Rebel spy show starring the duo? Here’s hoping.

Andor is streaming on Disney+.