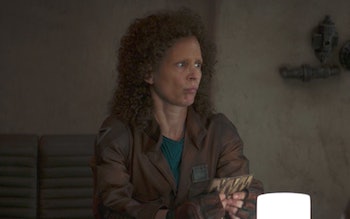 Does Amy Sedaris own every single classic droid in Star Wars?

Well, Peli Motto — the character Sedaris plays on The Mandalorian — doesn't own C-3PO, R2-D2, or BB-8, but she seems to have nearly every other old-school bucket of bolts hanging around. And in Season 2, The Mandalorian seems to be doubling down on Easter eggs mostly centered on the classic Star Wars planet Tattoine.

So if Peli does have all literally all the old droids we saw in A New Hope and The Phantom Menace, what does that say about her backstory? Did she know Luke Skywalker? Han Solo? Uncle Owen? Let's look at the droid Easter eggs and see what they tell us!

Spoilers ahead for The Mandalorian Season 2, Episode 2 — "Chapter 10: The Passenger."

Starting with The Mandalorian Season 1, we saw Peli Motto surrounded by a ton of droids in her Mos Eisley docking bay. But which droids have we actually seen so far?

Pit Droids from The Phantom Menace (Season 1, Chapter 5, "The Gunslinger.")

The first "classic" droid we saw with Peli Motto was actually from the prequels. The infamous Pit Droids, that ran around Watto's shop, and confused Jar Jar Binks, faithfully helped Peli Motto fix the starships that came in.

Do these Pit Droids indicate that Pelli knew Anakin Skywalker or Jar Jar Binks? Unlikely. But, hey, maybe she bought them from Watto? The last time we saw Watto he was pretty hard-up, so maybe he sold these droids to Peli Motto sometime before the Empire came to power. She would have been a lot younger then, but it's not totally out of the question.

Gonk Droids from A New Hope (Season 1, Chapter 5, "The Gunslinger.")

Although we saw a famous power droid — the "Gonk Droid" in the first episode of The Mandalorian ever, Peli Motto also has a few stashed in her hangar bay in her first episode, too. These droids are pretty dang common. Seems unlikely these droids give her any connection to a classic character from either the prequel or original trilogies.

Okay, now we're talking. The droid that gives Mando the map to the small mining town of Mos Peglo is totally R5-D4. This not just the same model of droid from A New Hope, it's actually meant to be the exact same droid.

When the Jawas brought all their droids to sell to the Lars family moisture farm, Uncle Owen initially bought C-3PO and R5-D4. But then, R5-D4's head exploded, and the Lars family got R2-D2 instead. Yes, Luke says, "this R2 unit has a bad motivator" but, it's been fairly well established that the droid's name — "the red one" — was R5-D4. What does it mean that Peli Motto owns this exact droid? Well, it means she traded with the same Jawas who sold R2-D2 and C-3PO to Uncle Owen and Aunt Beru. Then again, most of those Jawas were killed by Imperial troops in A New Hope, but, apparently, they didn't' destroy the merchandise.

The idea that this droid was owned by the Jawas who were (mostly?) killed by Stormtroopers, seems to indicate that any surviving Jawas who had it probably wanted to get rid of it. You can easily imagine a situation where Peli Motto got R5-D4 for free, which could explain why she's constantly frustrated with it. It's also possible that the "bad motivator" Luke pointed-out in R5 still hasn't been fixed. Either way, did Pelli know the Lars family and Luke? It seems very possible the answer is yes.

Treadwell Droid from A New Hope (Season 2, Chapter 10, "The Passenger.")

In The Mandalorian Season 2 Episode 2, Peli calls the "Treadwell" droid by name. We saw this kind of droid being sold by the Jawas in A New Hope, but we also saw several of them working the Lars Moisture farm in the same film. Like the Gonk droid, you could argue that these droids are common enough that there's no connection between this Treadwell and the ones that interacted with Luke and Uncle Owen. Then again, it stands to reason that someone went to the Lars Farm after the Imperials killed Owen and Beru. Maybe Jawas or other scavengers got old of this Treadwell from the Lars farm, and later, sold it to Peli.

Or, an even more likely scenario: Since Owen Lars had so many of these droids, maybe he just sold one to Peli at some point when he was in Mos Eisely on business.

While playing Sabacc with an alien called Dr. Mandible, Peli commits Mando to a job that involves ferrying a Frog Layd alien across the sector at sub-light speeds. But, this deal is all made in the Mos Eisley Cantina, the famous bar in which Han Solo killed Greedo and made the deal to take Obi-Wan Kenobi to the planet Alderaan.

Peli seems to know the bar pretty well and appears equally comfortable at this famous table. At this point, it's been about nine years since the events of A New Hope, and it's very likely that Peli was working in the Mos Eisley docking bays back then. This fact, combined with her hanging around the Mos Eisley Cantina, means it's super-likely that Peli Motto knew, or knew of, Han Solo. Sure, Han didn't live on Tatooine, but he seemed pretty comfortable at that table.

Crucially, both Han Solo and Luke Skywalker are alive during the events of The Mandalorian. And if Peli Motto rubbed elbows with both of them — via a famous bar and several famous bots — it seems possible, however unlikely, that either of those guys could show up and do a little business with Mando, too. This time, Han's got the money. Really.

The Mandalorian is streaming on Disney+.