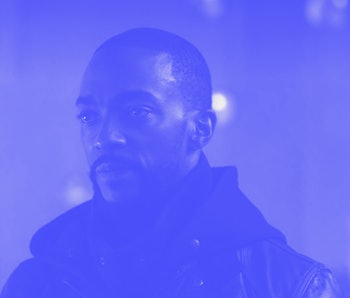 Altered Carbon is back on Netflix for Season 2, with a new look with same gritty dystopian taste. This go-around, stakes are much higher than Season 1's murder mystery. Anthony Mackie's turn as former rebel soldier Takeshi Kovacs brings the story to new heights, as he teams up with Quellcrist Falconer and Takeshi Prime, a double-sleeved version of himself, in order to take down the system they failed to thwart many years ago.

Throughout Season 2, Takeshi is referred to as the last envoy, like it's a codename. In reality, it's more like a legend. In order to explain it, we have to dive deep into Altered Carbon lore. Spoilers ahead for Seasons 1 and 2 of Altered Carbon.

In the world of Altered Carbon, people can be transported by extracting their subconscious (known as a "stack") and inserting it into a new body, or "sleeve." This was especially convenient given that humanity had colonized entire planets.

However, it wasn't a perfect system. Transplanting people into new bodies caused massive disorientation issues, and resulted in quite a lot of problems. Enter the Envoy. Envoys were sleeves engineered to withstand this "sleeve sickness," making them perfect for combat. These new models were used by Quellcrist Falconer. Her rebel group eventually became known as The Envoy.

Eventually, Takeshi and his sister Rei joined The Envoy, but the group was defeated by the United Nations Interstellar Protectorate. When Takeshi reawakened in Season 1, he was the only known living Envoy, and thus was dubbed the last Envoy. The name wasn't quite accurate, he was soon reunited with his sister, but Rei sold them out in the hope of survival, so Takeshi killed her.

While this term was used multiple times in Season 2, there's actually a mention of the moniker in Season 1. In episode 3, when Laurens Bancroft is throwing a rager for the who's who of the Meths, the super-rich class of people who can afford sleeves to lengthen their lives. During this party, Bancroft decides to show off his new acquisition to everyone, as The Last Envoy living would be the ultimate collectible.

Now with the alternate name The Last Envoy (even if he is far from the last one rebelling), Takeshi finds a legend forming around him. His reputation precedes him. Even though things seem dark at the end of this season, Takeshi's story is far from over.