"I have something far more interesting in mind for our little pets." 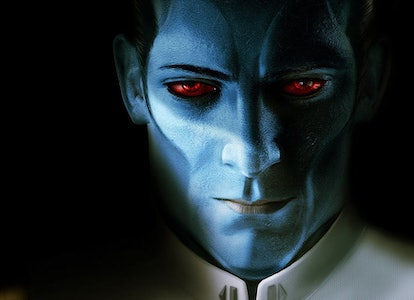 Dreams can come true. Ahsoka Tano's live-action appearance on The Mandalorian Season 2 was the culmination of years of fan-casting and speculation for Star Wars lovers. So Lucasfilm's announcement of the character's own Disney+ live-action series is just more delightful icing on the cake. The upcoming series is currently in development alongside eight more new Star Wars shows.

With so many stories and plots to develop, the creative minds behind Star Wars may be enticed to look back to the franchise's multimedia past — the non-canon elements of Star Wars lore known as Legends. Buried deep within that lore is a creature that could pose a major problem for Ahsoka as she continues her journey.

Timothy Zahn's iconic novel Heir to the Empire is often considered the centerpiece of the Legends novels. In it, Imperial strategic genius and art lover Grand Admiral Thrawn seeks out a species of strange, lizard-like creatures known as the ysalamiri in order to exploit their unique defense mechanism — they emit a "bubble" around them that allows them to repel the Force entirely.

The ysalamiri use this to evade their natural predators, the Force-sensitive vornskrs. For Thrawn, these creatures are key to leveling the playing field against Vader's heirs, Luke and Leia. Originally, this story was just an Extended Universe way of exploring the Force. These creatures were struck off canon by the Disney purchase of Lucasfilm back in 2012.

Thrawn's Chiss ways were so beloved by fans that Dave Filoni brought him back for Star Wars: Rebels, making the Legends character canon, but not the ysalamiri. The only currently official references to these lizards are in the art behind Thrawn as he's shown scheming.

It's not too late for these little reptiles, though.

With Ahsoka mentioning Thrawn in her Mandalorian appearance, it's safe to assume that's who she will face off against in her spinoff. There's only one problem. Ahsoka's Force-sensitive, and Thrawn is not. Not even the most genius of plans can replicate Force powers. Therefore, Thrawn could use the same tactic against Ahsoka, forcing her to face off against him using only her cunning.

A meeting of the minds between Ahsoka and Thrawn would definitely be another dream come true for countless Star Wars fans. As cool as Force powers are, they're not so cool when they make for a boring victory over a non-Force sensitive villain. The ysalamiri could be the great equalizer an Ahsoka vs. Thrawn conflict needs, and would provide an adorable creature with Grogu-levels of merch potential.

Of course, before any of this can happen, Ahsoka needs to track down Thrawn. But when she finds him, we're sure to have quite the fight on our hands, especially if the ysalamiri are involved.