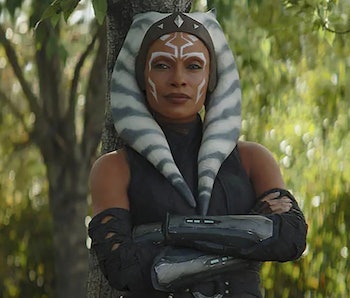 Ahsoka Tano’s live-action legacy is only just starting to build. After a surprise appearance in Season 2 of The Mandalorian, she also popped up alongside Luke Skywalker when The Book of Boba Fett took a departure to check in on young Grogu. Now we’re gearing up for Ahsoka, a spinoff show dedicated purely to her post-Return of the Jedi exploits and her search for Grand Admiral Thrawn.

A leak suggests we’ll see another familiar face in Ahsoka as well, and it’s one we saw only a few months ago in Obi-Wan Kenobi.

Making Star Wars, one of the internet’s most reputable Star Wars leakers, suggests that Ahsoka will include a duel between the former Jedi and her old master, some fellow named Darth Vader. However, it may not go down like you think.

The leak says we’ll see Ahsoka fight Vader “in more than one way.” Of course, we can’t have Ahsoka battling Darth Vader in the present, because Ahsoka takes place after Vader dies. But according to this leak, another actress will play a younger Ahsoka during flashbacks.

We could see a young Ahsoka training with Anakin before he defected, much like how we saw Obi-Wan and Anakin training in Obi-Wan Kenobi. According to the leak, the duel between Ahsoka and Darth Vader will require additional training for Hayden Christensen, meaning we’ll see his face for at least part of the battle.

However, there’s a far more exciting wrinkle to this idea. There’s been a long-rumored theory that Ahsoka will include scenes set in the World Between Worlds, the metaphysical plane we saw in Rebels. Considering the World Between Worlds exists outside of time, it’s possible we could see Darth Vader or Anakin Skywalker in one of the portals without it being a strict flashback.

Both these rumors prove there’s a better way to incorporate a classic character like Darth Vader than we’ve seen before. In Obi-Wan Kenobi, which was supposed to be the big rematch between Anakin and his former master, Vader was a secondary villain who felt included just so he could fight Obi-Wan. Ahsoka is poised to include Vader in a more integrated way, either as a flashback to the past or through the first live-action example of time travel in Star Wars.

There’s plenty to get excited about with Ahsoka, but a Darth Vader cameo (and rematch) would be a nice bonus. Whether through a flashback or a literal glimpse into the past, the conflict promises to be memorable.