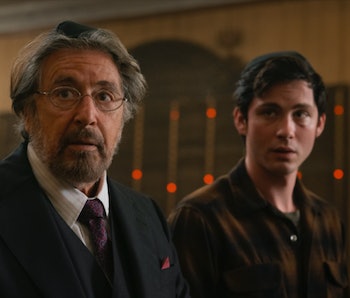 This article about Season 1 of the series Hunters was originally published on January 7, 2020 and updated on July 3, 2021 following the release of the season on Amazon Prime Video. Read on for the original article, with some new changes to reflect the latest updates on this topic.

Inspired by true events, Amazon’s original series Hunters — not to be confused with the Syfy show of the same name — is the television equivalent of punching Nazis in the face, not unlike what Quentin Tarantino gave us in Inglourious Basterds.

Originally titled The Hunt, the series was announced back in March 2018, and has flown under the radar for quite some time. But right out of the gate it had a strong team behind it, with Academy Award winner Jordan Peele, serving as executive producer and Hollywood icon Al Pacino in the leading role. The series was created by David Wail, who’s also executive producing alongside co-showrunner Nikki Toscano.

Here’s everything we know about Season 1 of Hunters.

When was the Hunters Season 1 release date?

Hunters debuted on Amazon on February 21, 2020. The first season consisted of ten episodes, all binge-able if you have an Amazon Prime account.

Who is in Hunters and which characters do they play?

Al Pacino, fresh off Martin Scorsese’s The Irishman, plays Meyer Offerman, a Holocaust survivor and the founder of The Hunters. Offerman is responsible for bringing a band of Nazi hunters together. Joining him in the hunt is Logan Lerman as Jonah Heidelbaum, whose grandmother was murdered by an unknown assailant. Offerman offers Jonah the chance for payback: “Best revenge is revenge,” he says.

The cast is rounded out by Josh Radnor as Lonny Flash, an actor moonlighting as a Nazi hunter, Kate Mulvany as Sister Harriet, Tiffany Boone as the street smart Roxy Jones, Louis Ozawa Changchie as Vietnam veteran Joe Torrance, and Carol Kane and Saul Rubinek as the married duo Mindy and Murray Markowitz.

What is the plot of Hunters about?

Hunters focuses on a skilled and covert team of hunters seeking out escaped, high-ranking Nazi officials living in New York in 1977. It’s a particularly urgent mission given that these vile people are actively conspiring to create a Fourth Reich within the United States. The Hunters are tasked with thwarting their plans for another genocide, before its too late.

“The show is many things,” David Wail told TV Insider in January. “It’s a coming-of-age tale, a historical drama and a vengeance thriller. Think of it as an Arthur Miller morality play imbued with overtones of a Frank Miller graphic novel.”

Wail says he inspired by the stories of his grandmother, who survived the Holocaust. “In my own way, Hunters is my pursuit of justice,” he explained.

Is there a trailer for Hunters yet?

A full-length trailer for the series was released. If you thought the show was going to stick to blood, violence, and drama, then you’re in for a surprise: Hunters is also full of dark comedy.

“We cannot know such evil until it strikes, so the time to strike is now before everything we hold dear to us is destroyed. This is not murder, this is mitzah. Welcome to The Hunt,” says Offerman.

How violent is Hunters?

Amazon’s gotten more ambitious with its original programming recently, showing a greater appetite for brutality. Hunters includes a lot of punching, kicking, blood, and explosions. At one point, Pacino’s character even stabs someone through the hand, so the series is definitely not for the faint of heart. However, the level of violence doesn’t surpass that of Amazon’s The Boys or Invincible and, beyond punching Nazis, there’s a good amount of time spent on the hunting and bonding between the team as well.

Was Hunters renewed for Season 2?

Yes! In August 2020, less than six months after the series debuted, Amazon officially renewed Hunters for a second season. “With Hunters, David Weil’s bold vision and fearless imagination powered a thrilling, twisty, action-packed first season that engaged Prime Video customers around the world,” said Jennifer Salke, Head of Amazon Studios, “We are thrilled that David, Jordan and the Hunters will be back with us for more.” Sounds like the Hunters have plenty of more Nazi hunting in their future.

Hunters is currently available to stream on Amazon Prime Video.