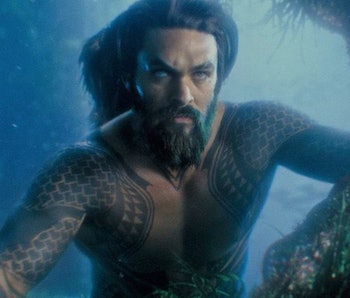 It’s time to take a dive. At one point, the most spectacular and frightening scene in all of Aquaman was getting its own movie. So what horrors lie beneath the ocean depths? Welcome to the Trench.

In February 2019, news first broke that Warner Bros., high off the success of 2018’s Aquaman, would produce a horror spin-off set in the same universe. Titled The Trench, the film was expected to explore the horrific sea creatures that chase Aquaman (Jason Momoa) and Mera (Amber Heard) in the second act of Aquaman. But the project was canceled a couple of years later, left in the shadows of the DCEU. Here’s everything we know about what The Trench could have been.

What was The Trench?

The Trench was a planned horror movie set in the DC cinematic universe, the first movie of its kind from Warner Bros. and DC Films. The film would feature the “Trench,” a name that refers to both the evil creatures and their dark kingdom in the Marianas Trench. In 2018’s Aquaman, they are the creatures who terrorize Arthur and Mera on their way to meet the leviathan, voiced by Julie Andrews.

Introduced in Aquaman #1 (2011), the Trench were inhabitants of Atlantis before it was destroyed and submerged underwater eons ago. The only ones to survive were the Atlanteans, the Xebelians (in the Bermuda Triangle), and the Trench, who dwelled in the Marianas Trench, where they evolved into carnivorous humanoids that resemble anglerfish with legs.

Who was supposed to write and direct The Trench?

Although Aquaman director James Wan is famously associated with horror, Wan would not have sat in the director’s chair for The Trench. There were no directors attached to the script at the time of the project’s cancellation. Writers Noah Gardner and Aidan Fitzgerald were drafting the script.

When was The Trench supposed to come out?

The Trench never got a premiere date. However, Peter Safran told The Hollywood Reporter back in 2019 that the movie would have come out before Aquaman 2, which was slated for December 16, 2022.

Is there a trailer for The Trench?

Given that the film is no longer happening, there are no trailers for The Trench. But you can always rewatch that scene from Aquaman.

What was The Trench plot going to be about? Where does it take place in the DC timeline?

Little is known about the actual plot of The Trench, but in an interview with The Hollywood Reporter, producer Peter Safran confirmed that the film would take place after Aquaman.

“We always, even from the early concept art days, loved the idea of a Trench movie,” Safran said. “Then, when audiences embraced it in the movie itself the way they did, particularly that ant farm shot where the camera follows the Trench following Arthur and Mera down into the deep, we just knew that we had something very special there and we knew what that movie should be.”

“More as a monster horror movie”

In a June 2019 interview with ComicBook.com, Wan said that The Trench would, as one might expect, look and feel more like a horror movie than a superhero movie. Wan described The Trench as a “monster horror,” a specific subgenre of horror that encompasses everything from Creature From the Black Lagoon to Jaws to Cloverfield. It’s as if the ocean is scary or something!

“We’re still deep in sort of crafting the script, crafting the story right now so I don’t want to get into that too much,” Wan said. “But definitely it’s one that I really want to lean into the horror of it. So it’s going to play more as a monster horror movie than it will as a superhero film.”

He then added, “But it’s still definitely part of the Aquaman world,” confirming that The Trench will still take place in the DC “Extended Universe,” even if Batman or Superman don’t bother making a fishy cameo.

When was The Trench canceled?

In April 2021, Warner Bros. and DC Films decided to clear some “legacy development titles” from their upcoming slate. Unfortunately, that included The Trench, alongside Ava DuVernay’s New Gods. In addition, sources say the studio considered the upcoming sequel Aquaman and the Lost Kingdom to be enough of a trip underwater not to necessitate the horror spinoff.

There’s no hard and fast reason why The Trench was canceled other than the studio cleaning house a bit. The DCEU is attempting to keep up with the Marvel Cinematic Universe, including planning out its films and releases for years down the line. Unfortunately, it seems that neither The Trench nor New Gods fit into the timeline for the near future. But just like the subject of the film, you never know when they may come crawling out of the deep and onto our screens.

Aquaman and the Lost Kingdom will release in theaters on December 16, 2022.