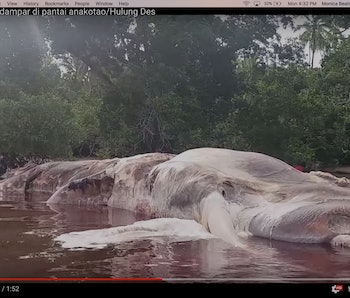 Last week an enormous, rotten carcass washed up on the shore of Indonesia’s Maluku islands, so far along in the stages of decomposition that nobody could figure out what kind of animal it was. At 50 feet long and with giant tusk-like bones, it looked like some sort of hellish sea monster.

Nope: It’s only a festering whale.

A baleen whale, more specifically — which isn’t actually that specific, since the baleen classification encompasses 15 species, including the blue whale, humpback, and bowhead whale. Scientists can’t identify it more precisely because it’s so rotten, but they were able to label it as a baleen based on its jaw bone, skull, and baleen plates, which filter food from the water.

It might be part of the rorqual family, Regina Asmutis-Silvia of the Whale and Dolphin Conservation charity told The Huffington Post, after identifying groove patterns on the carcass in some images. “Certain species of baleen whales (rorquals) have ‘ventral grooves’ which run from their chin to their belly button. It is stretchy tissue that expands when they feed,” she said. There are nine species of rorquals, the most common of which are the blue whale and fin whale.

So if it’s a whale, why doesn’t it look like one? Decomposition gases are causing the carcass to bloat into an irregular shape. The animal might be missing its outer skin from sharks stripping it away. It’s possible that the warm Indonesian waters are causing the whale to decay especially fast.

At first, folks were speculating that the remains belonged to a giant squid because some of the blubber looked like tentacles, but that was never really plausible because the carcass has bones (squids don’t).

Locals are now trying to figure out what to do with the body. They’re not the only ones with a whale carcass problem: humpback whales have been dying along the Atlantic Ocean coast in huge numbers this year, and marine biologists aren’t yet sure why.

Indonesia may not be the home of a real-life sea monster, but hey, it’s still the home of dragons.

More like this
Science
21 hours ago
Artemis SLS on the launchpad and more: Understand the world through 7 images
By Robin Bea
Science
8.17.2022 6:00 PM
Watch squealing dolphins hunt fish and snakes from their point of view
By Jennifer Walter
Science
8.17.2022 11:00 AM
These fish don’t just make antifreeze — they bleed it
By Elana Spivack
Related Tags
Share: