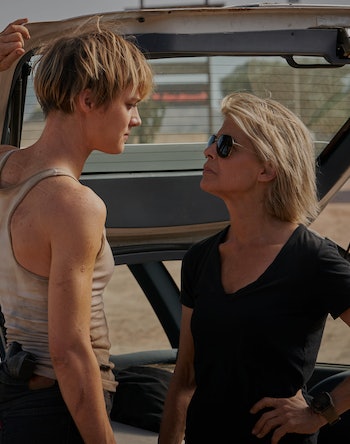 A lot about Terminator: Dark Fate is going to feel familiar. Sure, it’s still essentially a dystopian story about murder-robots, but unlike the last three Terminator movies that rehashed the same narrative, Dark Fate actually surprises. It thrills. It even has lovable heroes and laughs.

In Dark Fate, an augmented human soldier from the future named Grace (Mackenzie Davis) is sent back in time to protect young Dani Ramos (Natalia Reyes) from a robot assassin also sent through time. With the help of some surprise allies, the two attempt to survive against a unstoppable killing machine called Rev-9 played by Gabriel Luna.

Terminator 2: Judgment Day (1991) established this procedural approach: the underdog good guy follows a more powerful assassin back in time to battle over the survival of a person who’ll be really important one day — or they’ll give birth to someone who’s really important.

Dark Fate celebrates a version of this same approach, but there are enough twists that transform it into an exciting exercise in cinematic revisionist history. Dark Fate covers over the shortcomings of Terminator 3: Rise of the Machines (2003), Terminator Salvation (2009), and Terminator Genisys (2015), by erasing them from the timeline.

Since Dark Fate only uses the events of 1984’s Terminator and Judgment Day, here’s a brief recap: In Terminator, Arnold Schwarzenegger’s Terminator tried to kill Sarah Conner before she gave birth to her son, John Connor, the future leader. She falls in love with her protector from the future, Kyle Reese, who is John’s father. In Terminator 2: Judgment Day, Sarah teams up with a reprogrammed Arnold Terminator who protects her teenage son from an advanced Terminator made of liquid metal. The opening scenes of Dark Fate are a direct follow-up to these events.

Dark Fate has a firm grasp on how all of this time travel creates alternate timelines. The events of T2 didn’t stop judgment day, but pushed it years into the future, so when it’s about to happen, the killer machines have that much more in upgrades behind them. Things get expectedly hairy.

Linda Hamilton returns to her role as the badass Sarah Connor, nearly 30 years later, and she’s been hunting every Terminator that emerges from the future to wreak havoc on the present. When she gets caught up in the central conflict of Grace and Dani vs. the Rev-9, it’s a legit thrill to see the trio of women team up against their enemy.

Grace is perhaps the most badass hero these movies have ever seen — even tougher than Arnold in T2 — and Mackenzie Davis brings an earnestness to the role that is nothing short of exhilarating.

Whereas most iterations of Arnold’s Terminator present him as a hulking bruiser crushing enemies with brute strength, Grace is just as strong — but with superhuman speed and reflexes. She can beat anything in one-on-one combat at the cost of an extreme metabolism that threatens to destroy her during breaks in the action.

The future is female in Terminator: Dark Fate, which could very well annoy “traditionalists,” or just dudes who are very online. Things get even more progressive when the film takes on immigration in an indictment of President Donald Trump’s policies. Dani is essentially “the new John Connor” — the teenager in T2 — and her status as a Mexican woman is handled in realistic ways. (Her extended family is embroiled in the immigrant crisis, and an uncle helps their group try to make it across the border.) None of the politics feel forced, but Dark Fate doesn’t sidestep criticism of nationalism, and it’s done in a way that many people won’t like.

In one standout scene, the women are captured trying to cross the border into the United States. Grace asks a female guard where the “prisoners” are kept. The guard corrects her, calling them “detainees” as she grows defensive. “WHERE ARE THE PRISONERS!?” Grace screams. When the guard answers the question, it feels like an admission of guilt.

Schwarzenegger also returns in Dark Fate, supplanting his formerly merciless killing machine with a more humanized version of his sorta-compassionate T2 self. He’s unlike any other Terminator we’ve seen before, steals some of the film’s best laughs, and serves as an ally to the three women in their adventure. To give much more away would spoil some of the brightest moments in Dark Fate, but Schwarzenegger’s character subverts your expectations for the franchise for the better.

Dark Fate was never going to be as groundbreaking as Terminator 2, but by focusing on endearing characters, exploring exciting new Terminator abilities, and devoting time to moments of levity, the end product is more inspiring and uplifting than T2 could have been. To some people, myself included, that makes it a better movie than any from the franchise that have come before it. Because at the end of Dark Fate when the apocalypse still feels imminent, at least we feel like there’s hope for humanity.

Terminator: Dark Fate will be released in theaters November 1, 2019.