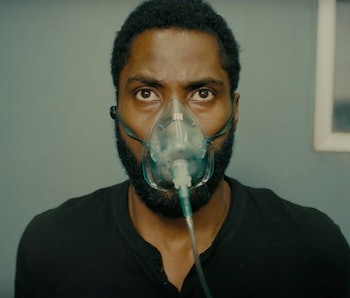 This article about the film Tenet was originally published on December 19, 2019 and updated on June 29, 2021 following the movie's release. Read on for the original article, with some new changes to reflect the latest updates on this topic.

Back in 2010, Christopher Nolan challenged us with our understanding of dreams. And in 2020, the famed director unmade reality again, this time with an espionage story that borders between the living and the dead called Tenet.

One of the first movies to hit theaters in 2020, Nolan’s newest film Tenet was another science-fiction/action hybrid — and another demonstration of Nolan’s taste of sharp-dressed subversions of conventional Hollywood genres. Here’s everything we know about Tenet.

When did Tenet release in theaters?

Tenet was originally scheduled to release in theaters on July 17, 2020. But the spread of the COVID-19 pandemic prompted Warner Bros. to delay the release date multiple times, finally settling on August 26 internationally and September 3 in the United States. Tenet is notable for being the first Hollywood “tent-to-pole” film to launch in theaters in the midst of the pandemic. Its release was not without controversy, as some protested the studio’s choice not to put the movie on HBO Max, as it had planned to do with other big 2020 films.

Where can I watch the trailer for Tenet?

You can watch the trailer for Tenet in the embed below.

What is the plot of Tenet about?

Tenet is described as “an action thriller taking place in the world of espionage.” A CIA agent simply known as the “Protagonist” is recruited by the titular organization. His mission is to stop a Russian oligarch who has been converting weapons using “inverted” entropy, allowing them to travel backward through time. The Protagonist is assisted in his journey by his handler Neil and the oligarch’s estranged wife.

Who stars in the cast of Tenet?

Tenet boasts an all-star cast full of Nolan-verse newcomers and veterans. It stars John David Washington of Ballers and BlackkKlansman. The film also stars soon-to-be Batman Robert Pattinson and Elizabeth Debicki (Widows and Guardians of the Galaxy, Vol. 2). Regular Nolan collaborators Michael Caine and Kenneth Branagh round out the cast.

How did Tenet do at the box office?

Tenet grossed $58.5 million in the United States and Canada, and $305.2 million in other territories, for a worldwide total of $363.7 million. Though the film was Christopher Nolan’s most expensive project to date, it was unable to break even due to its choice to open exclusively in theaters during the height of the pandemic.

What did critics have to say about Tenet?

Tenet has a 70% rating on Rotten Tomatoes, a score of 69 on Metacritic, and a B on CinemaScore. The movie earned much praise for its time-bending take on a James Bond story, as well as the spectacle Nolan’s direction brings.

Tenet was released in theaters on September 3, 2020.

More like this
Culture
7.29.2022 11:30 AM
You need to watch Christopher Nolan’s weirdest sci-fi thriller before it leaves HBO Max this week
By Alex Welch
Culture
8.10.2022 11:30 AM
10 years ago, Jeremy Renner ruined the best spy-thriller franchise of the century
By Adrian Manuel
Entertainment
8.4.2022 2:42 PM
Joker 2 release date, cast, plot, and more for the Todd Phillips DC sequel
By Gabrielle Bondi and Dais Johnston