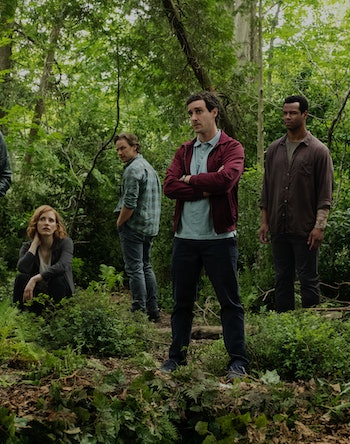 The beloved cast of kids who comprised the Losers’ Club in the It: Chapter One looms large in director Andy Muschietti’s Chapter Two, a follow-up that takes place 27 years later.

The adult cast that includes Jessica Chastain, James McAvoy, and Bill Hader take center stage, but the teenaged actors from the 2017 movie return for a slew of flashbacks that distort instead of clarify the conflict. It dissolves whatever narrative momentum may have been there, leaving a sometimes incoherent film. It: Chapter Two is still frightening and funny, but unfortunately, forgettable, because of what’s lost in this back-and-forth.

When the Losers go adulting in Derry, Maine to murder a clown demon, it thing feels inconsistent and frustrating. But at least the nightmare monsters are twisted and silly, and the lighter comedic moments are more devilishly wicked than Pennywise’s cackle.

Chapter Two tries to do too much with an already too-long a runtime of 2 hours, 47 minutes. All of the Losers have left Derry, Maine to achieve fame and fortune. The dark magic of It made them all forget about their horrific, shared trauma. Because Mike Hanlon stuck around in Derry as a caretaker, of sorts, he kept his memories and waited for It’s next “cycle” to start, studying the ancient culture of local Native Americans whose magic may or may not help kill It for good.

Mike calls all the adult Losers one by one to bring them back to Derry for an unsettling reunion after clownish murders pick up yet again in the town. Seeing the Losers reconnect over a meal in a restaurant is really fun for anyone who misses their old friends (aka everybody), and the film’s energy in these earlier parts is infectious. But things go off the rails when fortune cookies transform into tiny monsters like a half-bat, a baby-faced spider, and a wriggling eyeball squid.

What’s an illusion? What can hurt the Losers? It: Chapter Two can’t decide, and it’s endlessly frustrating.

Chapter Two involves a series of vignette-like trips down memory lane so that each Loser can reclaim and later sacrifice a personal artifact as part of something called the Ritual of Chud that … doesn’t work at all?

Spoiler: They do eventually win … but you’d know that with one look at the promotional materials that proudly say “It Ends.”

Therein lies the burden of a movie like this one, spun out of a famous Stephen King story already adapted into a TV mini-series 29 years ago. If people haven’t seen or read this story already, they likely have a friend who has told them It’s not actually a clown at all, but a transdimension being that’s essentially a god. Maybe they even compared It to that weird Turtle in Stephen King’s multiverse. Most know what’s going to happen, so there’s not much suspense. And suspense is everything in horror.

It is strongest when the mystery is preserved, long before we get the clarity and closure of a happy ending, which is why Chapter One is such a knockout and Chapter Two feels doomed from the start.

King’s greatest weakness as a storyteller is his propensity to over-explain and tidily end stories. Millions adore his mythos, but as the complexity of his multiverse increases, it approaches incoherence. If Lovecraft marveled at the insanity and vastness of the universe, then King worships at an encyclopedic altar of inanity.

King is famously bad at writing an end to a story. He knows this, which is why he has a cameo in Chapter Two in which he drags James McAvoy’s adult Bill Denbrough, a famous author and screenwriter, for not being able to write a decent ending.

There’s something relatable about seeing children confront a literal nightmare, which is what made Chapter One’s stakes so thrilling. As a kid, imagination and fear blur more easily. So when the Losers go adulting in Chapter Two the film struggles to define the stakes or the scope of this monster’s powers — despite several noteworthy performances from the top-billed cast.

In Part One, the Losers couldn’t separate terrifying illusion from reality because they were dumb, scared kids. That’s what made it so fun. The grave threat that It presented felt that much more legitimate.

That tension evaporates when the Losers go adulting and tell us over and over again what’s an illusion and what’s real. The Losers cut through all the bullshit as adults, and Chapter Two really suffers for it.

As each Loser reclaims lost memories from the summer that followed their first confrontation with It as kids, they’re again plagued by dark illusions. They make it out by chanting “This isn’t real! This isn’t real!” And yet, in the opening scene of the movie, Pennywise takes a huge bite out of a man’s shoulder. In the middle of the movie, he devours a young girl under some bleachers. Near the end of the movie, he swallows a little boy whole inside a hall of mirrors at the carnival.

Why does It: Chapter Two clown around like this? All this is to say nothing about the zombie that can break into a psychiatric ward undetected and then teleport outside to drive the getaway car. (Don’t ask — it involves mullets!)

Chapter Two does have a lot going for it. There are many laugh-out-loud moments, thanks mostly to Bill Hader, who steals the show. His insecure, anxious, and foul-mouthed adult Richie Tozier simultaneously channels Finn Wolfhard’s version of the character while elevating it to place with genuine depth and pathos.

As far as jump scares and creature design go, Chapter Two is a delight that’s uproariously funny at its best. At its worst, it feels like a hollow try-hard piece of violent sci-fi.

If the Losers can can become bigger and meaner bullies than the people who bullied them — instead of, I don’t know, being kinder — they might be able to defeat It in Chapter Two.

When will we start asking why?

It: Chapter Two will be released in theaters September 6, 2019.