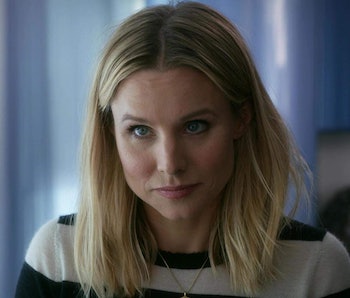 This article about Season 5 of the series Veronica Mars was originally published on July 24, 2019, and updated on June 1, 2021 following the cancellation of the series. Read on for the original article, with some new changes to reflect the latest updates on this topic.

Veronica Mars has returned for Season 4 on Hulu. It’s been a hot minute since we last saw Veronica in a fan-funded Veronica Mars movie released in 2014. Season 4 picks up where the Rob Thomas-created series ended with that film, catching up with Veronica as she continues her work as a private investigator in her hometown of Neptune, California.

Season 4 focused mostly on a serious mystery that reeled Veronica and Keith Mars in on the first episode. A major bombing at the Sea Sprite Motel in Neptune sets Mars Investigations on a dangerous path as the father-daughter duo looks into who could have done it. As Veronica and Keith dig deeper, they realize the bombings have ties to local politicians and community bigwigs invested in revitalizing Neptune — much against the rest of the town’s will. Add to this a hefty dose of relationship strife between Veronica and her longtime beau, Logan, and Veronica Mars Season 4 was packed with more drama than we anticipated.

Unfortunately, Veronica Mars was canceled after that, meaning there’s no Season 5 on the horizon. But here’s what we could have expected from the series.

Was Veronica Mars renewed for Season 5?

Unfortunately, Veronica Mars’ revival appears to have been short-lived. In November 2019, Rob Thomas told TVLine that there have been no discussions with Hulu about a fifth season. That being said, never count out the creativity of Thomas, Bell, and the “Marshmallow” fans. After all, it was a crowdfunding effort to get the movie produced, which led to a pickup for Season 4. Unfortunately, it just looks like Hulu will not be the home for a Season5 if it happens.

Despite that, while speaking with Entertainment Weekly, Thomas stated his intention to keep the Veronica Mars train running for seasons to come. In sharing his reasoning behind killing Logan (Jason Dohring) off, Thomas said, “Well, here’s the thing: I want to keep making Veronica Mars. Kristen and I have talked about making them until it’s Murder She Wrote, and I think for the show to work that way it has to work as a noir detective show,” before explaining why Logan had to die for that to work.

Which Veronica Mars cast members would have returned?

We know for sure that Jason Dohring, who played Logan Echolls, and David Starzyk, who played Richard “Big Dick” Casablancas, wouldn’t have returned since their characters were killed during Season 4. Outside of this, any Veronica Mars cast member could have come back.

The likeliest returning cast members would have been Kristen Bell and Enrico Colantoni as Veronica and Keith Mars. Izabela Vidovic would also have likely returned to play Matty Ross, the daughter of the Sea Sprite Motel owner killed in the Neptune bombings, who now works for Mars Investigations. It also seems the door would be wide open for any previous Veronica Mars alum to show up for a little while. Season 4 included appearances from past cast members Max Greenfield as Leo D’Amato, Percy Daggs III as Wallace Fennel, and Francis Capra as Weevil.

How did Veronica Mars Season 4 end?

Veronica Mars Season 4 ended with a literal — and devastating — bang. Veronica nailed down Cho’s Pizza deliveryman Penn Epner as the mastermind behind the Neptune bombings. Believing she had watched him diffuse the final bomb, Veronica and Logan got married at Neptune City Hall. Later that day, the pair returned home as Veronica chewed over a final riddle about another suspected bomb Penn may have planted. As she figured out the bomb was planted in her own car, she went to warn Logan, who had gone out to the car to move it, and watched as Logan died in the explosion.

Season 4 ended with Veronica even more emotionally shut down as she processed the loss of her husband and tried to move on with her life. It was revealed she was finally going to therapy (something Logan had encouraged her to do all season) and was going to continue to help her dad with Mars Investigations. Business grew as word of the Neptune bombings spread across the US, which meant cases came in from across the country. Looking for a reason to escape Neptune, Veronica went out on the road to solve them on behalf of Mars Investigations.

What questions were never answered on Veronica Mars?

Season 5 would have had a lot of big questions to answer, but the most pressing would be how Veronica chooses to heal from the loss of Logan. Would she become even colder and cut off from the world? Or would she embrace the healing offered in her initial therapy sessions and try a different way of seeing the world?

There’s also the question of whether Matty Ross, still in Neptune and set up to be Veronica’s P.I. successor, would take up the mantle and continue investigating the shady dealings within the city limits. Even though Neptune’s businesses and real estate market have gone more upscale, there would surely be no shortage of crimes being committed. With Matty now working at Mars Investigations, she had all the tools she needs to solve them.

Other minor questions Season 5 would need to deal with include: Who is Keith’s new girlfriend? Is she someone we know or a new character with the potential to shake things up? Will more crime surface in Neptune with Veronica gone? Will Veronica find love again?

What would the plot of Veronica Mars Season 5 have been?

The plot of Veronica Mars Season 5 would have most likely focused on Veronica as she takes on new cases across the country on behalf of Mars Investigations. One key tease in the Season 4 finale was that news of the Neptune bombings had spread across the nation, and the Mars family got a large influx of requests.

Veronica Mars Seasons 1-4 are available to stream now on Hulu.