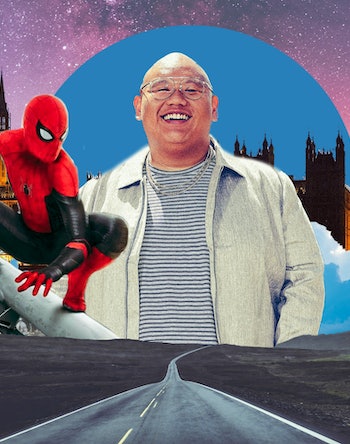 The first time Jacob Batalon realized he’d made it as an actor wasn’t when he saw himself on-screen in Spider-Man: Homecoming. For the Hawaiian actor, it was a few weeks earlier, during the South Korean leg of the Marvel movie’s press tour, when an excited fan handed him a box of rare cereal.

“Two years ago, someone in South Korea gave me some Oreo O’s, and I was genuinely shocked,” Batalon tells Inverse. “I hadn’t seen that cereal since I was, like, 7, and they just go, ‘Here, take my cereal.’” (Oreo O’s were discontinued in 2007 and only returned to stores 10 years later, except in South Korea, where it never went away.)Spider

That moment stands out among a sea of selfies, autographs, and birthday video messages he’s recorded for fans — even two years later, as a more confident Batalon prepares to show the world a new side of his Marvel character.

In Far From Home, Spider-Man’s best friend, Ned Leeds, takes on an even larger role, thanks to a newly developed relationship with his romantic interest, Betty (Angourie Rice, Black Mirror). This may come as a shock to fans, and it’s played for laughs throughout the movie, but for Batalon, it’s a natural progression for his character.

“Ned is just undeterred,” Batalon says. “His best friend is Spider-Man, you know what I mean? He feels like he can take on the world.”

Dorky and cherubic, the Marvel Cinematic Universe adaptation of Ned Leeds has always seemed more confident than he should be. That unearned swagger serves as a counterpoint to Tom Holland’s portrayal of Peter Parker, an awkward teen dealing with superpowers the way a normal kids handles puberty, but 20 minutes on the phone with Batalon is enough to confirm that this confidence comes as much from the actor as it does the screenwriters or director of the latest Spider-Man movies.

Batalon’s calling from London, where he’s in the middle of a press tour and running almost an hour late. But despite the circumstances, I can practically see his smile shining through my iPhone screen when I receive his call. He greets me with a cheery, “Hey man, what’s going on?” before opening up about life on the road with Tom Holland, the future of his career beyond Marvel, and why he thinks the movie industry has already made progress towards diversity and inclusivity.

Born to Filipino parents in Honolulu, Hawaii (his Instagram handle is still @lifeisaloha), Batalon attended Catholic school before enrolling at a local community college to study music theory. But it didn’t stick.

“I didn’t really enjoy school in general,” Batalon told IndieWire in 2017. “I dropped out of college in Hawaii, just because I thought school was for losers. But school’s really important.”

From there, Batalon set his sights on acting and teamed up with a Hollywood agency that happened to be scouting in Hawaii. His agent, Jason Cunningham, pushed him to hone his craft in New York, where he developed a “respect for the art.” Then, Marvel and Sony came calling.

Spider-Man: Far From Home was actually Batalon’s first audition ever, though, at the time, he didn’t even know it was for a Spider-Man movie. The casting call described a supporting character in a Marvel film who could play a teenager (race and body type didn’t matter). Batalon submitted a tape, and before he knew it, he was being flown out to California to do screen tests with Holland.

“It’s just so frustrating doing the interviews with him, seriously.”

Jacob and Tom clicked almost instantly. The two actors became fast friends, and even roommates at one point. Batalon’s also resisted the urge to step in when Holland drops movie spoilers in interviews, something the Spider-Man actor does so frequently, it’s caused Marvel to clamp down on how much he knows about the plot of his own movies.

“It’s just so frustrating doing the interviews with him, seriously,” Batalon tells Inverse.

“It’s easy to just tell interviewers ‘no’ and say, ‘next question,’ because there’s obviously nothing I can say about those things,” he continues. “And you know, sometimes people just try to trick you into saying things, but the reality is just that I can’t say shit.”

To be fair, it’s a little easier for Batalon, who admits that his roles in the crossover Avengers films have been so small he doesn’t even need to know the rest of the plot. “They’re basically just cameos,” he says.

When I ask if he’s ever considered coaching his co-star on how to handle those types of questions, Batalon says it’s just not worth it. He spends enough time lecturing Holland on other topics already, though these aren’t one-sided conversations.

“I lecture him every day about things,” Batalon says. “I don’t want to lecture him about that too, when I feel like it’s something that he needs to know by now. Instead, we talk about life, his bad decisions, my bad decisions. We really give each other a lot of advice.”

In Spider-Man: Far From Home, Batalon takes on a new challenge: romantic comedy. When the movie begins, Ned is looking forward to traveling through Europe with his friend Peter (and the rest of their high school class) as a couple of bachelors even though Holland’s Spider-Man is determined to kiss MJ (Zendaya) at the top of the Eiffel Tower. But in a comical plot twist, Ned falls in love with his classmate Betty (Angourie Rice) by the time their plane lands in Venice.

The relationship is mostly played for laughs. It’s a way to complicate Ned’s devotion to his role as Spider-Man’s “guy-in-the-chair.” Rice’s character never gets much depth or motivation of her own, though she does great work with the minimal role she gets. “She was really, really talented and just insanely intelligent,” Batalon says.

The character development in their on-screen relationship is mostly devoted to Batalon, who goes from an immature teen to a devoted boyfriend in the span of a trans-Atlantic flight. All of a sudden, Ned is lecturing Peter on respecting women, giving the movie an unexpected message even while its cast is still dominated by dudes.

In his personal life, Batalon says he strives to be a feminist like Ned even when he’s not sure exactly what that means in 2019.

“I don’t know the difference between being a feminist or being an ally or just being respectful of other people,” he says. “I think that ultimately wanting to support women is embedded in the idea that equality is for everyone, and I believe that all the time. I fully support women in their endeavors and their rights.”

But in public life, both online and in interviews, Batalon tries to keep his personal opinions private. Maybe that will change as he matures, eventually catching up with his Marvel character. In the meantime, he’s more interested in talking about animals and perks up when I ask if he has any pets.

Tom Holland’s contract with Marvel and Sony covers at least one more movie, and that means we’ll almost definitely see Batalon again in the role of Ned Leeds. Beyond that, the future appears wide open for the Hawaiian actor. But when I ask what’s next, he deflects. Maybe that’s just his Marvel anti-spoiler training, or maybe he’s still figuring things out. Regardless, here’s what Batalon is willing to reveal about his next non-Marvel role:

“Um, something along the lines of Crazy, Stupid, Love.”

Within the Disney empire, Batalon seems perfectly suited for one other franchise: Star Wars. A self-professed superfan, his pick for favorite Star Wars movie is, somewhat controversially, Rogue One.

“It was a really dynamic film,” he says. “There was no Jedi, there was no Sith — except for the end where Darth Vader goes off, which was really crazy — but they still made the story compelling, and that’s what really made it good.”

Casting himself in a future Star Wars movie, Batalon doesn’t hold back.

“I want to be a Sith lord,” he says. “It sounds so fun. I mean, being a good guy is really cool and everything, but being evil just speaks to me on a different level.”

Batalon’s expressed an interest in playing a villain before. In 2017, he told Inverse he’d like to see his character transform into the classic Spider-Man villain Hobgoblin (In the comics, an earlier version of Ned Leeds did indeed become a supervillain.) He sees villainy as a new challenge, and it doesn’t hurt that there’s no lack of roles for supervillains in Hollywood today.

“It will definitely make me stretch myself as an actor,” he says. “Creatively and mentally, I think I feel like it would benefit me.”

For Batalon, the fact that it’s even conceivable he could be cast as Spider-Man’s best friend, let alone the lead villain in some future Star Wars movie, speaks to how far the industry has come. So when I ask what needs to change in Hollywood in the next 10 years, he replies that we’re already on the right trajectory.

“I don’t think I want to change anything,” Batalon says. “I mean, if I were to change anything, I would have changed things in the past, you know, to make it, to make it a more progressive place, but it’s moving in the right direction. It’s becoming a lot more inclusive to minorities as opposed to just being puffed-up Hollywood dreams of these good-looking people.”

Looking at Hollywood in 2019, there are still plenty of problems, but for Batalon, there’s even more to be excited about.

“There’s more in-depth stories that are being made about people from all walks of life, and that’s probably the most important part. I believe that’s where it’s going to be in 10 years. It’s going to be so much more exciting and inventive that way, because there’ll be more stories to tell.”

Jacob Batalon is an actor living in New York. He stars in Spider-Man: Far From Home as Peter Parker’s best friend, Ned Leeds, and is a member of the Inverse Future 50.