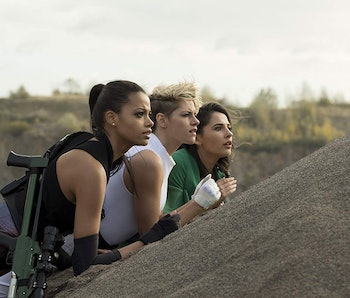 This article about the film Charlie’s Angels was originally published on June 27, 2019 and updated on May 27, 2021 following the movie's release. Read on for the original article, with some new changes to reflect the latest updates on this topic.

On Thanksgiving 2019, three angels tried to take the box office. Arriving in a blaze of glory was a new installment of Charlie’s Angels, directed by Elizabeth Banks and starring Kristen Stewart, Naomi Scott (of Aladdin and Power Rangers fame), and newcomer Ella Balinska.

Charlie’s Angels has been around since 1976 when it debuted as a TV series starring Farrah Fawcett, Kate Jackson, and Jaclyn Smith. The series ran for five years, ending with 110 episodes to its name. By 2000, it seemed time to reboot the franchise into a feature-length film featuring Drew Barrymore, Cameron Diaz, and Lucy Liu. The trio stuck around for a sequel, Charlie’s Angels: Full Throttle.

It definitely feels like it’s time to introduce the Angels of Townsend Agency to a whole new generation. Let’s take a look at everything we know about the Charlie’s Angels 2019 reboot.

When did Charlie’s Angels (2019) release in theaters?

Who is the director of Charlie’s Angels?

That would be none other than Elizabeth Banks, who also stars in Charlie’s Angels as one of many Bosleys (more on that in a sec). This is Banks’ second time directing a feature-length film, her first go being Pitch Perfect 2 in 2015. Previous to that, Banks cut her teeth directing one of many segments in the admittedly dire Movie 43 in 2013, as well as two short films, Just a Little Heart Attack and AIDS: We Did It!.

The first full-length trailer for Charlie’s Angels landed in everyone’s laps on the morning of Thursday, June 27, 2019. You can watch below as the trailer introduces you to each of the new angels (played by Stewart, Scott, and Balinska), the many Bosleys (Banks, Patrick Stewart, and Djimon Hounsou), and the villain (that’d be Jonathan Tucker).

Like many a Charlie’s Angels plot, the gist of this latest mission for the Townsend Agency’s finest is just intense enough to warrant getting involved and using all manner of disguises, spy tech, and feminine wiles to get the job done. It’s also vague enough that you’re kinda left thinking, “Wait, explain that again?”

As explained in the trailer: Elena (Scott) is the lead developer on a program for a prestigious power company that could revolutionize the industry but apparently, if it falls into the wrong hands it could spell trouble for everyone. Elena calls on the Townsend Agency to protect her and find out who is after the program. With Elena as our audience surrogate, we’re drawn into the world of Charlie’s Angels, where the agents who work for the enigmatic Charles Townsend do all the work that regular law enforcement just isn’t equipped to handle.

I kid you not, this cast is wild. It includes:

So, is this a reboot? A spinoff? A prequel?!

Banks confirmed in an in-depth feature with EW about Charlie’s Angels, she confirmed her film would be “a continuation” of the franchise and would recognize previous installments as canon. Banks also helpfully explained why the Townsend Agency is still operational today: “If you were rich in 1976, you only got richer. Charles Townsend is richer than ever, so he’s grown the business into a global spy agency.”

Wait, how many Bosleys are there?

While on Jimmy Kimmel Live in May, Banks also explained why the heck there were multiple Bosleys involved in her film when there’s only ever been one Bosley on duty in past Charlie’s Angels movies and the TV series.

“We have multiple Bosley’s in the movie. We take the entire historical context of Charlie’s Angels, which was founded by Charles Townsend in the 70′s, and we treat it all as canon and we bring it all into this movie. The only character that had the same name the whole time, but was played by different actors in all the iterations, was Bosley. So I thought why don’t we make that a rank instead of like the actual character name. So like I’m a Bosley, Patrick Stewart‘s a Bosley and Djimon Hounsou. We’re still the handlers.”

Essentially, more Bosleys are better than none and at the end of the day, who’s looking out for Charlie’s Angels? If anything, it has to be what is surely a holy Bosley trinity in the form of Banks, Stewart, and Hounsou.

Did any Charlie’s Angels alums have cameos?

One previous Angel did make an appearance in the new film. Kelly Garrett made a cameo, reprising her role from the original television series; she had done the same thing in Charlie’s Angels: Full Throttle. The other alumna, including Kate Jackson, Farrah Fawcett, Cheryl Ladd, Cameron Diaz, Drew Barrymore, and Lucy Liu also appeared via still photos in the background of Towsend’s L.A. office.

How did Charlie’s Angels do at the box office?

Charlie's Angels grossed $17.8 million in the United States and Canada, and $55.5 million in other territories, for a worldwide total of $73.3 million. Many publications called it one of the biggest box office bombs in 2019.

What did critics have to say about Charlie’s Angels?

Charlie’s Angels has an 52% rating on Rotten Tomatoes, a score of 52 on Metacritic, and a B+ on CinemaScore. The movie earned praise for its three leads, particularly Kristen Stewart. But criticism was reserved for the more “formulaic” and overly complicated main plot.

This article was originally published on June 27, 2019