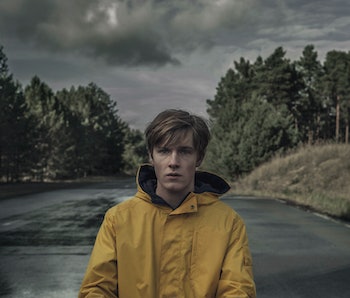 This article about Season 3 of the series Dark was originally published on June 24, 2019 and updated on May 24, 2021 following the release of the season on Netflix. Read on for the original article, with some new changes to reflect the latest updates on this topic.

Netflix’s twisty German-language sci-fi series Dark took viewers to multiple time periods; introduced the villainous time-traveling crusaders known as Sic Mundus; and wove together the stories of various characters to not only make this story about time travel even more complex than it already was, but to also make it evident that fans still have no idea exactly how everything is connected. Maybe Dark Season 3 will finally clear everything up?

Dark takes place in the rural town of Winden, Germany, an industrial town whose residents are born, live, and frequently die there. The series focuses on four families in particular — the Nielsens, the Kahnwalds, the Dopplers, and the Tiedemanns — and spotlights multiple generations of each family over the course of a century. The action begins when multiple children go missing in present-day Winden, causing a handful of characters, including series protagonist Jonas Kahnwald, to investigate where the children went and why it’s been happening. As each of the characters probes further to discover the truth, revelations about the nature of time travel and just how deeply each person’s fate is entwined with Winden’s fate come to the surface. By the end of Season 2, every character is faced with an impending nuclear apocalypse that threatens to stop them all in their tracks.

Here’s everything we know about the third (and final) season of Dark.

Was Dark Season 3 its final season?

Yes. Netflix officially renewed the series on May 30, 2019, before Season 2 even released. But the streaming service also confirmed that Season 3 would be its last.

When did Dark Season 3 film?

Dark series creator Baran bo Odar confirmed on his Instagram on May 30 that production on Season 3 had begun. Odar shared a photo of the title page from a Dark Season 3 script, writing in the captions that filming would take place over four weeks, meaning filming would finish the first week of July 2019.

He also commemorated the first day of Season 3 filming, which took place on June 1, by sharing a photo of the crew at various shooting locations, including the well-established location of the Winden cave entrance regularly shown in Dark.

When was the Dark Season 3 release date?

Is there a trailer for Dark Season 3?

Yes! Netflix released the official trailer for the final season of Dark on June 12, 2020.

How many episodes did Dark Season 3 Have?

Dark Season 3 had 8 episodes. That is the same number as Season 2.

Who returned for Dark Season 3?

Let’s be real, this is a show about time travel, and it’s been established that it’s possible for characters who have been killed at one point in time to still reappear in another time. That means no actors are officially out of the series because characters can resurface in any capacity necessary to tell the story.

That being said, here is everyone from the main cast who returned for Season 3 of Dark:

How did Dark Season 2 end?

So. Much. Happens. At. The. End. Of. Dark Season 2. The Season 2 finale sets up a few key storylines for Season 3, so we’ll break them down to make it a bit more digestible. Just keep in mind that all of the following events happen simultaneously and are happening with a nuclear apocalypse about to go down.

What time periods were covered in Dark Season 3?

Dark Season 3 continued to widen the time periods covered by the sci-fi series. The final season spanned from 1888 all the way to 2053. Every episode featured some mash-up of the various time periods across various characters (or at least versions of them).

How can I watch Dark Season 3?

You can watch Dark Season 3, as well as Seasons 1 and 2, on Netflix.