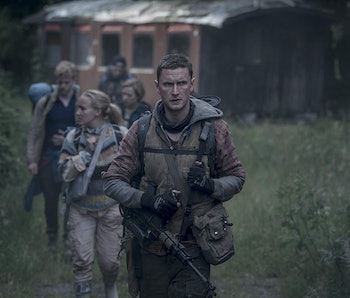 This article about Season 3 of the series The Rain was originally published on May 25, 2019 and updated on June 18, 2021 following the release of the season on Netflix. Read on for the original article, with some new changes to reflect the latest updates on this topic.

Netflix’s obsession with serialized science fiction isn’t limited to English-language shows like Stranger Things, Altered Carbon, and Maniac. The streaming giants have done an impressive job introducing viewers to foreign series like the German time travel thriller Dark and Danish post-apocalypse series The Rain, which released its third and final season in August 2020.

The Rain follows a group of survivors in Denmark who managed to avoid falling victim to a mysterious virus transmitted through rain. Six years after Danish citizens mysteriously began dying off quickly due to this virus of unknown origin, siblings Simone and Rasmus found a way to survive with their family and a small band of others as they search for safety and a cure. However, things grow complicated when Rasmus is exposed to the virus but shows no symptoms, leading others to believe he could be the key to reversing the apocalypse.

Here’s everything we know about the final season of The Rain.

When was The Rain Season 3 release date?

How many episodes did The Rain Season 3 have?

Season 3 of The Rain had 6 episodes, the same as Season 2 and a downsize from Season 1’s 8 episodes. As is customary with Netflix, all of the episodes dropped at once.

Is there a trailer For The Rain Season 3?

Yes! You can check out the trailer, which was released in July 2020, below.

Who returned for The Rain Season 3?

Additionally, the series saw one new main cast member for Season 3. Rex Leonard debuted as Daniel, who is living off the grid with his family and attempts to protect Simone from his father's wrath.

How did The Rain Season 2 set up Season 3?

Season 2 was tough on everyone. Rasmus’s relationship with the virus grew more complicated. His negative emotions like fear seemed to affect the virus within him, and he would release a virus cloud that could kill anyone nearby. This happened more than once, making Rasmus a danger to everyone around him. In the season finale, Rasmus gave himself up to Apollon in an attempt to figure out what is going on with him while also fulfilling their initiative to understand and replicate Rasmus’s adaptations to the virus.

Simone, having turned on Rasmus in the season finale and shot him as revenge for the murder of their friends, has now roped Martin into tracking Rasmus down. She knows that Apollon can be a dangerous group and doesn’t want her brother to be exploited by them any longer. Additionally, we learned that Sarah, Rasmus’s girlfriend, who we thought had died after he exposed her to the virus, has actually returned from the dead and is exhibiting similar virus-based abilities to Rasmus.

What is the plot of The Rain Season 3?

Considering it was the final season of the series, The Rain had many questions to answer. Simone is on the run, where she encounters Daniel and her family off the grid. There, she makes a game-changing discovery: A flower extract that’s capable of eliminating the virus. And something else is growing as well, as Simone’s kindling relationship with the new character puts her feelings about Martin to the test.

Meanwhile, at Apollon, Rasmus has used his condition to become the leader of a new crusade. Recruiting Fie and the newly-resurrected Sarah to his cause, he attempts to experiment on others, believing that the world can begin anew once everyone is infected. But Rasmus’ own deteriorating health shows that perhaps he is not able to practice what he preaches.

All 3 seasons of The Rain Season are streaming on Netflix.

More like this
Entertainment
Jan. 27, 2023
The Last of Us Season 2 renewal: Everything we know so far
By Eric Francisco
Entertainment
Feb. 2, 2023
Everything Wrong with Netflix’s New Password-Sharing Rules
By Dais Johnston
Culture
Jan. 26, 2023
Michael J. Fox’s strangest movie remains a stupid, ridiculous joy
By Mónica Marie Zorrilla
LEARN SOMETHING NEW EVERY DAY.

This article was originally published on May 25, 2019