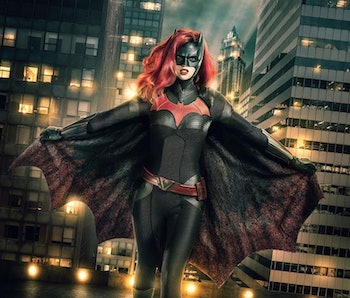 This article about Season 1 of the series Batwoman was originally published on May 16, 2019 and updated on June 13, 2021 following the release of the season on The CW. Read on for the original article, with some new changes to reflect the latest updates on this topic.

The Arrowverse continued to expand. On May 6, 2019, TV Line confirmed that The CW had ordered Batwoman to series.

Following the confirmation in May 2018 that the DCTV/CW Arrowverse would expand to introduce Kate Kane, a.k.a. Batwoman, into its lineup, Ruby Rose was cast in August 2018 to play the titular vigilante. Unfortunately, Twitter was ground zero for a heavy stream of mostly toxic criticism about Rose’s casting, with fans voicing concerns about Rose’s acting abilities and causing Rose to quit Twitter.

Thankfully, in the time between her casting news and her debut as Batwoman in the Arrowverse “Elseworlds” crossover event in December 2018, the first look at Batwoman was revealed and restored faith that Rose was the right person for the job and that the creative minds behind the show were dedicated to creating a Batwoman that honored the comics.

Here’s everything to know about Season 1 of Batwoman.

Batwoman was first introduced in DC Comics’ 2006 limited series 52. Over the course of the 13 years Batwoman has been a part of the DC Comics universe, it’s been revealed that Kate is from a wealthy family, which includes her father, military colonel Jake Kane, mother Gabrielle, and twin sister Beth. She is also Jewish and an out lesbian, the latter marking her as the first openly gay character in DC Comics history.

There are two notable similarities to Bruce Wayne’s origin story: Kate is a socialite by day and a vigilante by night. Kate also loses her mother and sister to gun violence after a group of gunmen take them hostage and kill their bodyguard as the family goes out for a special birthday dinner for the twins.

Kate grows up trying to recover from the loss of her mother and sister, eventually entering the military academy. Kate thrives, but is expelled under the regressive “Don’t Ask, Don’t Tell” policy after her relationship with Sophie Moore, a fellow cadet, is discovered.

After Batman saves her life and gives her front-row seats to the vigilante show, Kate decides that taking up the mantle is precisely what she needs to do with her life. Again, just like Bruce, Kate doesn’t have supernatural powers so much as special skills and abilities that make her a capable fighter. Those skills and abilities include (but aren’t limited to): archery; espionage; demolition knowledge; extensive weapons training; hand-to-hand combat proficiency, including Judo and Jiu-Jitsu; tracking skills; and expert medical knowledge.

When was Batwoman Season 1 released?

Is there a trailer for Batwoman?

The first full-length trailer for Batwoman arrived on Thursday, May 16, a week after a teaser was premiered (watch it above). The trailer established that Batwoman Season 1 would be all about Kate Kane’s superhero origin story, meaning it would occur before her appearance in the Arrowverse “Elseworlds” crossover event.

Previously, a Batwoman teaser trailer was released on May 6, 2019. The teaser showed the famous Bat-Signal shining into the Gotham night sky, cutting to Batwoman walking along a rooftop, looking out over the city. The 17-second clip confirmed the look and tone of the show (dark, moody, mysterious, thrilling, and all that jazz).

Who is in the Batwoman cast?

The Batwoman cast for Season 1 included:

What is the plot of Batwoman?

The DCTV “Elseworlds” 3-part event in December 2018 confirmed Kate is Bruce Wayne’s cousin (a slight change from the comics) but will have one of the most accurate superhero costumes in the Arrowverse as seen in quite some time (a detail faithful to the comics).

Batwoman was set in a Gotham where Batman has mysteriously left the city, and Kate has risen in his place to protect it. Just like the comics, Kate is an out lesbian with, according to The CW’s description of the character, a “passion for social justice.”

The CW’s logline for the show states that “In a city desperate for a savior, Kate must overcome her own demons before embracing the call to be Gotham’s symbol of hope.” Those demons include conflicts with The Crows, her father’s private security firm, and the Wonderland Gang’s leader, Alice.

2019 saw the absolutely epic “Crisis on Infinite Earths” crossover special, which Batwoman took part in. The show housed Part 2 of the series on December 9, 2019.

Was Batwoman renewed for Season 2?

Yes! Season 2 of Batwoman was ordered in January 2020, before the first season even finished airing. However, the second season looked very different. Most notably, Ruby Rose announced she would be leaving the series. Javicia Leslie was soon cast to don the cowl as homeless ex-convict Ryan Wilder. The 18-episode Season 2 premiered on January 17, 2021.

This article was originally published on May 16, 2019