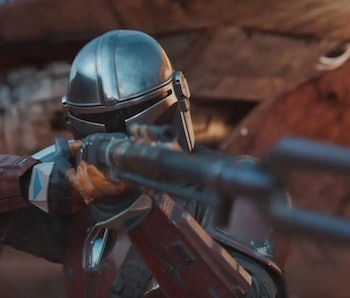 This article about Season 1 of the series The Mandalorian was originally published on October 29, 2019 and updated on June 11, 2021 following the release of the season on Disney+. Read on for the original article, with some new changes to reflect the latest updates on this topic.

Disney and Lucasfilm filled in the 30-year gap between Star Wars: Return of the Jedi and The Force Awakens with The Mandalorian, a television series made specifically for Disney+ that follows a lone gunfighter continuing the legacy of Jango and Boba Fett (at least in a vague capacity). The story is set several years after Return of the Jedi, and the entire first season will be a flagship series for the Disney+ launch in November 2019.

We’re talking about a lawless time in the Star Wars galaxy shortly after the fall of the Empire, so this story of a bounty hunter will probably feel a lot like a Western. The Mandalorians are a proud race of warriors prone to civil war, and their planet was eventually taken over by the Empire for a time.

Here’s everything we do know about The Mandalorian Season 1.

Is there a trailer for The Mandalorian?

Lucasfilm released some Mandalorian footage during Star Wars Celebration in mid-April, but a minute-long trailer (above) was released to the public on Friday, August 24, 2019, in the midst of Disney’s D23 convention. An even more extensive second trailer was released on October 28, 2019.

The first teaser was rather cryptic and took place on a desert planet resembling Tatooine. There are stormtrooper helmets staked into the ground, Carl Weathers paying the Mandalorian for some work, and plenty of action. “Bounty hunting is a complicated profession,” Werner Herzog’s crime boss says. The tone is decidedly more violent and mature than typical Star Wars shows/movies.

What is the plot of The Mandalorian?

The Mandalorian occurs after the Empire’s final defeat and before the First Order emerges, specifically 5 years after Return of the Jedi. At D23 in August 2019, showrunner Jon Favreau commented on the setup for the series, saying “chaos reigns because there’s no central government in the galaxy and so it degrades into a world where, like the old samurai movies and the old Westerns, where the gunfighters are roaming and people are fighting for their own safety.”

While the New Republic emerges to restore order to a fractured galaxy, many systems still exist outside of its jurisdiction. More commonly referred to as “Outer Rim territories,” these lawless planets serve as the setting. Think of the Wild West of the Star Wars galaxy.

The titular Mandalorian is a bounty hunter wandering the Outer Rim in search of credits. But everything gets turned upside-down when he finds a young member of Yoda’s alien race, affectionately coined by the internet as “Baby Yoda.” Now he must focus on solving the mystery of his new bounty while protecting him from multiple threats closing in.

What is The Mandalorian’s release date?

The first episode of The Mandalorian was released when Disney+ launched on Tuesday, November 12, 2019.

The Wrap reported in August 2019 that, similar to Hulu or DC Universe, Disney+ would add an episode each week — with 8 episodes in the first season — to the streaming service rather than dumping entire seasons all at once. The season finale dropped on December 27.

Who’s in the cast of The Mandalorian?

In early November 2018, Pedro Pascal — who played Oberyn Martell on Game of Thrones — was confirmed as the lead role of the Mandalorian.

Gina Carano (Angel Dust from Deadpool) was soon after confirmed for another leading role. By April 14, Lucasfilm had released the first official image of her and announced she was playing Cara Dune, a former Rebel shock trooper who has trouble adjusting to regular life.

Nick Nolte was also cast in a role as of November 2018. He was eventually revealed to be playing solitary Ugnaught Kuiil, though he’s barely recognizable under all those prosthetics.

At Star Wars Celebration in April, Weathers’ role was confirmed as Greef Marga, the nefarious leader of a bounty hunters guild.

Series showrunner Jon Favreau shared an image on March 21 via Instagram of Waititi recording lines as a droid that looks like IG-88, the bounty hunter droid who appeared in The Empire Strikes Back with Boba Fett. Waititi would voice a different bounty hunter droid: IG-11. Both within the show and in real life, the droid often gets mistaken for IG-88.

Herzog teased to IndieWire in March 2019 that his “small part” was as a “real villain.”

His character also appeared prominently in the footage during Star Wars Celebration. He’s some kind of crime boss akin to Jabba the Hutt, but perhaps even smarter.

By the end of D23 in August 2019, Entertainment Weekly reported that Esposito was playing Moff Gideon, a regional warlord who once served as a governor under Imperial rule.

Was The Mandalorian Season 1 nominated for any Emmy Awards?

The Mandalorian caught on like wildfire in the fall of 2019, and got some award show love as a result. Season 1 was nominated for a staggering 15 Emmy nominations, including Outstanding Drama Series, Outstanding Guest Actor in a Drama Series (Giancarlo Esposito), and Outstanding Character Voice-Over Performance (Taika Waititi). It won 7, all in Creative Arts categories like Cinematography, Music Composition, Special Visual Effects, and Stunt Coordination.

Was The Mandalorian renewed for Season 2?

Yes, and then some! The Mandalorian Season 2 aired from October 30 to December 18, 2020. The show was also renewed for Season 3, which has yet to film at the time of this article. Additionally, multiple spin-offs have been greenlit from the show, including The Book of Boba Fett and the limited series Ahsoka.

The Mandalorian Seasons 1 & 2 are currently streaming on Disney+.