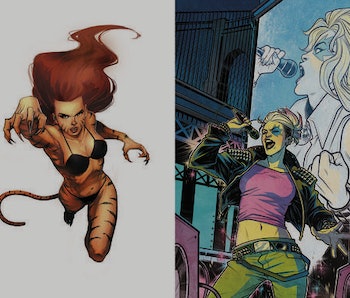 It’s time to Dazzle! As Disney-owned Marvel grows estranged from Netflix, the powerhouse studio is getting mighty cozy with Netflix competitor Hulu. And at one point, it was bringing two unlikely heroes together to the streaming service.

In 2019, Marvel announced a new interconnected animated franchise that lampoons the ambitions of the Marvel/Netflix shows. Along with Marvel’s Howard the Duck, Hit-Monkey, and M.O.D.O.K., there would also be Tigra & Dazzler, an animated series and the fourth piece in a comedic crossover that will create Marvel’s The Offenders.

Unfortunately, The Offenders project was canceled, along with Tigra & Dazzler. But here’s everything we know about what the series would have been.

When was Tigra & Dazzler going to premiere?

Tigra & Dazzler did not have a premiere date by the project’s cancellation.

Did Tigra & Dazzler have a trailer?

Tigra & Dazzler did not have a trailer by the project’s cancellation.

What was going to be the plot of Tigra & Dazzler?

In the comics, Greer Nelson is Dr. Joanne Tumolo’s lab assistant. The doctor put her through an experiment that would “enable a human being to attain his or her full physical and mental potential.” She became The Cat, and along the way, she met the Cat People, who used the soul of their greatest champion to save her life. She became possessed by Tigra.

Dazzler is Alison Blaire, a mutant with light-based powers who tried to balance a singing career with her abilities. She worked with several groups in the comics, including the X-Men.

As the description of the animated series revealed, these superheroes were going to find themselves just two among many with powers.

Marvel’s Tigra & Dazzler Show is a story about two woke superheroes and best friends, Tigra and Dazzler, as they fight for recognition among powered people who make up the eight million stories in Los Angeles.

“We are so excited to be the token lady show in this lineup,” writers and executive producers Erica Rivinoja and Chelsea Handler said in a statement. And we’re so thrilled to finally bring the world the cat lady and roller skating pop star show that they’ve been begging for.”

Who was in the cast and crew of Tigra & Dazzler?

Before its cancellation, Tigra & Dazzler experienced a lot of turmoil behind the scenes. Initially, the show was to be written and executive produced by Erica Rivinoja and Chelsea Handler. But in December 2019, Rivinoja and the entire writing staff were let go due to “creative differences.” Though Handler still stayed with Tigra & Dazzler, the show was still looking for a new showrunner when it was canceled.

Why was Tigra & Dazzler canceled?

Initially, Tigra & Dazzler was part of a four-series animation deal between Marvel Studios and Hulu. That slate also included Howard the Duck, Hit-Monkey, and M.O.D.O.K., with all four teaming up in a crossover special for The Offenders. However, almost a year after the announcement, in January 2020, The Hollywood Reporter announced that Tigra & Dazzler was being scrapped while still in development.

Were any other Marvel/Hulu series canceled besides Howard the Duck?

Yes! Howard the Duck also did not survive to see the light of day for unknown reasons. Though not formally scrapped, it’s assumed that means the intended Offenders crossover series will also not happen. The other two intended projects, though, are still a go. M.O.D.O.K. and Hit-Monkey are still being worked on, with the former set to air its ten-episode season on May 21, 2021.

There is no release date for Tigra & Dazzler on Hulu.