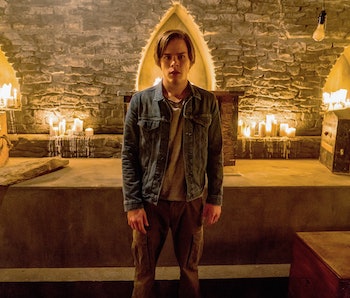 This article about Season 2 of the horror drama The Order was originally published on March 12, 2019 and updated on April 30, 2021 following the release of the season on Netflix. Read on for the original article, with some new changes to reflect the latest updates on this topic.

If you can’t get enough supernatural creatures and secret societies, you probably enjoyed The Order on Netflix. Jack Morton sets out to get a spot in a secret society on a college campus, only to find himself involved in much more than he could have imagined. With a major cliffhanger to end its first season, viewers were looking forward to what happened next.

Here’s everything to know about The Order Season 2 and its subsequent cancellation.

When was The Order Season 2 release date?

Is there a trailer for The Order Season 2?

Yes! Netflix released a trailer for Season 2 on June 15, 2020, only a few days before the season dropped.

What happened at the end of The Order Season 1?

When Jack arrives at Belgrave University in the series premiere, he has one goal. He wants to get into the Hermetic Order of the Blue Rose, avenge his mother’s death, and take down the man responsible: his father, Edward Coventry.

Over the course of the first season, Jack becomes entangled in not one but two secret societies: the Hermetic Order, where he learns magic, and the Knights of Saint Christopher, a group of werewolves.

By the end of Season 1, Jack is a werewolf, which should mean he’s out of the Hermetic Order, but he and the other werewolves also helped the Order defeat Edward Coventry.

Rather than choose sides, Jack wants to be independent. Instead, the Order seemingly makes the choice for him — and the rest of the Knights. Members of the Order take the memories of the werewolves. Jack’s love interest, Alyssa, takes his, and as she walks away, he not only doesn’t know her name, but he doesn’t know his own, either.

How Many episodes are in The Order Season 2?

There were 10 episodes in Season 2. That remains the same from The Order Season 1.

What is the plot of The Order Season 2?

According to the plot synopsis from Netflix:

In season two of The Order, the lines between good and evil are more obscure than ever. The Knights struggle to regain their memories stolen from them by The Order and they crave retribution. But vengeance is hard to plan when you’re also fighting murderous magicians, strange cults and life-threatening demons. Does anyone even go to class anymore?

Who is in the cast of The Order Season 2?

Was The Order canceled?

Unfortunately, yes. Netflix announced that The Order would be canceled after two seasons on November 14, 2020.