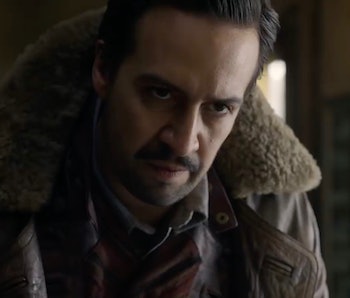 This article about Season 1 of the series His Dark Materials was originally published on September 12, 2019 and updated on June 5, 2021 following the release of the season on HBO. Read on for the original article, with some new changes to reflect the latest updates on this topic.

Are you ready to lose yourself in another world? Are you already a fan of The Golden Compass and Philip Pullman’s other books? Are you looking for a new show that you know won’t be canceled after one season? Then HBO’s His Dark Materials, with a stellar cast and novel concept, is the show for you.

Here’s everything we know about His Dark Materials, including its release date on HBO and BBC, along with the plot, cast, and news about Season 2.

When is the His Dark Materials release date on HBO and BBC?

HBO and BBC announced the official His Dark Materials release date on September 12, 2019 via a tweet. The series debuted on November 3, 2019 in the U.K. and November 4 in the U.S.

Where did His Dark Materials air?

In the United States, His Dark Materials aired on HBO, which is the international distributor. Over in the U.K., it aired on the BBC.

Is there a His Dark Materials trailer?

The official His Dark Materials trailer debuted at San Diego Comic-Con 2019 in July.

The trailer vividly outlines the story of Lyra, a young girl in Oxford whose uncle (James McAvoy) travels far away to the Arctic. Left under the care of the suspicious Mrs. Coulter (Ruth Wilson), Lyra uses a magical truth-telling device that allows her to see Mrs. Coulter’s true nature. Hoping to find the whereabouts of several missing children, Lyra teams up with Lee Scoresby (Lin Manuel-Miranda) and Iorek Byrnison, an armored polar bear, to combat the Magisterium, a perversion of the Catholic Church.

To say the least, a lot is going on, but it should all feel delightful and familiar to fans of Pullman’s original novels.

What is His Dark Materials about?

The television series is based on Philip Pullman’s series of three novels. As BBC One details, the first is Northern Lights (titled The Golden Compass in North America), in which the orphan Lyra looks for a missing friend only to uncover a mystical conspiracy that eventually leads her to other worlds.

“Northern Lights introduces Lyra, an orphan, who lives in a parallel universe in which science, theology and magic are entwined. Lyra’s search for a kidnapped friend uncovers a sinister plot involving stolen children, and turns into a quest to understand a mysterious phenomenon called Dust.”

This world includes the physical manifestation of a person’s soul in the form of a daemon, a beloved, and interesting, unique fantasy twist. The story continues in The Subtle Knife and The Amber Spyglass. Also, Entertainment Weekly reported in September 2019 that the series would adapt some material from Pullman’s prequel novel, The Book of Dust.

Who is in the His Dark Materials cast?

You should recognize much of the cast, which BBC and Bad Wolf initially announced in July 2018.

Ruth Wilson plays “the glamorous and mesmeric Mrs. Coulter,” whose presence in Lyra’s life leads her to London. There, she attends a glittering society party and learns about the “sinister” General Oblation Board. She encounters Will Keen’s Father MacPhail, Ariyon Bakare’s Lord Boreal, and Georgina Campbell’s journalist Adele Starminster.

The rest of the cast includes Lewin Lloyd as Roger Parslow, Daniel Frogson as Tony Costa, Tyler Howitt as Billy Costa, and Archie Banes as Pantalaimon.

Was there a His Dark Materials Season 2?

Yes! The series was preemptively renewed in September 2018, according to Deadline. The Golden Compass movie was a critical and commercial disaster, and sequel movies never even entered production. So the TV adaptation was able to do what the films could not, premiering a second season in November 2020. Season 2 was based on Pullman’s second novel in the series, The Subtle Knife. Shortly thereafter, HBO and BBC renewed His Dark Materials for a third and final season.

His Dark Materials Seasons 1 & 2 are currently available on HBO.