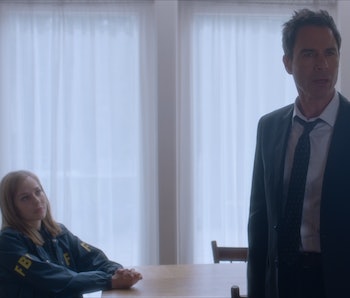 This article about Season 4 of the Netflix series Travelers was originally published on December 28, 2018 and updated on April 23, 2021, following the cancellation of the series. Read on for the original article, with some new changes to reflect the latest updates on this topic.

Netflix is packed with so many new programs, you’ll never get around to seeing all of them. But if you’re a science fiction fan, you’d do well to put Travelers at the top of that endless list. The series follows operatives (travelers) whose conscious minds are sent back in time to take over the bodies of people in the moments before their deaths. It’s up to them to save the world from a post-apocalyptic future.

Unfortunately, that chance of saving the world never ended up coming to fruition, as Netflix canceled the series before Season 4. Regardless, here’s everything you need to know about the season that never happened.

Spoilers for Travelers Season 3 below.

What happened at the end of Travelers Season 3?

In another attempt to save the world, Mac travels back 17 years into the body of his current host and sends an email to the Director, “Traveler program will fail. Do not send 001.”

Was Travelers Season 4 ever released?

No. In February 2019, star Eric McCormack tweeted a video where he announced Travelers was canceled.

“A lot of you have been asking about the possibility of a season four,” he wrote, “but many of you have been saying, ‘Look, if this is it, what a moving and surprising and profound ending it is.’ Well, I’m afraid it is. Who knows what the future holds, but Travelers Program 1, as we call it, is complete … Much love from 3468 in the 21st.”

Why was Travelers Season 4 canceled?

Netflix was silent about the reason why it canceled Travelers, as the streaming service usually does with its announcements. But a possible reason may be that the show was made by a studio outside of Netflix. The company canceled a number of its series that were made outside of the in-house production team, including American Vandal and the various Marvel series. Travelers itself had been picked up by Netflix from specialty channel Showcase after the first two seasons.

Related video: Learn About the Travelers Program in the Sci-Fi Series Trailer

This article was originally published on Dec. 29, 2018