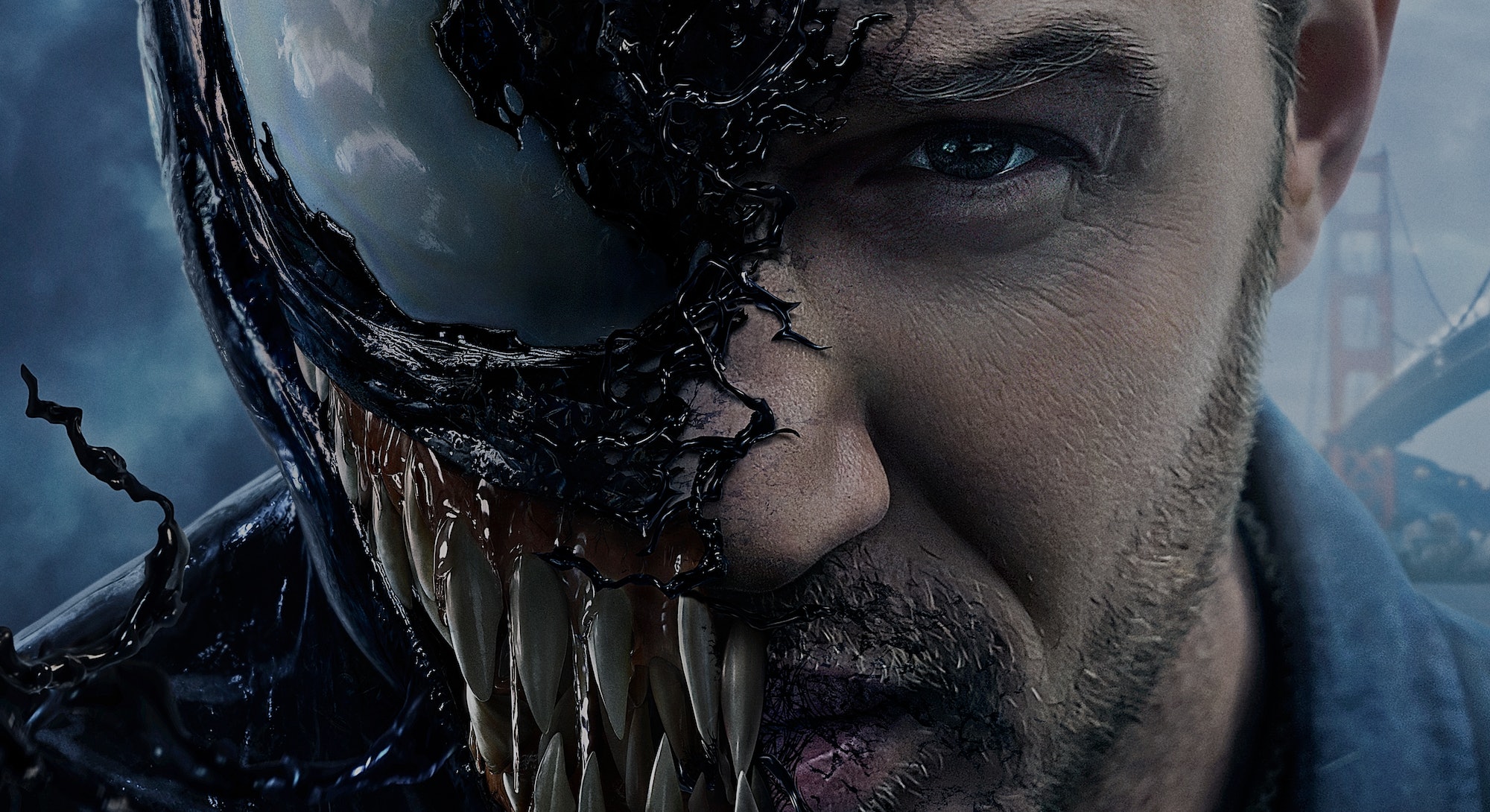 Here’s a simple truth to Venom: You already know if you want to see it or avoid it like the plague. If you’re a dude (and I’m really guessing you’re a dude) who digs violent comic book characters, you’re going to have a ball. But if you’re literally anyone else, Venom will be either an amusing escape from real life or an average action film with low cinematic ambition. Either way, it’s a movie about Venom, and that alone will decide one’s expectations.

Out in theaters on October 5, Venom stars Tom Hardy doing his Hardiest in a largely faithful adaptation of the Marvel anti-hero. Set in its own continuity, director Ruben Fleischer (Zombieland) does whatever a Spider-Man movie can, minus Spider-Man or properly utilized supporting cast that includes Jenny Slate and Riz Ahmed. The “In Association With” tag over the familiar red Marvel card feels less subtle than it’s meant to be.

In Venom, Eddie Brock (Hardy) plays a hard-boiled reporter whose star falls when he boldly bombs an interview with shady businessman/philanthropist Carlton Drake (Riz Ahmed), an awfully naked analog to Elon Musk. After coming into contact with an alien “symbiote” (pronounced exactly how it should), Eddie bonds with the bloodthirsty “Venom,” giving him inhuman superpowers.

There’s competently staged action scenes and wonderfully weird character work by Hardy, who pulls off the split personality of Eddie Brock and Venom. Venom succeed where you expect it to, but falls short in opportunities to stand out. It has Easter eggs that will please fans, but thankfully, doesn’t try too hard to force a new universe on fans already living in the multiverse.

Really, Venom feels like it belongs to the generation of early 2000s superhero films, where a chemical mix of dark action, light humor, and familiar comic book elements resulted in bizarre, pleasing movies.

Venom is a slimy, fluorescent story about an alien parasite with a tongue as long as your arm. Venom isn’t another Iron Man for the Marvel Cinematic Universe, it’s more like another another Blade.

The most damning thing about Venom is what it doesn’t do: Present a clear, emotional through-line from Eddie’s anger — at his broken career, at the billionaire who destroyed it, at himself for his hubris — to the Venom symbiote, an obvious metaphor for inner darkness. That’s a story you can’t get from Thor, Captain America, or Ant-Man. For all its faults, this is what Sam Raimi’s Spider-Man 3 did well with its version of Venom.

Venom is the least-present character in a movie titled Venom. When Venom is there, he’s the best thing on screen. But when he’s not, the movie suffers, and he isn’t there for long. Venom is little more than a supporting player in his own film, who acts as a sounding board for Eddie and a big excuse for big CGI battles.

Unexpectedly, there’s a bit of social justice in Eddie Brock’s character. It’s barely there, though, so it’s maddening Fleischer didn’t go all-in. Brock’s passion for journalism and its mission to do good is genuine, even if it’s hard to buy coming from his hulking frame. (Also, try not to laugh that his segment is titled “The Brock Report.”)

With San Francisco as his sandbox, a real city plagued by massive inequality and the influx of Silicon Valley wealth, there could have been more to Venom. Whereas most superhero movies say nothing, Venom saying anything, or biting off the heads of San Francisco’s gentrifiers would have been a bold thing to witness.

Still, Venom is fun. It’s a thrill with a compelling lead who makes weird but bold creative choices that might not always stick, but we can be thankful Hardy was given a wide berth to get weird. Fleischer knows how to balance darkness and humor in a way that I’m eager to see again, if only because a sequel can give ample time to let Eddie and Venom just be buds.

Hopefully Flesicher can get better at supporting casts; Ahmed plays a literal evil copy of Venom, Slate is given so little to do in a thankless role, and Michelle Williams as Eddie’s ex-fiancé, whose only interesting moment is a big spoiler, all threaten to derail the whole thing.

Venom is the movie comic book fans seem to want, for better or worse. Venom looks like Venom, the action is fun, the story isn’t too derivative from the source material, nor too uncharacteristic of a character who is supposed to be the villain and never the hero. The absence of Spider-Man might make Venom befuddling to grapple with for longtime readers, but taken on its own, it is a welcome introduction to a lethal protector.

Venom drops into theaters on October 5.